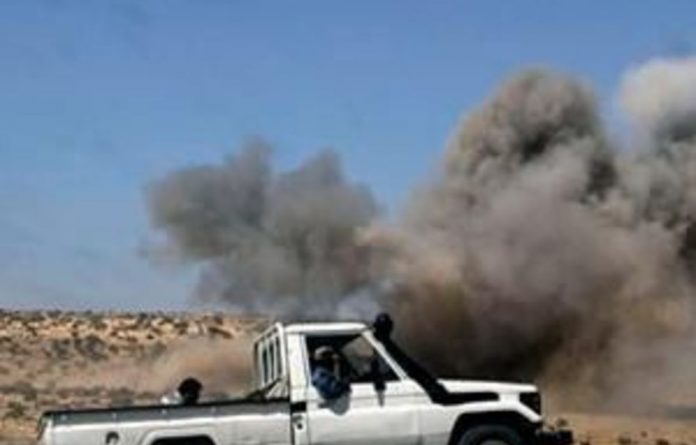 The head of Libya’s rebel army has accused Nato of being too slow to order air strikes to protect civilians, allowing Muammar Gaddafi’s forces to slaughter the people of the besieged city of Misrata.

Nato officials have said their six-day-old air campaign is now focused on Misrata, under daily attack by army tanks and snipers as the only big population centre in western Libya where a revolt against Gaddafi has not been crushed.

The rebels say it is not enough.

“Nato blesses us every now and then with a bombardment here and there, and is letting the people of Misrata die every day,” Abdel Fattah Younes, head of the rebel forces said in the eastern stronghold city of Benghazi. “Nato has disappointed us.”

The alliance said the pace of air strikes had not abated since it took over from a coalition led by the United States, Britain and France on March 31.

It now leads air strikes targeting Gaddafi’s military infrastructure and policing a no-fly zone and an arms embargo but is wary of hitting civilians.

Younes said rebels were considering referring what he said was slow decision-making by Nato to the UN Security Council which authorised its mission.

“Nato has become our problem,” he said.

Another rebel in Misrata, called Nasser, said two people had been killed and 26 injured in mortar attacks on Tuesday.

US approach
Stalemate on the front line of fighting in eastern Libya, defections from Gaddafi’s circle and the plight of civilians caught in fighting or facing food and fuel shortages has prompted a flurry of diplomacy to find a solution to the civil war in this oil-producing North African desert state.

A US envoy has arrived in Benghazi, site of rebel headquarters, to get to know the opposition and discuss possible financial and humanitarian assistance, a US official said.

The visit by Chris Stevens, former deputy chief of mission at the US embassy in Tripoli, reflects a US effort to deepen contacts with the rebels, whose uprising began on February 15.

Nato-led air power is holding the balance in Libya, preventing Gaddafi forces from overrunning the rag-tag band of rebels, who control eastern Libya and Misrata in the west, but unable for now to hand them outright victory.

“The reaction of Nato is very slow. One official calls another and then from the official to the head of Nato and from the head of Nato to the field commander. This takes eight hours,” Younes, a former interior minister in Gaddafi’s administration who defected, told reporters, adding: “Misrata is being subjected to a full extermination.”

Asked about Younes’s remarks, Nato spokesperson Oana Lungescu said: “The facts speak for themselves. The pace of operations since Nato took over has not abated. We have conducted 851 sorties in the past six days … we are fulfilling our mandate.”

Earlier in the day, Nato gave details of the campaign.

“The assessment is that we have taken out 30% of the military capacity of Gaddafi,” Brigadier General Mark van Uhm, a senior Nato staff officer, said in Brussels.

Near Brega in the east, where intense fighting raged for a sixth day on Tuesday, Nato aircraft struck a rocket launcher.

Rebels who were pushed back from the front line near Brega on Tuesday also said Nato was to blame. “Since the day Nato took over the air strikes, we have been falling back,” said Ziad el Khafiefy (20) a rebel fighter.

“Gaddafi’s troops are hitting us with Grad missiles,” said Mabrouk el Majbary (35). “Something is wrong … When the US gave leadership to Nato, the bombings stopped.”

Human shields
Van Uhm said Gaddafi was using human shields and hiding his armour in populated areas, curbing Nato’s ability to strike. “When human beings are used as shields we don’t engage.” Younes said the area where Gaddafi troops were did not include civilians, and Abdelsalam in Misrata agreed:

“Nato says Gaddafi’s forces are hiding among civilians. But we tell them that there are no civilians left in the areas where the Gaddafi forces are positioned. We urge them to destroy civilian property to take out the snipers and armed gangs.”

As the row erupted over the military campaign, the International Criminal Court said on Tuesday Gaddafi’s government had developed plans to crush protests by killing civilians even before the uprising in Libya broke out.

“We have evidence that after the Tunisia and Egypt conflicts in January, people in the regime were planning how to control demonstrations inside Libya,” court prosecutor Luis Moreno-Ocampo told Reuters in The Hague.

“The planning at the beginning was to use tear gas and [if that failed to work] …, shooting,” said Moreno-Ocampo who is investigating Gaddafi, his sons and close aides and who will be requesting arrest warrants in the coming weeks.

The rebels are set for a boost with the arrival of a tanker in one of their ports which can carry one million barrels of crude, worth more than $100-million, which would be their first shipment since the fighting broke out.

Diplomatic efforts to end the conflict have failed to make progress with the rebels adamant that Libya’s leader for the past 41 years leave and the government side offering concessions, but insisting Gaddafi stay in power.

“All armed militias, if they want a peaceful end to this crisis, they have to give up their arms, and then they are most welcome to take part in the political process,” Libyan Deputy Foreign Minister Khaled Kaim told reporters in Tripoli.

Libyan envoy Abdelati Obeidi ended a shuttle to Greece, Turkey and Malta to set out the position of the government, which said on Tuesday he had been appointed foreign minister. His predecessor Moussa Koussa, once a close ally of Gaddafi, defected to Britain last week.

Turkey is expecting an envoy to visit from the opposition in the coming days and is listening to both sides.

“Both sides have a rigid stance,” a Turkish Foreign Ministry official said after Obeidi’s visit. “One side, the opposition, is insisting that Gaddafi should go. The other side is saying Gaddafi should stay. So there is no breakthrough yet.” – Reuters