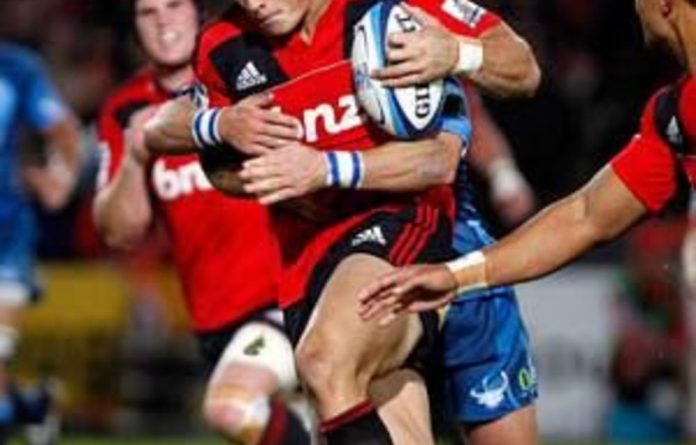 We have reached the introspective stage of the Super Rugby season, where pre-season optimism has been dashed and reality has come calling like a persistent Jehovah’s Witness. We used to joke that a South African side would win this week because two were playing each other. The success of the Bulls, Stormers and Sharks made us forget those dark days at the turn of the millennium, but the bad times are back after last weekend’s displays.

No one is ever surprised when the Crusaders win a game of rugby, but 27-0 against the Bulls at a country ground that holds 10000 people counts as at least unexpected. On the infrequent occasions that the Bulls have been bad in the past five years it has been due to a lack of adaptability. Their game is based on patience and forward domination and when that fails they have little to fall back on.

But the worrying signs that have been there all season came to the fore on Saturday as the Crusaders took them on up front and cut them to pieces in the backs. After his displays against the Sharks and Bulls, Sonny Bill Williams looms like a young Jonah Lomu in the South African psyche. The talk now is never of how to play your game, but how to stop him playing his.

We have forgotten what it was like because the Springboks and Bulls have won so many trophies in the past four years with a generation of great players. That generation is wearing out and while there is rich talent waiting in the wings, there is a natural desire from coaches and supporters alike to give the old troopers one more chance.

Bulls’ coach Frans Ludeke has at least grasped the nettle. His side for this week’s tussle with the Reds in Brisbane features five changes from the one that lost to the Crusaders. Injuries have removed Flip van der Merwe and Jaco Pretorius from the equation and he has benched Gary Botha, Deon Stegmann and Fourie du Preez. The latter’s absence means that Francois Hougaard will start at scrumhalf. That will come as something of a relief for national coach Peter de Villiers, who regards the youngster as his second-best number nine and was getting tired of watching him play on the wing.

De Villiers also complained to the press recently that Sharks’ coach John Plumtree was messing up his plans by playing John Smit at prop instead of hooker. Naturally he chose not to mention that Bismarck du Plessis is currently the best hooker in the world, thanks to a new maturity and understanding of the laws.

Injuries
Ironically, of course, if there was good news to be found last week it was in the play of a 2007 World Cup winning Springbok. While his colleagues from the team that won in France were struggling, JP Pietersen returned to form with a bang against the Lions, scoring the South African try of the season and creating two more with his power at close quarters and pace out wide.

Pietersen’s display, coming on the back of injury disruptions and a frustrating lack of form, helped put into perspective the malaise currently afflicting Bryan Habana. While Stormers’ coach Allister Coetzee has gone out of his way to protect his winger, the fact is that opposition teams used to worry about Habana in the way that our sides now fear Sonny Bill.

Naturally we should temper thoughts of Pietersen’s display with the fact that his opponents were the Lions. After steady strides in last year’s Currie Cup and a naive inability to close out games in Super Rugby this season, the wheels fell off at Kings Park last week. The Lions had a kick at goal in each half and never once threatened the Sharks’ try line.

To add injury to insult, coach John Mitchell has lost five players in the aftermath of defeat. James Kamana is out for the season with a broken ankle, George Earle and Josh Strauss were concussed, Derek Minnie hurt his knee and Andre Pretorius tweaked a hamstring.

The latter injury has been blamed for the last-minute team change that saw Elton Jantjies start the game in Pretorius’s stead last week. Pretorius allegedly told the coaching staff during the warm-up that he was struggling to kick and they made the decision to bench him there and then. Needless to say, it contributed to the side looking like a rudderless ship for much of the first quarter.

This week the Lions take on the Stormers in lulz Johannesburg and it is hard not to feel sorry for them. They haven’t won at home in Super Rugby since May 2009 and the visitors will be hurting after an unexpected loss to the Reds. In the overall scheme of things it might have benefited South African rugby if Habana got to play like Pietersen did last week, but on Wednesday he was ruled out with a shoulder injury.