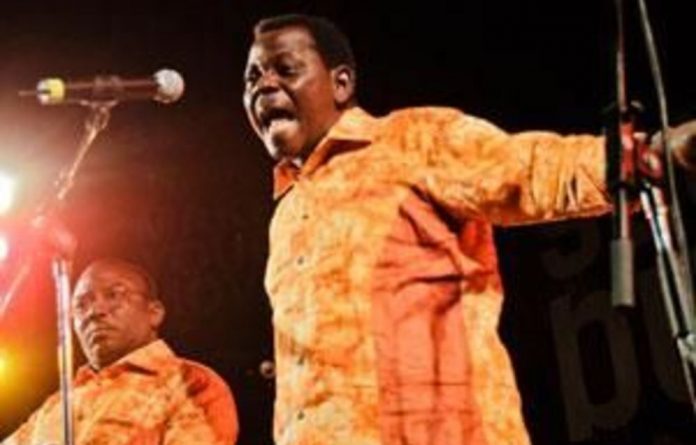 Libyan despot Muammar Gaddafi may be under fire for trying to crush a rebellion in his home country, but it was his security forces who were responsible, in 1982, for the stagnation of one of West Africa’s greatest bands.

But, as they say, you can’t keep good men down.

I am sitting opposite Vincent ­Ahehehinnou, the charismatic singer from Benin’s infamous Orchestre Poly-Rythmo de Cotonou at the Sauti za Busara music festival in Zanzibar.

Orchestre Poly-Rythmo de Cotonou has just finished a storming set at the festival as part of its current world tour in the build-up to the release of its first album in almost 30 years.

When I ask Ahehehinnou what it feels like to be back together as a band, making music after such a long time apart, he proceeds to tell me of the fateful day the band arrived in Tripoli, Libya, to perform at the Festival des Arts Negres.

“That trip was a bad one,” says Ahehehinnou, shaking his head.

When they arrived at the airport, the customs officials on duty confiscated the band’s equipment, convinced that they were trying to smuggle alcohol into the country.

A disaster
Frustrated when they couldn’t find any smuggled goods, the vengeful customs officials began to rip amps apart in their search and even threw some of the equipment out of a thirdstory window.

“It was a disaster for us,” says Ahehehinnou.

“Because we didn’t have our own instruments to play, we continued to play shows when we could get paid enough money to rent equipment and still make some money at the end of the night. It was very difficult for the band.”

Orchestre Poly-Rythmo de Cotonou pretty much entered retirement after that, sometimes coming out to perform the odd gig here or there.

And just like that, one of West Africa’s brightest shining stars was snuffed out.

Orchestre Poly-Rythmo’s roots can be traced back to the formation of Group Meloclem, a trio formed by bandleader and singer Melome Clement in 1964.

Burgeoning Benin music scene
The three musicians soon joined up with the Sunny Black Band in 1965 to form a nine-piece band that would later expand and change its names to Orchestre Poly-Disco, Orchestre El Ritmo and finally Orchestre Poly-Rythmo de Cotonou in 1969.

Between 1969 and 1982, the band was the highlight of a burgeoning Benin music scene, sharing bills and studio time with Nigerian Afrobeat legend Fela Kuti and his band Africa 70. Its output over this period is thought to be more than 500 recorded songs.

Fast forward to 2005, and vinyl collector and Analog Africa record label boss Samy Ben Redjeb arrives in Benin, trying to track down rare Orchestre Poly-Rythmo de Cotonou tracks to license for some reissues he was planning. “When Benjy [Redjeb] came to us the first time, we didn’t think what he could do for us,” says Ahehehinnou. But it turned into a huge opportunity for the band.

The two resultant compilations: The Vodoun Effect: Funk & Sato from Benin’s Obscure Labels 1972 ­- 1975 and Echos Hypnotiques: From the Albarika Store 1969 – 1979 introduced the band to the global music world once again and a new fan base began to build for this legendary group.

Compiling 29 powerhouse tracks across two CDs, Redjeb’s compilation also offered a wealth of never-before-published photos and a detailed history of the band told in the words of its most famous members.

“Samy did very professional work,” says Ahehehinnou quite simply, but the high esteem with which he regards Redjeb is obvious in his body language.

With Analog Africa’s two Orchestre Poly-Rythmo compilations receiving rave reviews, it was only a matter of time before the band reformed to take its music around the world.

With the band out of action for so long, one would expect that a new album almost 30 years later may be a push too far, although a few listens to Cotonou Club have confirmed that Orchestra Poly-Rhythm de Cotonou still has the fire burning deep inside it and its live set at the Sauti za Busara festival rammed the point home.

“For the new album, we rerecorded old songs with new musicians, but we also recorded new songs,” says Ahehehinnou.

One of the album’s 1970s highlights, Gbeti Madjoro, gets a stellar reworking with Benin’s current global star Angelique Kidjo guesting on vocals, while Von Vo Nono is recreated in a more laidback style than the original recorded by Benin composer ­Gnonnas Pedro.

Interestingly, the final song, which is flagged as a bonus track, is a collaboration between Orchestre Poly-Rythmo de Cotonou Club and Scottish indie-rockers Franz Ferdinand.

They say you can’t teach an old dog new tricks. Orchestre Poly-Rythmo de Cotonou doesn’t need to learn new tricks. It still has enough old ones to have the crowd heaving to its funky beat.

“See you on Saturday,” says Ahehehinnou, referring to the band’s second scheduled performance at the Sauti za Busara festival.

I wouldn’t miss it for the world.