Rwanda draws strength from its pain 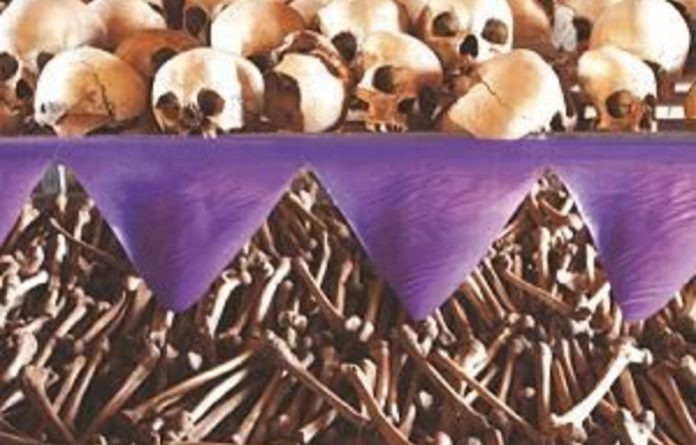 It is the end of the week of commemorative events throughout Rwanda to mark the 17th anniversary of the genocide of the Tutsi people, which took place between April and July of 1994.

I am in Kigali, the capital of Rwanda, and 27-year-old poet and filmmaker Edouard Bamporiki is sharing his painful memories — those of a child who witnessed the carnage.

The first time that Bamporiki realised he was a Hutu was when he was eight years old. He was in grade three and his teacher gave the class “homework” – to ask their parents what their ethnic groups were. The following day, after the pupils had revealed their ethnic identity to the teacher, he was excited to learn that his ethnicity was in the majority.

The feeling of excitement that Bamporiki describes is one of child-like innocence, a feeling of the strength of his identity in numbers.

“We immediately formed ourselves into Hutu and Tutsi soccer teams,” he says. Because his Tutsi classmates did not have enough on their side to form a team, “we gave them some Hutus and started playing against each other”.

A year later, Bamporiki was to witness how that playful response to the issue of difference could be transformed on a national stage into genocide. At the end of it and when the schools reopened, none of the Tutsi boys he had played soccer with returned. “I was so confused,” he says. “They were my friends.”

Bamporiki witnessed first-hand the horrors that became commonplace in every town and village. He wrote his first poem, whose title in his home language translates into the words, “If they were not exterminated, we would be laughing together”. He continued to write poems about the genocide (“I write because of this cross,” he says) and won awards and invitations to recite his poetry at genocide commemoration events.

‘Bloody rampage’
The recent commemorations that took place across Rwanda recalled the genocide in which an estimated one million Tutsis and some Hutus were slaughtered — a bloody rampage that went on for 100 days.

The start of the commemorative period — seven days of mourning beginning on April 7 — was marked by a solemn event in a packed and overflowing 40 000-seater stadium in Kigali.

At times the quiet and stillness in that stadium were overwhelming. Then during solemn speeches there were outbursts of wailing and the sound of sobbing — but even the people’s grief had a sense of quiet reverence. Rwandan President Paul Kagame captured that sense when he spoke in his native Kinyarwanda language to the thousands of survivors and mourners packed in and around the stadium. One could sense, even without using the simultaneous translation service, the urgency in Kagame’s voice.

Speaking under a banner proclaiming the theme, “Upholding Truth: Preserving Our Dignity”, Kagame said: “The body of Rwanda was tortured, assaulted and succumbed but the spirit never died.” He chose his words carefully to convey his meaning clearly to each of the thousands of Rwandans who had come to mourn their dead collectively, as a nation, for the 17th time.

“There is a lot of pain and sadness,” he said, “but we have to take seriously the meaning of these two words — truth and dignity.” An earlier public testimony by a survivor of the genocide gave weight to the notion of dignity – violation destroyed the human spirit and stripped victims of their dignity.

To bear witness to the stories of family members of victims and the survivors of such horrific crimes in essence honours their memory, acknowledges their humanity and helps them to reclaim their sense of dignity. These testimonies also have a significance that sometimes goes beyond the lives of victims and survivors to move others to speak truthfully in ways that they were previously unable, or afraid, to do.

Bamporiki gave a testimony of what he witnessed as a child when the genocide broke out on that day in April 1994. He had been admitted to hos­pital when the genocide broke out and a man carrying a baby had hidden under his bed. Early the following morning, a group of machete-wielding men burst into the ward looking for Pierre (not his real name). They were singing the “genocide song”, a song about killing all Tutsis, and were calling Pierre, telling him to come out.

Unmistakable pain
When Bamporiki described the moment when Pierre spoke out from under the bed and said, “I am here”, the pain in his eyes was unmistakable. “I can never, ever forget that voice that pierced through me from under my bed at the hospital,” he said.

What he saw next and Pierre’s piercing voice is a scene that remains sharply etched in his memory no matter how hard he tries to forget. Pierre laid dead on the floor, the baby still in his arms. Then one of the men killed the baby in Pierre’s dead arms.

I visited the Kigali Genocide Memorial. It contains the remains of 250 000 people buried in mass graves covered in wide slabs of concrete, slabs that cascade down several levels of the garden sanctuary. Some of the graves are framed in borders of face brick that make them look like flower beds and roses are planted on top of the graves. The roses, unlike those carefully manicured flowers in the many gardens around Kigali (landscaping is very much a feature of the city), are carefully stripped of their leaves so that they look like desolate flowers growing in the desert, yielding beauty in spite of what lies beneath.

As we drove south from Kigali to Butare, the driver pointed out several marked mass graves. Butare is where the Murambi Memorial is, which houses the most visible aspects of the genocide against the Tutsi.

The Rwandan countryside is one of the most beautiful landscapes I have ever seen — the hills roll into each other with stunning green beauty. It is simply unbelievable that scattered in the hills and forests of this beautiful country (Rwandans call it the country of a thousand hills) are mass graves as yet undiscovered.

But Rwanda is healing itself. The Rwandans’ journey after the genocide is an incredible story of a search for lasting peace, unity and economic stability. To have witnessed such a dearth of humanity reminded me of the history of my own country.

Differences
There are similarities, yet the differences are also quite significant. One difference is that Rwanda is facing its past, confronting it, but is careful to emphasise learning from the past to prevent its repetition.

“When we say never again, it means exactly that — we should never allow this to happen again,” Kagame said in his speech at the stadium in Kigali. “Fellow Rwandans, the sadness and pain we have is understandable, but we should draw strength from this to heal ourselves and to build our future.”

He was echoing the sentiment in the famous words of Spanish philosopher George Santayana, who remarked that “those who do not remember the past are condemned to repeat it”. Facing our history and confronting our shame about it can help us understand how human depravity creeps in ever so imperceptibly.

Dialogue about a past characterised by racial mistrust and different dimensions of violence could help restore confidence and trust in our future. Facing each other in the spirit of dialogue could also help us reclaim the better angels of our nature.

Bamporiki said that for many years he was burdened by shame as a Hutu. Once, when he travelled to France to receive an award for one of his films, he was asked by a Frenchman if he had killed any Tutsis. “Come on now, Edouard,” the Frenchman said, “you are Hutu, you must have killed some Tutsis.” Bamporiki could not respond.

Flying back home, he realised that his shame for having witnessed the slaughter of Tutsis and having the “advantage” of being Hutu was a noose. Engaging that past, both directly and in creative ways, has helped him heal the shame.

His award-winning film, Long Coat, is about a Hutu man who refuses to confess to killing his neighbour. But it is also more than that. His screening of the film in a prison in Kigali prompted the inmates who participated in the genocide to organise the first-ever confessional commemoration of the genocide by the prisoners themselves.

From the stories of Tutsi and Hutu students at the national University of Rwanda forming reconciliation clubs, of the “genocide widows” in Karama village in the south working with women whose husbands are serving prison terms for the genocide and of the orphans joining forces to create “families” to support one another at university, there is real hope and a prospect for peace in Rwanda.

And, judging from the way Rwandans speak about Kagame and the morale they say he inspires, and in spite of his faults, he seems to carry the hope of his people on his shoulders and in his heart.

Pumla Gobodo-Madikizela is professor of psychology at the University of Cape Town. She writes from Kigali. Her trip to Rwanda was funded by UCT as part of her research on reconciliation in the aftermath of mass trauma and genocide