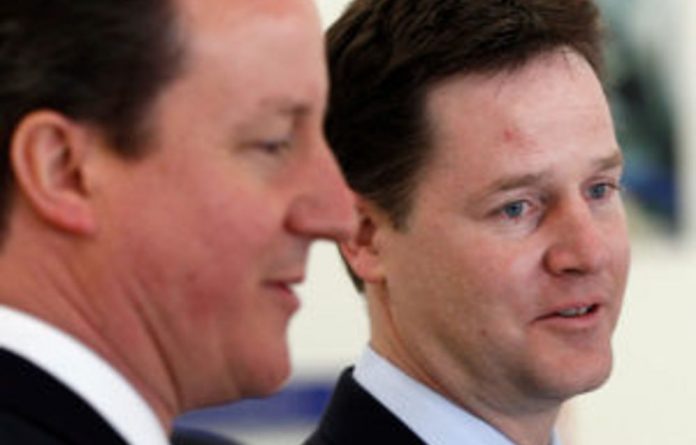 British voters looked set on Thursday to reject a change in the way they elect their lawmakers, as they cast their ballot in a national referendum that has threatened to tear the ruling coalition apart.

Bitter campaigning for the vote opened up a rift between the centre-right Conservative party and the smaller Liberal Democrats just one year after they joined forces in an unlikely political marriage.

Opinion polls indicate a landslide win for the campaign led by Conservative Prime Minister David Cameron to keep Britain’s long-standing “first past the post” system, in which the candidate with the most votes wins.

Deputy premier Nick Clegg, the leader of the centrist Lib Dems, looks set for a humiliating defeat in his campaign to introduce the alternative vote (AV), in which voters rank candidates standing in a parliamentary constituency in order of preference, with the lowest-scoring candidate eliminated through a series of rounds and their votes re-allocated to their rivals until one gets more than 50%.

But the issue has largely failed to interest the public as both sides have struggled to get their message across amid the royal wedding between Prince William and Kate Middleton, followed by the death of Osama bin Laden.

Some polling stations in London were largely empty after they opened at 6am GMT, AFP reporters said. They were to close at 9pm GMT, but a result was not expected until Friday evening.

Britain has only held one other nationwide referendum in recent times, when voters in 1975 backed the country’s continued membership of the European Economic Community, now the European Union.

“It is a vital day for our democracy. We mustn’t sleepwalk into a second-rate voting system that damages our democracy permanently. So I urge you to say ‘No’ to AV,” Cameron wrote.

The “Yes” campaign has a host of celebrity supporters including actor Colin Firth, who won an Oscar in February for his performance in The King’s Speech.

The Conservatives only agreed to hold the referendum after Clegg’s Lib Dems, normally the third-placed party, made it a condition of joining forces to form a government after a general election one year ago.

Clegg had earlier pushed for what he said would be transformative change to Britain’s political system — but even he seemed to struggle to muster enthusiasm as he cast his ballot in Sheffield, northern England.

He urged Britons to “get stuck in and join in on the referendum on our voting system to make our politics a bit better and a bit fairer”.

Despite a lack of public interest, the bitter war of words between the coalition partners nevertheless garnered headlines.

Clegg has accused the “No” camp of “lies” and Lib Dem Energy Minister Chris Huhne sparked headlines with allegations of an alarmist campaign using tactics he likened to those of Nazi propaganda chief Joseph Goebbels.

The row spilled over into a row in Tuesday’s weekly Cabinet meeting.

The referendum and local elections are the first major electoral test for the coalition since it started pushing through unpopular cuts to tackle a record deficit.

But Tony Travers, a political analyst from the London School of Economics (LSE), said he believed the coalition would still stick together “for four, possibly for five years”.

“For the Liberal Democrats, however much they may hate being in government, and some of them clearly don’t find it very comfortable, they’re now stuck with the coalition otherwise they’ll look as if they made a mistake,” he said. — AFP