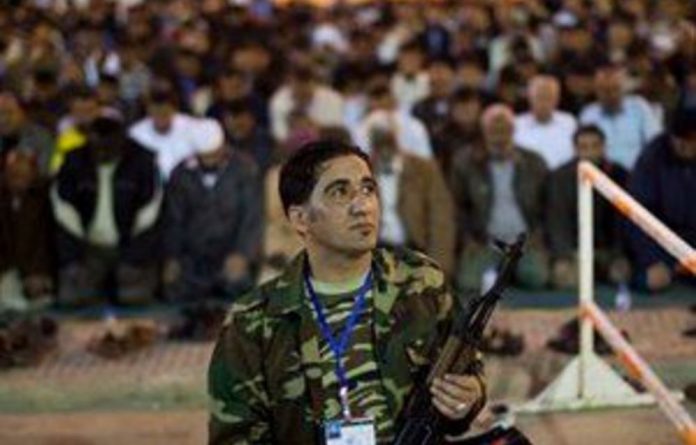 Police officers in riot gear and armed with wooden staves have been manning fuel pumps at a petrol station in Tripoli as long queues of cars caused traffic chaos in western Libya, amid fears that the Gaddafi regime is running out of its most precious commodity.

Queues of vehicles, sometimes five or six deep, stretched up to half a kilometre from some petrol stations last week, most of which are shut behind makeshift barriers. Two men in a queue near the city of Zuwara said they had been waiting for five days in the hope of a fresh delivery.

At the few stations around the capital, where cars were inching forward, armed soldiers and police attempted to keep order as motorists and pedestrians carrying containers jostled to get served. Fights sometimes break out, according to locals.

The Libyan government has blamed the fuel crisis on its own “mismanagement of distribution”. But deputy foreign minister Khaled Kaim also accused the international community of “trying to starve the Libyan people by cutting all supplies to 5,2-million people in the south and the west of the country”.

The dearth of fuel is the most obvious sign of the economic impact of the crisis that has engulfed Libya for more than two months. But cigarette prices have doubled in the past month; bread is in short supply since Egyptian bakery workers fled the country; cash withdrawals from banks have been capped as the government faces a currency shortfall; many shops are shuttered as both supplies and customers dwindle.

Nato has confirmed that 18 warships are patrolling waters outside Tripoli’s port to inspect cargo ships which could be carrying arms or other materials of potential military use to the regime. The sea embargo does not include deliveries of food, drugs or other basic needs, Nato said. However the terms of UN resolution 1970 covers any product deemed by Nato intelligence as destined for the Libyan military which could be used to attack civilians. “This can include the interception of oil tankers,” a spokesperson said.

Trade with Libya’s National Oil Corporation is banned under the UN embargo. However, in early April, the government circumvented sanctions when it imported fuel from Italy via Tunisia, transferring the load to a Libyan-owned ship outside the UN blacklist.

Despite being an oil-producing country, Libya has limited refining capacity and in normal times imports most of its gasoline. Consumer prices are heavily subsidised, and since the crisis began the government has slashed reduced the cost of a litre. But low prices have little meaning when pumps are empty.

Libya’s main refinery is in Tobruk, in the far east of the country and now in rebel hands, along with a second refinery in Ras Lanuf. The government is trying to increase capacity at its third refinery in Zawiya, around 50km west of the capital.

The government is reluctant to discuss the fuel crisis, and journalists are instructed not to film petrol queues or interview people waiting in line. Unauthorised conversations reveal varied views about who is to blame for shortages. In Zuwara, 110km west of Tripoli, Tariq Dobroz (35) one of those who had been waiting for a delivery for five days, said: “I’m angry. Before [the crisis], life was getting better. Now things are bad.”

In Tripoli’s old city, a gold and silver trader bitterly listed his grievances: “Business is bad; benzine, it’s finished; cigarette prices have doubled; food prices have risen.” Asked if he blamed the west, he said elliptically: “No, other things,” referring to the regime.

A foreign diplomat in the capital said people in fuel queues were likely to turn their anger on the international alliance against the Libyan regime. “They are saying ‘we’re not involved in this yet we’re being punished.'”

The regime’s economic difficulties are exacerbated by problems over cash supply. Withdrawals from banks are limited to 1 000 dinars a month amid fears that currency supplies are running low. According to finance minister Abdulhafid Zlitni, Libyans are hoarding cash — common in times of uncertainty — while a consignment of currency printed under contract in the UK has been hit by sanctions. “It’s our money, and we paid for it,” he said.

The International Monetary Fund estimated in February that the Libyan regime had more than $100-billion in foreign reserves. A significant proportion is believed to be beyond the reach of sanctions.

The government has encouraged shopkeepers to open, despite the lack of customers, to keep an appearance of normality, although in fact many shops in Tripoli and other cities are shuttered. The owner of a women’s clothing store in Tripoli said he had been ordered to open his shop daily despite the fact that “I have no materials to sell”.

Most restaurants and cafes are closed in the evenings. “People are scared to go out because of the shooting,” said the shop owner, referring to the gunfire that echoes around the city after dusk, often accompanied by the sound of Nato warplanes and anti-aircraft fire.

Some officials are phlegmatic about UN sanctions, saying Libya has survived them before and will again now. “Just go back to history,” said Zlitni. “When sanctions were imposed in the 1990s, Africans just broke them. We managed to take a lot of precautions and were able to avoid a lot of problems” But the official message is — as ever — one of anger directed at Nato and the international alliance. The purpose of the blockade “is to try to force problems in cities and towns in the west”, said Kaim. “The motive of Nato is clear: attacking from the air, surrounding the country with warships, cutting supplies by sea, trying to starve the people.

“It’s not moral, not legitimate and not acceptable… But it’s not strange. Hitler and Mussolini, both of them were democratically elected but they committed atrocities. Once again, we can see western leaders committing atrocities in Libya or somewhere else.” – guardian.co.uk