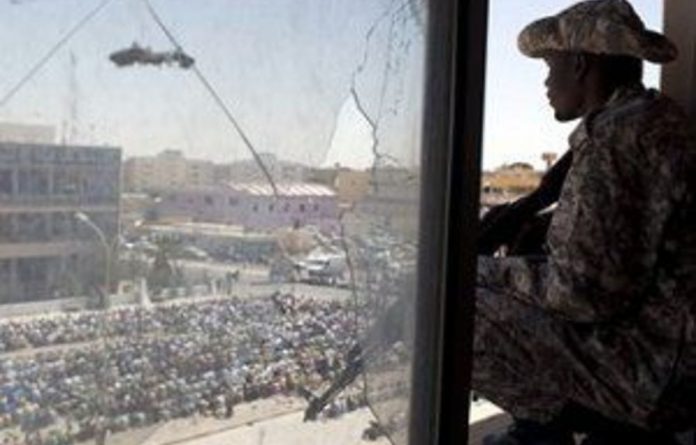 Meanwhile, rebels were bracing for a ground assault by Gaddafi forces on the besieged western city of Misrata as Nato warplanes struck regime targets further to the west.

And late Friday, Libyan tribal leaders eyeing “a new era of peace and forgiveness”, called for a general amnesty law for fighters on both sides of the conflict.

The fund, agreed at a meeting of the International Contact Group on Libya on Thursday, is intended to provide an emergency lifeline to the rebels, whose provisional administration has no source of financing to replace receipts from oil exports, which have come to a virtual halt.

It will initially receive international donations. Blocked assets — estimated to be worth $60-billion in Europe and the United States — are to be used at a later date.

“Libya still, according to the international law, is one sovereign state and any use of the frozen assets, it’s like piracy on the high seas,” Deputy Foreign Minister Khaled Kaim said.

Wealthy Gulf states Kuwait and Qatar have pledged to be major donors.

The funds made available are far less than the $3-billion sought by the rebels, but their leader, Mahmud Jibril, said “it’s a good start.” He said $3-billion represents “a six-month budget”.

French Foreign Minister Alain Juppe said the new fund could be up and running “within weeks”.

However, he said it would take longer to tap Libyan government assets frozen abroad under UN sanctions to secure a longer-term credit line sought by the rebels, as unblocking the assets “poses legal problems.”

Kaim, the deputy foreign minister, said there would be no let-up in the government’s attempts to block off the maritime lifeline to Misrata — the rebels’ last bastion in the west.

“We will not allow those ships to bring arms to the city and then to evacuate some criminals,” he said, after an International Organisation for Migration ship on Wednesday offloaded supplies and onloaded refugees at the city’s port under shelling by Gaddafi forces.

Speaking in the rebel stronghold Benghazi, a Misrata representative on the rebels’ National Transitional Council said the city was bracing for a ground assault by Gaddafi forces.

Suleiman Fortiya said loyalist troops were massing in Zliten, outside Misrata, with fighting going on there and in other suburban areas with many casualties on both sides.

“I am sure there will be a lot of fighting on the ground in the future. That is what Misrata is worried about because he [Gaddafi] is doing a big preparation to march on Misrata.

“This army will be coming from Zliten and most likely will come wearing civilian clothes.”

A resident of Misrata contacted by telephone said there had been clashes on the outskirts of the city, including in Tumina suburb in the east, Tuya in the west, and Giran, about 20km to the south.

An aid worker said he had heard heavy artillery fire after midday coming from “deserted neighbourhoods” in the city but was unable to determine which ones exactly.

Nato said its warplanes had hit nine ammunition dumps, three tanks, and two rocket launchers around Zintan on Thursday in the western Djebel Nafoussa mountains, where a pocket of rebels are battling Gaddafi forces.

It said alliance jets also struck ammunition dumps, tanks and a communications facility in other areas of western Libya, which is mostly in the hands of loyalist forces.

“The scale of the relentless attacks that we have seen by Gaddafi forces to intimidate the residents of Misrata for more than two months is truly horrifying,” said Amnesty senior adviser Donatella Rovera.

“It shows a total disregard for the lives of ordinary people and is in clear breach of international humanitarian law.”

France announced it ordered 14 people who served as Libyan diplomats under Gaddafi’s regime to leave the country within two days.

At the Rome meeting, US Secretary of State Hillary Clinton had called on the international community must do more to isolate Gaddafi’s regime by expelling all diplomats loyal to him.

Britain ordered two Libyan envoys to leave London on Thursday. It had already expelled the ambassador.

“The general amnesty law is a means of laying the path ahead for a new era of peace and forgiveness,” the National Conference for Libyan Tribes, which met in Tripoli, said in a statement at the end of its session.

The conference didn’t provide further details on the law, or a timetable for its passage.

Government spokesperson Mussa Ibrahim had said the tribal leaders represented tribes from across the country, including those from the rebel-held east.

However, parts of the statement referred to rebels as “traitors” and pledged not to “abandon” or “forsake” Gaddafi, raising doubts about both calls for reconciliation and the overall representativeness of the conference. – AFP