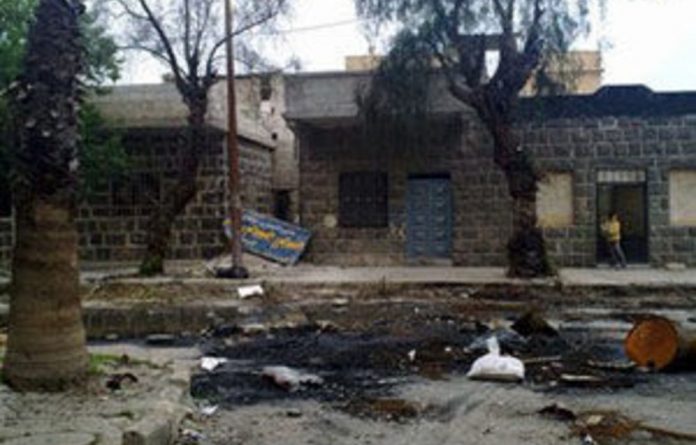 Thousands of students meanwhile defied the crackdown to stage a protest in Syria’s second-largest city Aleppo late on Wednesday before being dispersed by baton-wielding loyalists and security force personnel, a rights activist said.

Syrian armed forces continue to intensify the campaign against a two-month uprising, shelling key cities within the country and detaining hundreds of protesters. We take a look at developments over the last two weeks.

At least 19 civilians were killed on Wednesday as troops and unknown gunmen assaulted protest hubs across the country, shelling and firing on some and encircling others with tanks, according to accounts by human rights activists.

Among the dead was an eight-year-old boy, said the head of the National Organisation for Human Rights in Syria, Ammar Qurabi.

Sniper fire killed 13 people, including the youngster, in the village of Al-Harra, near the protest centre of Daraa, south of Damascus, Qurabi said.

Tank fire killed five people in the Baba Amr district on the outskirts of the central industrial city of Homs. Another civilian died in Jassem, near Dara’a, he added.

Two soldiers were killed and five others wounded in clashes with “armed terrorist gangs” in the protest hubs of Homs and Daraa, state news agency Sana reported.

The deadly confrontations occurred as troops and security forces “arrested dozens of wanted men and seized large quantities of weapons and ammunition in the Bab Amr neighbourhood of Homs” and in Daraa.

The army also kept up its sweep of the flashpoint Mediterranean town of Banias, scouting for “protest organisers yet to be arrested”, said Rami Abdul Rahman of the London-based Syrian Observatory for Human Rights.

Between 600 and 700 people have been killed and at least 8 000 arrested since the start of the protest movement in mid-March, human rights groups say.

The Syrian authorities insist they are pursuing “armed terrorist gangs”.

In Washington, the State Department denounced the crackdown as “barbaric”.

“These repressive measures — namely the ongoing campaign of arbitrary arrests, the denial of medical care to wounded persons, the inhumane conditions of detainees — are barbaric measures that amount to collective punishment of innocent civilians.”

Toner added that “we don’t throw the word ‘barbaric’ around here very often” but that in this case, “the window is narrowing for the Syrian government to shift focus from its outright repression towards meeting the legitimate aspirations of its people”.

Analysts said the Obama administration is still reluctant to call for an end to Assad’s increasingly violent and repressive regime fearing that a revolution in Syria could bring chaos to a key part of the Middle East with significant repercussions for Lebanon, Iran and beyond.

Russia, a traditional Damascus ally, rejected calls for a special UN Security Council meeting on Syria to condemn the crackdown.

In the face of the persistent violence, the UN agency for Palestinian refugees suspended operations for 50 000 people in central and southern Syria, while UN chief Ban Ki-moon called for an end to “excessive force”.

“I urge again President [Bashar] al-Assad to heed calls for reform and freedom and to desists from excessive force and mass arrest of peaceful demonstrators,” the UN Secretary General told journalists in Geneva.

EU foreign policy chief Catherine Ashton said the bloc will look at fresh sanctions this week against Assad’s regime after already homing in on his inner circle.

“We started with 13 people who were directly involved” in cracking down on protests, she told European MPs pressing her to explain why al-Assad was spared.

“We’ll look at it again this week,” she added. “I assure you that my intention is to put the maximum political pressure that we can on Syria.”

The government said it formed a commission to draft within two weeks a new law to govern general elections that meets “international criteria”, Sana reported.

“Our goal is to draw up an electoral law that is similar to the best laws across the world,” said Deputy Justice Minister Najm al-Ahmad.

Protesters are demanding free elections, the release of political prisoners, constitutional changes that would strip the ruling Baath party of its hegemony over Syria as well as new media and political parties laws.