Gaddafi defies efforts to dislodge him 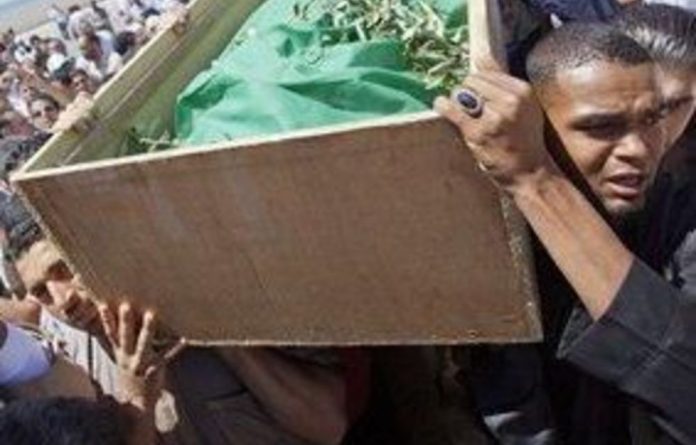 Nato must broaden the range of targets it is bombing in Libya or risk failing to remove Muammar Gaddafi from power, Britain’s most senior military officer was quoted as saying on Sunday.

Nato warplanes, acting under a United Nations mandate to protect civilians, have stopped government troops advancing on rebel strongholds but the collapse of Gaddafi’s rule, which many Western governments seek, has not materialised.

After a fresh series of air strikes on his Bab al-Aziziyah compound in Tripoli, Gaddafi taunted the Western military alliance, saying in an audio recording aired on Friday that he was in a place where Nato could not reach him.

General David Richards, Britain’s chief of defence staff, said the military campaign to date had been a “significant success” for Nato, but it needed to do more.

“If we do not up the ante now there is a risk that the conflict could result in Gaddafi clinging to power,” he was quoted in the Sunday Telegraph newspaper as saying.

“At present, Nato is not attacking infrastructure targets in Libya. But if we want to increase the pressure on Gaddafi’s regime then we need to give serious consideration to increasing the range of targets we can hit,” he told the paper.

Nearly three months after a revolt began against Gaddafi’s four-decade rule, fighting between rebels and government forces on several fronts has come to a near-standstill.

That creates a dilemma for Western governments who are under pressure to deliver a decisive outcome. They face voters who are impatient for quick results and want to avoid a repeat of the long-drawn out conflicts in Iraq and Afghanistan.

An inconclusive outcome is likely to limit Libyan oil exports, keeping world prices high, and also keep driving hundreds of migrants to make the hazardous journey across the Mediterranean to Europe.

Previous Nato bombing campaigns, especially in Kosovo in the late 1990s, showed that more aggressive targeting carries with it the risk of civilian casualties.

Funeral for imams
Libya on Saturday held a funeral for nine imams, or Muslim clerics, it said Nato killed in an air strike on the eastern city of Brega a day earlier.

A crowd of about 500 people gathered at a burial for seven of the nine at a cemetery near Tripoli’s port. Some shouted “May God defeat their [Nato] forces on land, sea and air!”

Mourners hoisted the plain wooden coffins above their heads to carry them into the cemetery. Inside the open caskets were what looked like bodies wrapped in green shrouds and garlanded with flowers.

The alliance said the building it struck in Brega was a command-and-control-centre.

“We are aware of allegations of civilian casualties in connection to this strike and although we cannot independently confirm the validity of the claim, we regret any loss of life by innocent civilians when they occur,” Nato said in a statement.

Thousands of people have been killed in the conflict, the bloodiest of the revolts which have convulsed the Middle East in what has been described as the “Arab spring”.

Libyan officials deny killing civilians, saying instead they were forced to take action against criminal armed gangs and al-Qaeda militants. They say the Nato campaign is an act of colonial aggression aimed at grabbing Libya’s oil.

Tunisia’s state news agency reported that a boat arrived at the south-eastern port of Zarzis carrying three officers who had defected from Gaddafi’s security forces.

It did not give their rank, but said they joined several other Libyan officers who had arrived in Tunisia by boat in the past few days, suggesting that there were divisions inside the ranks of Gaddafi’s security forces.

However, in Tripoli — where foreign reporters operate under restrictions on their movement — the outward signs were that Gaddafi’s administration was holding firm.

Libyan state television broadcast audio remarks by Gaddafi on Friday apparently aimed at quashing speculation about his health sparked by Italy’s foreign minister who said he had likely been wounded in a Nato strike and left Tripoli.

Security officials in North Africa and elsewhere say one of the risks from a lingering conflict in Libya is that al-Qaeda’s North African branch could exploit the chaos to acquire weapons and recruit followers.

Tunisian television reported on Sunday that security forces there had arrested two suspected al-Qaeda members near the border with Libya. It said they were carrying an explosive belt and several bombs. – Reuters