Warne bows out of cricket on a low 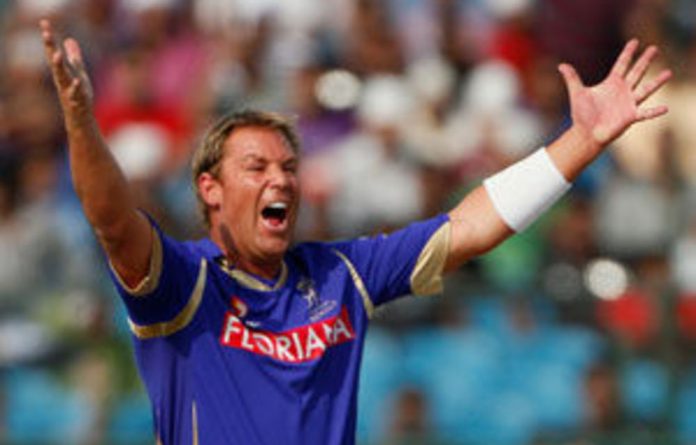 Shane Warne bows out of professional cricket on Friday after a frustrating final Indian Premier League (IPL) season replete with rows, fines and other off-field distractions.

The Australian legend announced earlier this month that he would retire as a player after the tournament, making Friday’s clash between his Rajasthan Royals and the Mumbai Indians the last performance of an extraordinary 15-year career.

“I’ve had a great time — but it’s time to say goodbye to IPL,” the Aussie superstar wrote on Twitter on May 6, announcing the end of his association with the tournament that offered the last chance to watch him in action.

The 41-year-old, widely regarded as one of the best bowlers of all time, retired from international cricket in 2007 after resurrecting the art of leg-spin and becoming the first player to take 700 Test wickets.

Friday’s game will be the last for the Rajasthan Royals after a poor run that has seen them fail to qualify for the play-offs despite starting as one of the favourites.

After scripting a title triumph with a rag-tag team in the first edition of the Twenty20 IPL competition in 2008, Warne’s final season in charge of Rajasthan did not offer the fairy-tale end he would have wished for.

He started well on the pitch, initially managing to fox batsmen with his turn and flight, but gradually lost his rhythm as even inexperienced youngsters began hitting him for sixes with ease and regularity.

His returns from the tournament have been unimpressive — 12 wickets from as many games while giving away 267 runs for an average of 22,25.

He had an ugly spat with a local cricket administrator, a tiff with Indian superstar Sachin Tendulkar, and has appeared dejected in recent matches after criticising the pitch used at home games.

On Wednesday, Warne was fined $50 000 for his part in a row with the secretary of the Rajasthan Cricket Association, whom he berated in front of the television cameras over the choice of wicket at home for the team.

Rajasthan’s last game against Kochi saw Warne’s men capitulate for just 97 and Warne did not even bother to bowl, uncharacteristically for a sportsman who prides himself on his fiercely competitive instincts.

He could be forgiven for wanting a hasty end to his Indian adventure to start life in retirement, which is expected to include more sports commentating for television, commercial work, charity, and possibly coaching.

As well as the fine and argument with his local cricket association, Warne appeared to cross Tendulkar, revered by many on the subcontinent, after the record-breaking batsman complained about the Rajasthan wicket.

“Certain sections of the media please stop trying to create a stir between Sachin and I — not on,” he tweeted afterwards. “If Sachin and I had a problem with each other we would call and sort it out — that’s what friends do.”

As has often been the case with Warne, his very public love-life has also kept the local press busy.

The flamboyant bleach-blonde player, forced to deny rumours he had a facelift ahead of the IPL, was frequently pictured canoodling with British model and actress Elizabeth Hurley, who was on hand to watch a number of Rajasthan games.

Inauspicious start
Despite the fizzle at the end of a record-breaking career, he will ultimately be remembered as one of Australia’s best cricketers — in the eyes of many second only to legendary batsman Don Bradman.

On his Test debut in 1992 he posted inauspicious figures of 1-150 but he then knuckled down under his mentor, Terry Jenner, and 18 months later caught the cricketing world’s attention with the “ball of the century” against England.

The delivery, Warne’s first in an Ashes Test, turned prodigiously to bamboozle England’s Mike Gatting and herald the arrival of a cricketing superstar.

Rob Steen, a sportswriter and senior lecturer at the University of Brighton, was brutal in his assessment of the star spinner in a column posted on the cricinfo website.

“To some he’s been the messiah of spin, a rebel with a hell of a cause, the greatest Australian contribution to global culture since the Bee Gees, the personification of competitive artistry,” wrote Steen.

“Others, especially older Australians, see a larrikin, a beach bum, a source of embarrassment and even disgust, the very embodiment of insufferable cockiness.” — Sapa-AFP