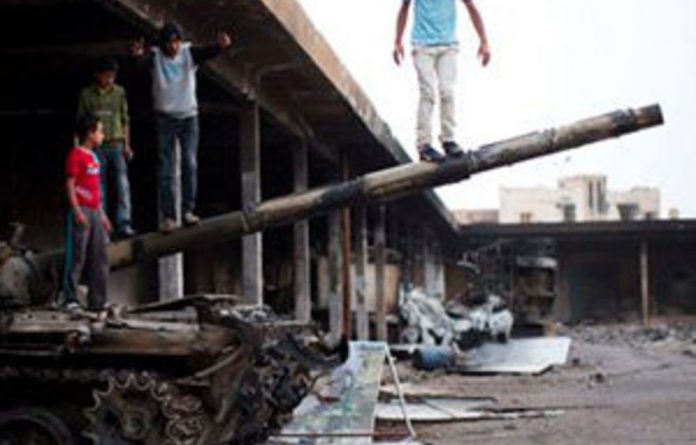 In a workshop in Tripoli’s east, a young mechanic named Ahmed hides three cans of paint and a box of balloons that he uses as weapons of revolution.

After three months, he can now paint the flag of Libya’s ousted monarch on balloons and pieces of cloth within a couple of minutes. But he doesn’t dare keep stores of the finished product.

The half-green, half-red flag, with a white crescent moon, has been adopted by rebels in the east and is reviled in areas still loyal to Muammar Gaddafi. The frequent police sweeps in Ahmed’s neighbourhood of Tajura on the outskirts of the capital make stocking rebel material far too risky.

“If I was caught, I would disappear,” Ahmed says. “Many others who have dared to defy them have been arrested since 17 February.”

Elsewhere in Tripoli, other dissidents have the same fears. “I don’t like Gaddafi, nobody does,” said a shopkeeper in the suburb of Souk al-Juma. “But things are not the same here as in the east. This is where he is powerful. They were never loyal to him in Benghazi.”

In Souk al-Juma, dissidents have taken unusual measures to spread the uprising — trapping pigeons that they colour with the rebel flag and strapping the painted balloons to cats. “But the cats were getting shot every-time the soldiers saw them,” said a Souk al-Juma resident who asked to be called Mahmoud. “So that project was stopped.”

Also brought to a halt — for now at least — have been rebel ambitions to march all the way west from Benghazi to the capital. More than three months into the revolution, the holy grail of the anti-Gaddafi forces seems to remain well out of reach. Those who don’t like Gaddafi are too afraid to show their colours, except by painting pigeons and tying balloons to cats — acts that hardly pose threats to a well dug-in regime.

“It didn’t start off this way,” said Mahmoud. “On 17 February when we heard about the uprising in the east and then the killings, we marched on Green Square [the heartland of central Tripoli] and we occupied it. I personally ripped down a large poster of Gaddafi. They were very important days.”

Last week, as Mahmoud recounted the early moments of the revolution, he acknowledged things had not gone so well since. We met him at the back of a house in a known rebel neighbourhood. There were none of the ubiquitous green flags that epitomise the 42-year-old Gaddafi regime. But nor were there markings to suggest this part of town was fighting the Libyan overlord. Mahmoud pointed out the neighbouring homes and vouched for each of their loyalties to the pro-democracy movement. There was not a person — nor a painted-up pet — on the street.

Dirty family secret
As in the rest of town, any resistance seems timid and passive. Tripoli, as the faltering Arab Spring gives way to the blow torch of high summer, still has a pressure valve fixed tight over it. Opposition to Gaddafi is treated like a dirty family secret — passed on in snatched conversations in the maze of marketplaces or alleyways in the old city.

On the city limits where revolution is thought to be brewing, it is difficult to catch anyone’s eye. Rebels in the east and their supporters in Cairo say these areas are battlegrounds, with nightly clashes between loyalist forces and anti-government gunmen. It is impossible to corroborate such accounts. No one the Guardian spoke to in the reported trouble spots of Souk al-Juma, Tajura, or Fashlum could, or would, confirm them.

There are regular bursts of gunfire in Tripoli — some celebratory, some at funeral processions, and yet more to quell tempers at long queues for fuel. Then there are what seem like exchanges of fire, which seem likely to remain unexplained.

But there is clearly no organised access to weapons here; and no sign that elements of the army are about to swap sides. Both factors gave rebels in the east a tremendous boost on the early days — defecting soldiers opened the doors to armouries and by February 22 every weapons depot east of Ajdabiya had been commandeered by anti-government elements.

In Tripoli, the armouries that have survived Nato bombings are still in government hands and there are reports of open resupply lines from Chad and Niger on Libya’s southern border.

“And anyone who can demonstrate that they are loyal to the leader can get one weapon for their family,” said Gaddafi supporter Samir, whose brothers had been issued with a Kalashnikov each at an army barracks in Tripoli.

It is hard to gauge how many others have taken up the government offer. However, Gaddafi retains solid support in the city he has used as his power base since 1969. For every dissident in the shadows, there appear to be more people willing to defend the status quo.

“Look around Tripoli and you will see a city that works,” said a policeman waiting at a bread queue in Tajura. “Everything is fine here — the people get what they need when we are not being bombed by foreign jets.”

Apart from fuel supplies, the city is still functioning. Building projects jut from the verges of European-standard roads and civic services all appear to be working well. Tripoli is not Baghdad in March 2003. It is more like the flourishing Iraqi Kurdish enclave of Erbil eight years later. On the eastern approach to the capital, soldiers casually man checkpoints that guard the city limits. They clearly felt little imminent threat when we passed them on Friday. On Saturday morning, a taxi driver who had lost a brother fighting loyalist forces in Benghazi told the Guardian he would rise up against Gaddafi — but only if others would first.

“Of course I would, it is our duty, but not now,” he said as he spent his third day waiting in a queue for fuel. “For now I just need petrol so I can work.”

Tripoli’s dissidents are in a city under siege — but not embroiled in revolution. – guardian.co.uk