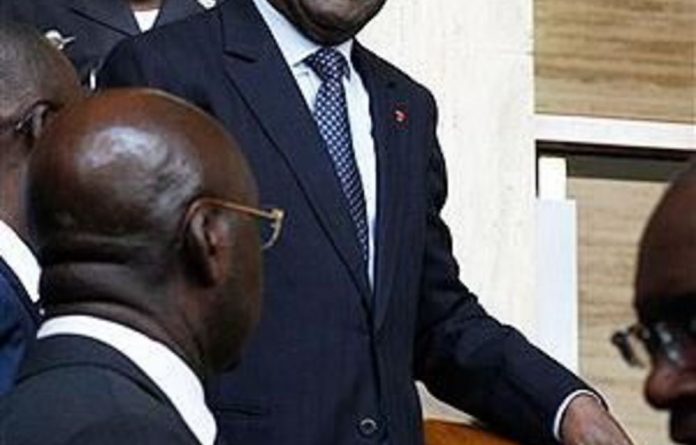 Reprisal attacks are still being committed by forces loyal to the president of Côte d’Ivoire, six weeks after he came to power vowing peace and reconciliation, Amnesty International warned on Wednesday.

Alassane Ouattara, championed by the west during a deadly post-election conflict, has failed to condemn atrocities against real or perceived supporters of ousted president Laurent Gbagbo, the human rights group said.

Amnesty also criticised the UN mission in Côte d’Ivoire for ignoring pleas for help and failing to prevent a massacre in the western town of Duekoue.

Its report argues that forces allied to both Gbagbo and Ouattara committed war crimes and crimes against humanity during six months of violence following November’s disputed vote.

Gbagbo, who refused to accept defeat, was finally winkled out of his presidential bunker on April 11 by pro-Ouattara rebels with French military backing. Ouattara — whose inauguration last weekend was attended by 20 other national leaders and UN Secretary General Ban Ki-moon — has pledged to heal the bitter divisions.

But Amnesty reports that a manhunt was launched against Gbagbo loyalists in Abidjan and several senior officials close to him were beaten in the hours after his arrest.

In the west of the country, thousands of people fled their homes and many are still living in the forest, too frightened to return.

Gaetan Mootoo, Amnesty’s West Africa researcher, said: “Human rights violations are still being committed against real or perceived supporters of Laurent Gbagbo. Alassane Ouattara’s failure to condemn these acts could be seen as a green light by many of his security forces, and other armed elements fighting with them, to continue.

“Ouattara must publicly state that all violence against the civilian population must stop immediately.”

Attacks against villages inhabited by people belonging to ethnic groups considered supporters of Gbagbo continued in the first weeks of May, Amnesty said.

Systematic series of killings
Between May 6 and 8 several villages were burned and dozens killed. Ouattara’s republican forces justified these acts by saying they were looking for arms and Liberian mercenaries.

An Amnesty delegation spent two months in Côte d’Ivoire, gathering more than 100 witness statements from people who survived the massacre in Duekoue and neighbouring villages on 29 March.

All the statements indicated a systematic and targeted series of killings committed by uniformed republican forces, who executed hundreds of men on political and ethnic grounds.

Before killing them, they asked their victims to give their names or show identity cards, Amnesty said. Some of these cards were found beside the bodies.

A woman who lived in Duekoue told researchers: “They came into the yards and chased the women. Then they told the men to line up and asked them to state their first and second names and show their identity cards. Then they executed them. I was present while they sorted out the men. Three young men, one of whom was about 15, were shot dead in front of me.”

Amnesty’s report also accuses the UN mission, which has a base less than a 2km from Duekoue, of fatal inertia.

Victims claimed they had repeatedly requested help from Unoci (the UN Operation in Côte d’Ivoire) but received no response from its 200 soldiers.

Mootoo said: “Unoci has a mandate to protect the civilian population yet in some cases it clearly failed to do this.

“Unoci officials told us that it is the duty of the state to protect civilians. However, as the national forces firstly under Gbagbo and then under Ouattara themselves committed horrific crimes, how can we expect them to protect the civilian population?”

In response on Tuesday, Hamadoun Touré — a Unoci spokesperson — said: “We will issue our own report on the Duekoue events within the coming days.”

At least 3 000 people died and more than a million were displaced in the Ivorian crisis, in which cocoa exports ceased, banks closed and shops were ransacked. – guardian.co.uk

The continent has long received more than its fair share of the world’s toxic waste, endangering the health of people who are exposed to it
Read more
Advertising