Business as usual for the ANC 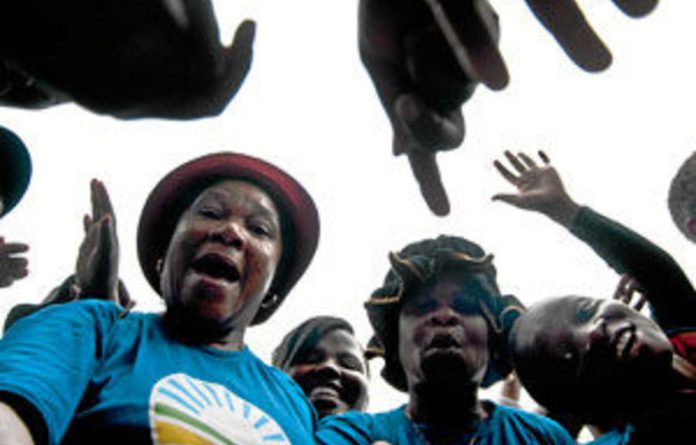 Many analysts and news reporters, both at the SABC and in the private media, have emphasised how the 2011 municipal elections were “business as usual”, with the ANC emerging yet again as the dominant force and other parties trailing behind. This discourse serves to obfuscate significant democratic discontinuities.

To their credit, some media outlets did report on the differences, the most significant being the Democratic Alliance’s radical break with its “fight back” posture dating from the late 1990s until recently.

DA leader Helen Zille relentlessly drove a positive election campaign, starting with the poster projecting her, Lindiwe Mazibuko and Patricia de Lille as the public faces of the DA leadership. Zille has clearly learned from the mistake made with her all-male cabinet. This is the first time in South African politics that a party has depicted three women in such a capacity and, I dare say, it remains a leap too far for the patriarchal majority in the ANC to make.

The DA launched its campaign in Kliptown, Soweto, a powerful symbol of nonracialism because of the anti-apartheid activists of all races who gathered there in 1955 to adopt the Freedom Charter. Zille rolled out her conversational isiXhosa ­wherever she could and learned to dance as a “white madam” never would at least in public, that is.

The DA campaign emphasised delivery and non-racialism, encapsulated in the slogan: “The DA delivers for all”.

What analysts and reporters have mostly ignored, however, is that the ANC, in the face of dwindling internal political resources, collapsed into its own version of the “fight back” mode in the run-up to the election. Instead of angry white men, we had angry black men.

In opposing the DA message while fitting in with the most readily available discourse emanating from the ruling party, Ehrenreich set himself not just against the DA but also against certain Cape Town communities with his oft-repeated assertion that he “would not be mayor for all”.

He went as far as to equate the residents of wealthy Constantia with “drug lords”, saying he would be neither of these groups’ mayor. One is unsure whether he was alluding to the truism that white people pillaged black people’s land, which Malema rolled out at the time.

Finding a way forward
Such a statement may be historically true but, by itself, does not offer a way forward for an inclusive democracy in which inequities are actively remedied. Ehrenreich’s suggestion that new buses should be rerouted away from predominantly white areas struck one as counterproductive.

He also threatened to build low-cost housing in wealthy, predominantly white areas. This is possibly a desirable option but he could not answer basic questions about the utilisation of still-vacant land in District Six.

It has been repeatedly suggested that Zille’s moves are mere opportunism, the “white madam” seeking to use poor black people as voting fodder. That the DA needs black voters to become a notable electoral force goes without saying. But, ­moving beyond an obvious point that is classist and racist and closes down possibilities, one could better analyse Zille’s discourse as a countermove enabled by Malema’s discourse of racialism. Zille has dared to bring the words “reconciliation” and ­”rainbow nation” back into public political talk.

We should remember when this discourse lost traction in post-apartheid South Africa. A significant factor was the combination of Tony Leon and Thabo Mbeki, at racial ­loggerheads with each other a decade ago as the leaders of the most prominent parties, the DA and the ANC. South Africa could not have produced, at that sensitive time, a permutation more detrimental to democracy. The divisive reverberations have since escalated to ever more destructive levels.

Crucially, Zille’s new catchphrase has been “reconciliation, redress, delivery and diversity”. Also, claiming a share in non-racial symbols such as Kliptown and “father of the nation” Nelson Mandela is a move towards an inclusive South Africaness. These radical shifts in an influential political force should not be pooh-poohed but encouraged.

Which is what some black voters seem to have done in last week’s election: from Nelson Mandela Bay, Mbombela and Tshwane to Ekurhuleni, Emakhazeni, Buffalo City and Mokopane, increasing the DA’s black vote fivefold.

Meanwhile, coloured voters in especially Cape Town resoundingly rejected the ANC’s divisive rhetoric, as judged by the increase of 15% to a 65% voter turnout. Massive increases in opposition-voter turnout were also seen elsewhere. In all, 133 wards swung from the ANC to the DA.

Countrywide it is probable that, as in 2009, more eligible voters stayed away than voted ANC. Malema’s inflammatory discourse did not drive them to the ballot box. Perhaps South Africans are not haplessly tossed about by populists leeching off revamped apartheid identities.

What if black — including coloured — working-class and poor voters are not the mindless fodder that elites and analysts would like them to be, but rather are responsive to those discourses that most effectively ­resonate with their lived experiences, with both what they know and what they aspire to?

The election results could be read as voters talking back to the political elites, either by voting or staying away, saying: “We have had enough of the continued toiling in poverty and of apartheid-inspired rhetoric.”

Between now and the 2014 national election a window of opportunity presents itself to the major political parties: for the DA to add more substance to its rhetoric through real changes in the material living conditions of black people in the places it governs and for the ANC to challenge itself to save its thinly worn non-racial tendency.

Christi van der Westhuizen is a contributor to the book In the Balance: South Africans Debate Reconciliation (Jacana, 2010)