Zuma: Gaddafi to stay ‘despite the difficulties’ 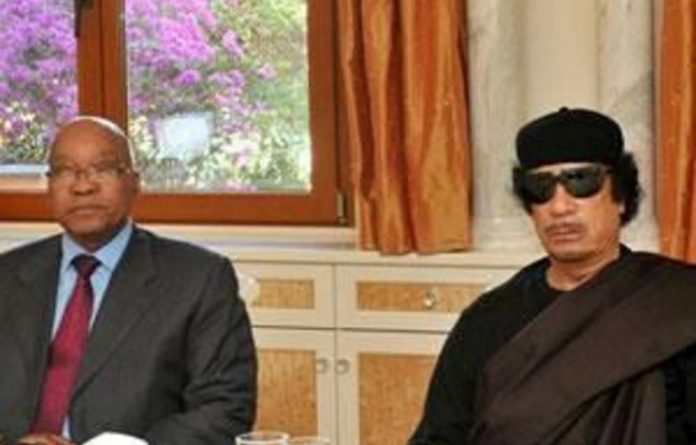 Muammar Gaddafi insists he will not leave his country, South African President Jacob Zuma said on Tuesday after he met the embattled Libyan ruler.

Gaddafi’s departure is the key demand of rebel forces battling his troops. On Tuesday, Italy’s foreign minister pledged to provide Libya’s rebels with fuel and hundreds of millions of dollars backed by frozen assets of Gaddafi’s regime. Franco Frattini spoke during a visit to the de facto rebel capital, Benghazi.

The hard lines of the two sides and the competing, high-level visits illustrated the virtual stalemate in the conflict. Nato aircraft bomb the Libyan capital night after night, and military forces from the two sides engage each other in battles, shelling and rocket attacks, little is changing on the ground.

South Africa is concerned for Gaddafi’s safety, according to the statement released by Zuma’s office on Tuesday, after he returned home from his talks with Gaddafi in Tripoli — a rare visit by a high-level world figure.

Zuma was pressing to revive an African Union proposal for a ceasefire and dialogue to settle the Libya conflict, and Gaddafi agreed, the statement said, “Colonel Gaddafi called for an end to the bombings to enable a Libyan dialogue,” it said. “He emphasised that he was not prepared to leave his country, despite the difficulties.”

Zuma called for a halt to Nato airstrikes as part of the ceasefire. After initially backing Nato’s involvement, Zuma and the African Union called for a cessation, charging that Nato had overstepped its UN mandate to protect civilians.

Nato aircraft blasted five tank transporters near the western coastal town of Zlitan on Monday, British military spokesperson Major General John Lorimer said in a statement. The town is between Tripoli and the rebel-held city of Misrata.

Through the statement, the African Union appealed for recognition of its role in finding a formula, adding, “Nothing other than a dialogue among all parties in Libya can bring about a lasting solution.” The African body’s image has deteriorated in recent years because of its inability to resolve conflicts on the continent.

Rebel leaders immediately turned down the African initiative because of Gaddafi’s refusal to relinquish power.

The statement said Zuma had lengthy talks with Gaddafi. South African foreign affairs spokesperson Clayson Monyela said he raised issues brought up in his talks with rebel leaders in Johannesburg. Monyela did not say when the meetings took place or what the issues were.

Defections
Defections from the Gaddafi regime appear to be speeding up. Thirteen servicemen loyal to Gaddafi, including a colonel and four commanders, have fled to neighbouring Tunisia, the official Tunisian news agency said. It was the second group of military men to defect to Tunisia this week.

The latest group arrived on Sunday in the port of Ketf in southern Tunisia, the news agency TAP said on Tuesday.

On Friday, a group of 22, including a colonel and ranking officers, arrived in two boats at the same port from the rebel-held Libyan city of Misrata.

On Monday, eight top Libyan army officers, five of them generals, made an appeal in Rome to fellow officers to join the revolt.

At the United Nations, political chief B Lynn Pascoe told the Security Council that although their positions remain far apart, government authorities in Tripoli and opposition representatives in Benghazi have reiterated their commitment to work through UN special envoy Abdelilah Al-Khatib. Pascoe said Al-Khatib, who will return to Tripoli this week, has been trying to narrow the differences between the two sides to get indirect talks under way.

In Beijing, China added its voice to calls for a political solution, Foreign Ministry spokesperson Jiang Yu said, “We hope all sides can put the interests of the Libyan nation and its people first and take into full account the mediation plans put forward by the international community so as to ease tensions as soon as possible.”

Effects of more than three months of fighting are being felt all over. Shortages plague the western part of the country under Gaddafi’s control, where kilometres-long lines wait at petrol stations, and basic supplies, even some food items, can be hard to find.

On the rebel side where most of Libya’s oil fields are located, oil exports have been halted after fighting and shelling around the wells, plunging the National Transitional Council into a financial crisis.

Frattini offered to correct that. He said Italy would provide “for the needs of the Libyan people with a huge quantity of fuel and huge amount of money”.

He did not provide an exact figure but said the assistance would amount to “hundreds of millions of euros that are necessary for the daily life of the population”.

“The Libyan nation is not a poor nation, it has its resources. But during this difficult period of time, the financial needs are extreme, and the Italian government has come in to give us the necessary financial support for our development,” said Ali al-Essawy, a senior rebel official.

Italy, the former colonial power in Libya, was the third country, after France and Qatar, to give diplomatic recognition to the rebel council. Rome has also dispatched military advisers to help train the rebel military and sent doctors to help organise hospitals and medical efforts.

Frattini vowed Italy would continue such support and repeated his demand that Gaddafi step down.

Just over a year ago, veteran radio presenter Xolani Gwala’s cancer was in remission. He spoke to the Mail & Guardian once he was back on air.
Read more
Advertising
Continue to the category
Coronavirus