Michelle Obama drops in on Madiba 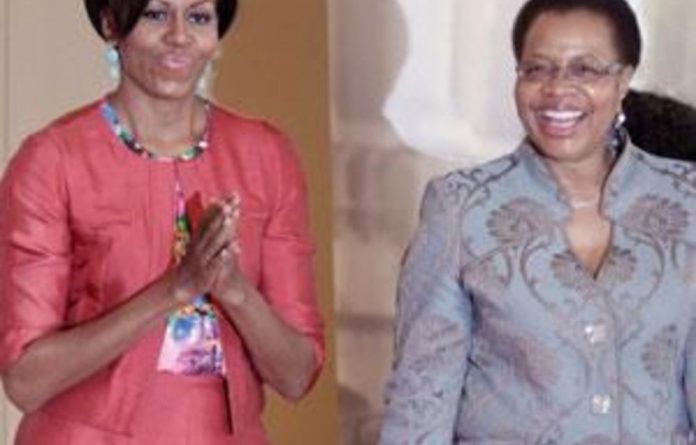 The meeting with the Nobel Peace Prize winner was discreetly arranged after Obama and her daughters visited archives chronicling some of his 27 years as a political prisoner.

Michelle Obama has become a style icon since her husband took office. Whether you’re a fellow First lady or a female head-of-state, getting up close and personal with her is bound to leave you somewhat intimidated. We take a look at some of these moments.

At the Mandela Foundation, his wife, Graça Machel, guided Obama, her mother, and her daughters, Malia and Sasha, through an exhibit of his personal photographs and journals, in which he meticulously drafted letters but also kept more mundane notes on his weight and daily routine.

“After leaving here, she proceeded to make a brief courtesy call on former president Mandela,” said Achmat Dangor, the head of the foundation, calling the first lady “a lovely woman without any airs”.

Political cause
President Barack Obama has called the anti-apartheid struggle his first political cause, and US officials say he has had periodic telephone contact with Mandela, who led the struggle against white-minority rule.

The two men met in 2006 when then-senator Obama toured Africa. A simple cellphone picture of that meeting is now in Mandela’s office, aides to the first lady said.

Mandela welcomed her entire family into his home, including a niece and nephew travelling with them.

Such visits are increasingly rare. Mandela, who turns 93 next month, has received few guests since he was hospitalised with an acute respiratory infection in January.

Mandela’s legacy in the battle for South African democracy defines much of Obama’s visit. After leaving his home in the leafy Houghton neighbourhood, they travelled to the Apartheid Museum, which chronicles the rise and fall of white rule.

She was set on Wednesday to visit the memorial for Hector Pieterson.

On Thursday she planned to see Mandela’s former prison at Robben Island and meet Nobel Peace Prize laureate Desmond Tutu in Cape Town, before heading to neighbouring Botswana for a safari on Saturday.

On Wednesday Obama will also give the keynote address at a conference of the Young African Women Leaders Forum, a two-day meeting of young women who are playing leadership roles across the continent.

‘Undivided at6tention’
Earlier Tuesday, Obama met briefly with one of President Jacob Zuma’s three wives, Nompumelelo Ntuli-Zuma, and a group of about 100 invitees in Pretoria.

Zimbabwean media magnate Trevor Ncube, who was at the event, said on the micro-blog site Twitter that Obama had taken the time to meet each of the guests personally.

“She took time to talk to all one-on-one. Awesome!!” said the publisher, who owns some of the region’s top newspapers.

South African actress and TV hostess Precious Kofi, who was also at the event, Tweeted that Obama was “warm, sincere and just lovely”.

“From kings to ministers and then myself, Mrs Obama gave each individual her undivided attention,” she said.

US officials are describing the trip as her first major solo overseas trip as first lady.

The visit is her second official trip to sub-Saharan Africa, after a 24-hour stop in Ghana with her husband in 2009.

Obama made her first solo trip as first lady last year, stopping briefly in Haiti before continuing on to Mexico for a three-day visit. — AFP

For the latest news on Michelle Obama click here: