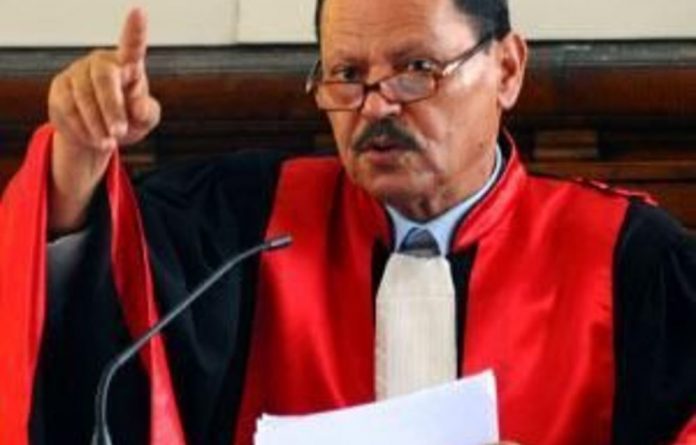 Tunisian authorities were under fire on Tuesday for their high-speed sentencing in absentia of toppled president Zine al-Abidine Ben Ali and his wife to 35 years in prison for misappropriating public funds.

The court’s quick verdict on Monday after only six hours of deliberation on the first day of the landmark trial was dismissed as a “charade” by some Tunisians and as a “joke” by a Ben Ali lawyer.

“It is a big disappointment, the kind of charade of summary justice that the dictatorship had accustomed us to,” said Mouhieddine Cherbib of a France-based Tunisian rights group on Tuesday.

“We wanted a real trial, a fair one … a trial of the dictatorship with people who were tortured appearing as witnesses — a justice system from which you learn something,” Cherbib said.

Ben Ali and his wife, Leila Trabelsi, had been charged with embezzlement after the discovery of money and jewellery in their palace in the outskirts of Tunis.

Judge Touhami Hafi said the sentences, which exceeded the 20 years that had been widely predicted, would take immediate effect despite the couple now living in Saudi Arabia, which has so far ignored Tunisia’s demands to extradite Ben Ali.

A second case targeting Ben Ali only, involving weapons and drugs allegedly found in a presidential residence in Carthage, was postponed to June 30 to allow his lawyers more time to prepare his defence.

“This is a joke,” attorney Akram Azoury said. “You don’t retaliate to a joke. You just laugh.”

The former president denies any wrongdoing and in a statement released on Monday said he had not intended to go into exile while condemning political developments in Tunisia since the end of his 23-year rule.

“I did not abandon my post as president nor did I flee Tunisia, as some media have falsely reported … I was duped into leaving Tunis,” read a statement earlier released by Azoury.

The trial was only the start of a long process that may see top members of Ben Ali’s regime in the dock over allegations including murder, torture, money laundering and trafficking of archaeological artefacts.

Of the 93 charges Ben Ali and his inner circle face, 35 will be referred to the military court, according to the justice ministry spokesperson.

A murder or torture conviction carries the death penalty, though Ben Ali is not expected to face these charges.

Monday’s trial and conviction was also seen as an effort by the transitional government set up after Ben Ali’s departure to show discontented Tunisians that they are accomplishing something.

“This trial is a pretext, a charade to show that they are taking action,” said Beatrice Hibou, a senior researcher at the CERI international studies institute in Paris’s political studies school, Sciences Po.

“It reflects the current tension in Tunisia. Tunisia is seeing a power struggle between the social movement and the old system that wants to continue, after getting rid of the worse forms of plundering and repression,” she added, noting that many of the old regime are still in the administration and justice system .

Ben Ali — accompanied by his wife and two children — left Tunisia for Saudi Arabia in January at the climax of the first of the Arab uprisings.

Dramatic departure
In Monday’s statement, Ben Ali for the first time gave his account of his departure from Tunisia on January 14, saying he had been advised by his security chief, Ali Al-Soryati, to leave the country because of fears of assassination.

He said he had bundled his family on to a plane which took them to Saudi Arabia and had explicitly instructed the pilot to wait for him at Jeddah airport.

“But after arriving in Jeddah the plane turned around and headed back to Tunis, disobeying my instructions,” he said.

Ben Ali said he considered himself the victim of a plot that needs him as the “absolute evil” so that Tunisians “are prepared for a new political system created behind their backs by extremists”.

His dramatic departure came less than a month after the self-immolation of Mohamed Bouazizi, a 26-year-old street vendor whose protest over unemployment unleashed already simmering popular anger against Ben Ali.

Saudi Foreign Minister Saud al-Faisal has said the kingdom gave refuge to Ben Ali on condition he would not use it as a base for political activities. — AFP

Amid reports of brutal, indiscriminate slaughter, civilians bear the brunt as villages are abandoned and the number of refugees nears half a million
Read more
Business