Cele ‘fingerprints’ all over KZN lease 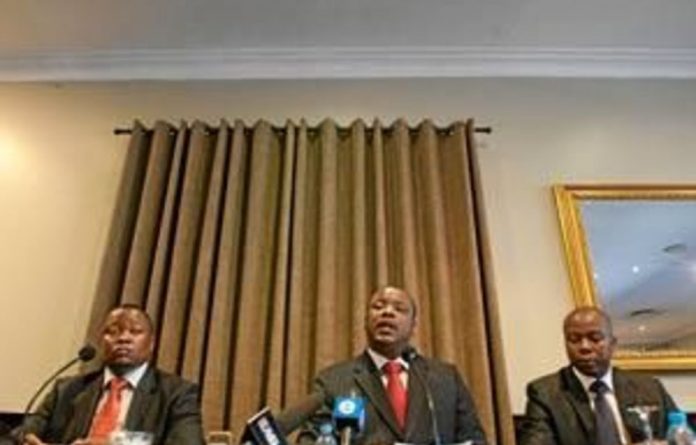 Police Commissioner Bheki Cele’s “fingerprints” can now be found on two police lease deals, both favouring property vendor Roux Shabangu, both inflated and which together would have cost the police R1.6-billion.

This is according to Public Protector Thuli Madonsela’s explosive provisional report on how the department of public works awarded Shabangu leases to house the South African Police Service (SAPS) in the Sanlam-Middestad building in Pretoria and Transnet Towers in Durban.

The 10-year leases were valued at R500-million and R1.1-billion respectively.

Madonsela released her first report on the Pretoria lease in February this year. In this, her second report, she made damning findings against Cele, Public Works Minister Gwen Mahlangu-Nkabinde and officials in their departments and gave those implicated until yesterday to respond before her report is concluded.

Last week, however, the Sunday Times reported on a leaked version of the document.

It prompted Madonsela’s ire as well as a quick U-turn from Mahlangu-Nkabinde, who said on Monday she would go to court to get the Pretoria deal cancelled.

Previously, the minister had pushed ahead with the Pretoria lease against two senior legal opinions and Madonsela’s preliminary findings. The Durban lease lapsed in March after Shabangu was unable to secure funding to take transfer of the building.

A startling feature of the public protector’s report is a list of irregularities common to both deals, starting with discussions between the police and Shabangu. For example:

In her findings, Madonsela said Cele’s conduct was “improper, unlawful and amounted to maladministration”.

As regards Mahlangu-Nkabinde, she found the minister had “failed to meet the requisite of statesmanship expected from her”.

Cele rolled up his sleeves and got to work when, late in 2009, word came from the department of public works to say the KwaZulu-Natal head office lease at Durban’s Servamus building would expire in August 2010.

As the police’s accounting officer, Cele was ultimately responsible, but he had cemented his role with a September 2009 order that he would personally approve all procurement above R500 000. Decisions on big deals would not be delegated.

In November, Cele instructed his supply-chain management division to investigate the feasibility of constructing a new headquarters for KwaZulu-Natal.

By February, newly appointed provincial commissioner Monnye Ngobeni had taken the baton from Cele and confirmed that constructing a new building was the best option. The divisional commissioner of supply-chain management was asked to get the process moving.

They should renew the Servamus lease for two years while building went ahead, Ngobeni recommended.

The public works department’s regional office was informed of this on March 8 and later that month Ngobeni again indicated that construction of a new building “was preferred to leased accommodation”.

But on March 19, Shabangu signed a deed of sale on the Transnet Towers and Ngobeni’s opinion rapidly changed.

It appears she had been passed a new baton.

The police’s provincial head of property, Thembinkosi Ngema, told the public protector that in March Ngobeni called him and other police officials to join her on a site visit of the Transnet building.

“Representatives of [Shabangu’s company Roux Property Fund (RPF)] were present at this meeting, where the suitability of the building for the requirements of the SAPS was discussed. [Public works] was not represented at this meeting.”

Ngema was not happy about meeting the landlord without the presence of public works officials and he said he told Ngobeni this.

Like Ngema, Nel was not happy. “[The department] has no knowledge of such need, nor has this office received any planning instruction via either head office — I am perturbed at the developments as illustrated in your letter.”

Both officials put their concerns in writing, predicting the scrutiny and media storm that would inevitably follow the fudging of such a big deal.

“I would like to advise the management to refrain from engaging with the prospective landlords — as this will jeopardise the tender processes,” Ngema wrote, warning of “bad publicity and unnecessary media attention”.

In a widely distributed email, Nel stated: “Negotiated procedure should not be entertained. It is with grave concern that it is noted that the Transnet Building has been identified as possible alternative accommodation.”

Greasy fingerprints of the law

The national commissioner ignored such concerns. Rather, the Transnet lease was removed from Ngema’s area of responsibility and Cele called a meeting to discuss Nel with new public works director general Siviwe Dongwana.

Cele was “extremely upset and questioned how a low-level official in the department of public works could challenge his authority”, SAPS supply-chain management head Hamilton Hlela told Madonsela.

The protector reported: “According to Mr Dongwana — [Cele] regarded Ms Nel’s enquiries as meddling in the affairs of the SAPS and further stated that she was running his department for him.”

Hlela said “that he too was unwilling to question the decisions and instructions of [Cele] due to the culture of the SAPS not to question instructions”, Madonsela wrote.

Nel was then moved from her post and Cele went on to sign an initial and resubmitted needs assessment. Remarkably, it was altered to nearly match the floor space offered by Shabangu.

A letter was sent to the department of public works director general’s office, informing that “[Cele] has identified the Transnet building in Smith Street to be leased as alternative accommodation for the provincial commissioner of KZN,” and asking that public works move the process forward urgently.

After SAPS finance chief Stefan Schutte questioned the need and told the supply-chain management division that there was no budget for the lease, Cele himself authorised funding to be made available.

He later admitted he did not know where exactly the funding would be diverted from. The next day, Schutte noted: “As [Cele] approved the lease already, funds would have to be found and made available, with opportunity costs, meaning that something else would have to be forgone [reprioritised].”

In other words, the money would have to be drawn from the police’s operating budget.

In his response to the public protector, Cele argued that Ngobeni was responsible for determining her office’s needs.

In the resubmitted needs assessment signed by Cele, the police had decided to centralise the service’s Family Violence, Child Protection and Sexual Offences (FCS) Unit.

This move bumped the police’s building-space requirement from 29 747m2 to 41 431m2, close to the 45 499m2 offered by Shabangu, which was later inexplicably and precisely matched by public works’ assessment of the police’s needs.

Cele argued that the centralisation of the FCS unit was necessary, directly contradicting Police Minister Nathi Mthethwa, who said in May: “FCS structures will be aligned with the cluster policing model to serve the stations.”

The commissioner confirmed meeting Dongwana to discuss Nel, but “he denied that he insisted that the director general of the department of public works should take action against [her]”.

Shabangu did not respond to the Mail & Guardian‘s request for comment.

Madonsela’s spokeswoman Kgalalelo Masibi declined to comment. On Monday, however, public protector chief executive Themba Mthethwa said: “We are of the view that the [Sunday Times‘] decision to publish this leaked report was unethical. We call on all media practitioners to be patient until the final report is released.”