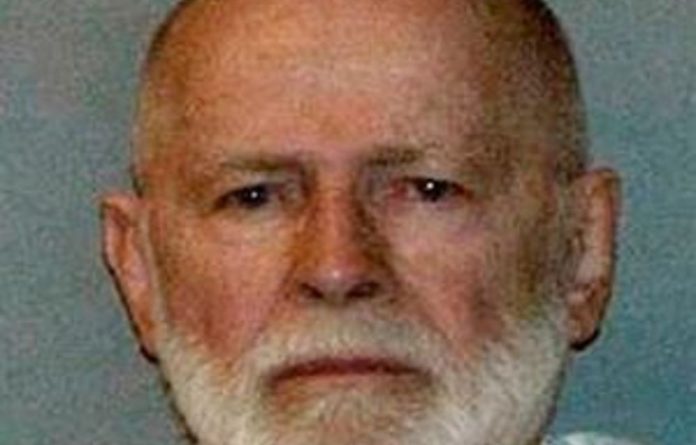 The caption under his FBI mugshot now reads: “Captured”. After a 16-year manhunt which stretched from Boston to London through Ireland, France, Italy, Thailand, Brazil and Spain, James “Whitey” Bulger, America’s most wanted homegrown fugitive has finally been apprehended.

Nicknamed “Whitey” for his receding silver white hair, Bulger has evaded the authorities in the US and Europe — as well as a string of private investigators — since his disappearance in 1995.

His flight from justice 16 years ago was all the more embarrassing for the FBI because Whitey, a former federal informant, had been tipped off by a corrupt agent that he was about to be arrested, charged with 19 murders, extortion, drug dealing and money laundering.

After years in which a string of purported sightings failed to produce any leads, the man whose life inspired Jack Nicholson’s character in Martin Scorsese’s film The Departed will at last appear in a US court.

On Monday the FBI launched a fresh appeal for information on the whereabouts of the former boss of Boston’s Irish mafia. In a change of tactic the agency targeted television adverts shown during programmes watched by mainly female viewers. The FBI — which doubled the reward for the arrest of Bulger to $2-million last year, the largest for a domestic target — focused on women in their sixties.

Bulger’s long-time girlfriend, Catherine Greig, was in that demographic, and the authorities appealed to women who may have seen her in beauty salons and dentist surgeries. A dental hygienist by trade, Greig had purportedly undergone multiple plastic surgeries, frequented beauty salons and — like Bulger — loved dogs.

The FBI bought 350 TV advertising time slots and ran a 30-second appeal, fronted by Boston-based agent Richard DesLauriers. “There is someone in the United States or elsewhere in the world who knows Catherine Greig as a neighbour, friend or co-worker,” the ad began.

Within 48 hours, the agent was proved right. How long the modern day Bonnie and Clyde have lived in Santa Monica is not known. But the details of Bulger’s life on the run could provide more embarrassment for the agency if it emerges he had been there for some time.

Deposit-box lifeline
The last sighting of Bulger was in London in 2002, during his travels through Europe, leaving money in deposit boxes to support his time as a fugitive. The sighting in London led to Scotland Yard’s involvement in the hunt and Met detectives discovered one of his many deposit boxes in the security vaults of a bank near Piccaddilly Circus.

Inside officers found $50 000 and the key to another deposit box in Dublin, where Bulger had connections with the dissident republican movement. It was these deposit boxes, private investigators told the Guardian, which allowed him to evade justice for so long.

Sightings four years ago in Spain and the Canary Islands led the US attorney in Boston to issue an international arrest warrant and a US justice department investigators visited Alicante only to find the trail had gone cold.

Last year the FBI was alerted by a member of the public who claimed to have seen Bulger leaving a San Diego cinema showing The Departed.

The sightings in California continued. This week the FBI said there had been “multiple leads” including one at a beauty salon in Fountain Valley.

As well as being accused of a string of gangland murders, Bulger is also believed to have been involved in another notorious unsolved crime, one of the biggest art heist’s in history.

Thirteen paintings including Rembrandt’s only seascape The Storm on the Sea of Galilee, a Vermeer, five Degas drawings and a Manet portrait were stolen from the Isabella Stewart Gardner Museum in Boston by thieves dressed as policemen on St Patrick’s Day in 1990.

Art crime investigators joined the hunt for Bulger amid the discovery of evidence that he was involved. With the crime boss now behind bars, sources said the paintings — which are believed to be hidden in Ireland — may finally resurface. – guardian.co.uk