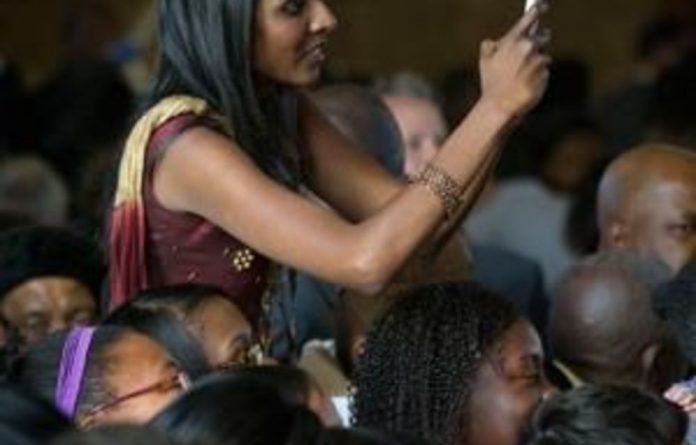 The knot in my tummy had tied and untied itself all afternoon.

It had started during Michelle Obama’s speech at Regina Mundi church in Soweto. Hers was a good dose of the sort of verbal command that swept her husband into power in the US — complete with a “Yes, we can” kicker at the end. Except this time, we weren’t watching it on screens from the other side of the world. This time the Obama magic was in front of us and, importantly, about us.

It was almost enough to make us forget the looming spectre of the chilling results of the ANC Youth League conference a week before in the same city. Almost.

But Obama’s inspiration-loaded call for young people to rise up and make the world a better place through good ol’ fashioned hard work stood in stark contrast to the real youth power brokers in our country — and failed to mention them entirely.

Indeed, the full two-day programme for us carefully picked 76 young African women leaders stayed far away from any controversial politic. Instead it was a further dose of democratic-flavoured inspiration, in keeping with the theme of Obama’s visit. And with 76 African women aged 16 to 30 in one room, it didn’t take much to get us hooked. We gorged on inspiration, showered in it, threw handfuls of the stuff into the air.

Still, my fellow delegates spoke about how their lives had been changed, how they now saw the world in an entirely different way. I half expected someone to rise and recite Maya Angelou’s clarion call to black women everywhere, Phenomenal Women.

But still, the knot tied and untied itself.

And then, in the midst of the inspiration love fest, I heard the news. Kader Asmal was dead. The spiral of local politics was continuing outside the Obama bubble, with its dozens of Secret Service men, coordinating US officials and carefully timed moments.

It was Eleanor Sisulu who put her finger on it. The award-winning author and academic was one of a handful of local leaders chosen by US officials to address us at our final dinner. She pushed away her plate of kebabs and cheese pastries, stood to her feet and said, almost uncertainly: “It’s been a strange few weeks for me.”

It was a far cry from the Oprah-esque discourse that had attended much of the programme. But I recognised a fellow knot-carrier. She spoke sombrely of the recent death of her mother-in-law and struggle heroine, the incredible Albertina Sisulu, the disturbing conference of the radical ANC Youth League that followed soon after with its game-changing political plays, and the news just a few hours before of Asmal’s death — another struggle hero and upright politician. It was a series of threads in the unravelling of our political integrity and it stood outside of the brief hiatus that Lady O with her fabulous outfits and amazing speech had brought with her.

Obama, beautiful in an aquamarine fitted dress, was of course flawless in her acknowledgement of SA’s history. She — or her speech writer — proved to know more than the average South Africans of our history, particularly the events of June 16 1976. And she read from her near-invisible teleprompters with the effortless aplomb that fooled many into thinking she had memorised the entire 30 minute speech.

She urged young South Africans and Africans not to wait for title or position before leading.

“See, my husband and I, we didn’t change any laws, we didn’t win any awards, get our pictures in the paper,” she said, speaking of her family, pre-world domination. “But we were making a difference in people’s lives.”

It was all about the little things.

“You may not find yourself leading passionate protests that fill stadiums and shut down city streets. And the change you seek may come slowly, little by little, measured not by sweeping changes in the law, but by daily improvements in people’s lives.”

The Malema elephant
Except that when I looked around the country, the youth wielding the most amount of power were the ones demanding the nationalisation of mines, the expropriation of land without compensation and the muzzling of independent media. And while Obama exhorted us to “be the generation that holds your leaders accountable for open, honest government at every level” it seemed a moot point if we didn’t once acknowledge the Malema elephant in the room; the same Julius Malema, the militant president of South Africa’s ruling party’s radical youth wing, who has just seven days before called for the arrest of Barack Obama for daring to interfere with Libya’s sovereignty.

Of course, it would have been completely undiplomatic for Obama to have said anything on the very real political catastrophes happening across Africa. This was the woo-tour; all glamour, hugs, and yes-you-cans. The higher level political engagements in favour of team America would take place in a different, more official space.

And, internal knots aside, it was hard to fault the Americans.

It was always going to be part political theatre, part inspiration. And as one of the select few chosen to interact with Obama, it was difficult to separate the two.

There was the farcical: hunched over in a dusty garden patch, a trowel in one hand and a clump of spinach waiting to be planted in the other. Oh and about a dozen flashing cameras and twice as many Secret Service men watching me. “Don’t dig yet … don’t DIG.” We were waiting for Obama to arrive, you see, so we could get a shot of her doing down to earth activities — quite literally — with us young women leaders.

It was hard not to be cynical in those moments — I would much rather have used the time to pick her brain about the dark times ahead for media freedom in the country and continent than chat about the vegetable patch at the White House. But then there were the sublime moments, too.

It was Operation US Democracy, and it was sold to us in the most glamorous way possible: chosen and publicly acknowledged by the first lady, and flattered by various US officials. And then there was the most enduring and exciting part of it all: being thrown together with the kind of young women from across the continent that make you sit up and go: Wow. My biggest moments was listening humbly as someone from rural KwaZulu-Natal related the challenges of working with people living with HIV/Aids with no access to decent food, or how an Ethiopian women and her friends had started a bead-making business that was empowering hundreds of women. No aid, thank you very much.

I desperately wanted to be friends with every single one of them and am still replying to the flow of tweets, Facebook posts and emails that are continuing our conversation. I hope it is here that I can talk through my very real fears for our country and continent’s uncertain future in the face of growing radical and populist politics and failing accountability mechanisms.

And that is the beauty of the US’s engagement with the continent: positioning itself as a space where discussion can take root, blossom, and soar, all within the auspices of the world’s super power as they work top down and, as evinced with us, bottom up, to globalise the American dream.

Another knot in my stomach. But one I will have to live with.

For the latest news on Michelle Obama click here:

The press council appeal panel ruled that the blog calling for white men to be disenfranchised did not incite violence or hatred based on race.
Read more
National

A fake blog post proposing that white men be stripped of their voting and property rights “might be landing a blow among many other blows”.
Read more
National

The M&G editor-in-chief explains her decision to leave the publication after overseeing a rapid turnaround in sales and circulation.
Read more
Special Reports

Verashni has been with the paper for six years including a year as editor.
Read more
Advertising