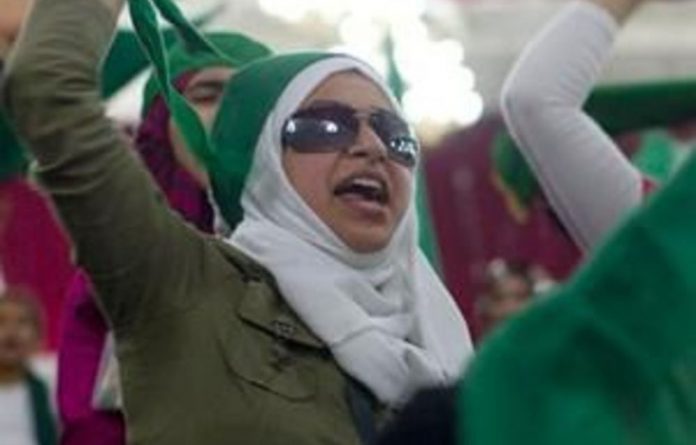 Screaming and chanting his name, the 500 women and girls vowed their undying love for one man. Not a pop star or Hollywood actor, but Libya’s Colonel Muammar Gaddafi.

“Kill all the people in Libya first, then come for Muammar Gaddafi,” said 14-year-old Fatima Hassan. “I will kill myself if Muammar Gaddafi is killed. I know our people will kill themselves if he dies.”

The event in Tripoli on Sunday was billed as a graduation ceremony for women who had been given weapons training in defence of the regime. About 50 international journalists, invited and escorted by government minders, arrived to find them clapping, singing, ululating, punching the air and waving green flags in a tented hall set up with chandeliers and two colossal flatscreen TVs.

There were elderly women and little girls in the hall, and every age in between. Some held aloft pictures of a luminous Gaddafi, one framed in green Christmas tinsel. A woman waved a green flag and wore a sparkly green cape, green scarf and green bandana with badges showing Gaddafi’s face. Next to her was a woman wearing a watch that displayed his image.

Gaddafi groupies
Reporters pondered whether the event had been stage managed entirely for their benefit. The painted the first dozen rows green, but behind them were hundreds of empty seats. Outside was a rattle of gunfire as some enthusiastic graduates fired their new weapons into the air with little regard for where the ammunition might land.

There was also much idolatry, most of all from the teenager Fatima, who said her father is an engineer and she attended an international school near Edgware Road in London. “We love Muammar Gaddafi and we want to save our country,” she said.

“He made us happy. He makes us eat and makes the country free to do what we want. Before, we weren’t free. My grandparents tell us that before Gaddafi, it was bad, there was no bread. He saved us.”

Pledging to fight for the man depicted on her necklace, she explained: “There are no women and children now.”

Fatima claimed her five brothers have gone to fight for the regime against rebels in Benghazi and Misrata. Asked how she would feel if they were killed, she replied: “It doesn’t matter. I don’t care. It’s for the leader.”

With government minders hovering nearby, there was similar fervour from Habib Abdul Qasem (39) a nanny dressed in military fatigues. “Of course I will defend myself and my country,” she said. “We are an armed nation; everyone in this country has weapons. I keep a gun in my house. I’ve never used it but if the conditions change I will use it against the Crusaders.”

Stuff of legend
Nadia Ali (30) an unemployed interior designer, added: “We want a Libya that’s strong. Muammar Gaddafi is our father. There is some problem in the rebels’ head. Muammar Gaddafi is a good man who loves the Libyan people. He gave us something.”

Gaddafi’s detail of female bodyguards has become the stuff of legend during his near 42-year rule. It is not yet clear what role the newly-trained women will play militarily and whether they could be pressed into action if the Libyan army is overstretched.

Moussa Ibrahim, a government spokesperson, said: “Libyan women are now joining the armed forces against Nato. We are training them. Their main role is defending homes. We have no plan to send them to the front line. They are not trained for that, and our army is very effective.”

But he added with a rhetorical flourish: “We are going to make sure that every mother, the symbol of love and creation, is a bomb, a killing machine.”

Ibrahim insisted that the regime is stronger than ever and there has been no discussion of surrender. “We are prepared to give 1.2-million weapons away and we have been training many, many, many ordinary Libyans.”

The set piece over, journalists were shepherded back to their official bus, but it remained stationary for long minutes as the celebratory gunfire came ever closer. There was growing anxiety on board over the potential for stray bullets. When this was expressed to a government minder, he replied tartly: “Your planes are bombing the Libyan people and you are afraid of a bullet?” – guardian.co.uk

Just over a year ago, veteran radio presenter Xolani Gwala’s cancer was in remission. He spoke to the Mail & Guardian once he was back on air.
Read more
Advertising
Continue to the category
Education