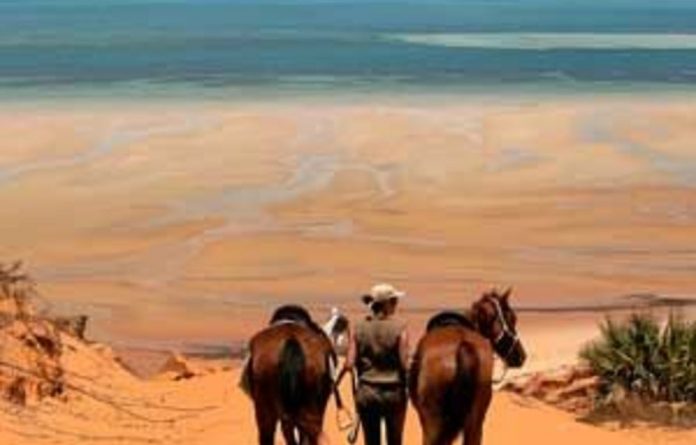 Two years ago I received an email from a woman called Amanda ­Retzlaff. Her story sounded extraordinary: she and her husband had fled Robert Mugabe’s Zimbabwe with 104 horses, which they had rescued during the land invasions and taken across the border to Mozambique.

They were trying to piece together a new life and start a riding-holiday business from scratch. Would I like to come visit?

I tried to forget about Retzlaff’s invitation, but from time to time I would check her website. And, at the beginning of this year, I realised I could hold out no longer: I had to swap my armchair for a saddle.

The Retzlaffs met me in the last week of March in the tiny, shambolic (though being expanded and refurbished) airport of Vilanculos — a seaside resort 750km north of Maputo. They are what my grandmother used to call “real people”. Mandy is warm, talkative, good company. Pat is ­quieter and a fine horseman: he makes his own saddles, shoes his horses and escorts all the rides.

Mozambique, unlike Zimbabwe, is uncontroversially peaceful now. I spent the first night in Archipelago Lodge, a resort of self-catering chalets on the ocean south of Vilanculos. Each chalet is spacious, with a thatched roof and a view of the Indian ocean.

It is a serene, reasonably priced base for a Vilanculos riding holiday. Mandy and Pat are open to riders of all abilities and can customise rides. It is too hot to ride all day — two to three hours at a stretch feels right. They proposed riding out on the afternoon I arrived. And that ride was a revelation.

Personal and magical
The beaches of Vilanculos are wide — they go on forever when the tide is out — and bordered by mangrove swamps and the Indian Ocean. I ride regularly and have had several holidays on horseback, but Mozambique has to be the most outstanding beach riding destination. I have never been allowed such freedom on a horse holiday.

Here we were not herded or bossed, though Pat was mindful of safety. The atmosphere was personal, ad hoc and magical. The heat was intense but there was a constant breeze coming off the sea. The silk on my hat kept threatening to blow away.

The sea, in many variants of turquoise, was calm, though it rushed into the mangroves at speed. I had forgotten how the African sunlight transforms everything. And nothing could be more wonderful than speeding along the sand past egrets, herons, a solitary ibis. You might dodge a bed of shells, a rock or the rope securing a fishing boat, but otherwise there were no obstacles. We rode along the north beach and up a red dune to a place nicknamed Fingerprint of God. He, I observed, seems to have had his hands all over this place.

Time and money
In Mozambique, everything happens in its own time. There is a saying that in the West we have money; in Mozambique they have time. The truth is that Mozambique needs our money: its tourist industry has huge potential but the country is still (blessedly for visitors) not a major destination.

And it is perhaps also true that we need its time. My timetable involved nothing more challenging than leaving Vilanculos for a 20-minute boat trip to the bewitching Bazaruto archipelago.

First stop was Benguerra island, 14km from the mainland, where a half-dozen of Pat and Mandy’s horses live and rides are overseen by Lucy Campbell Jones, an engaging Englishwoman who first came to Mozambique as a volunteer.

The plan was to sample the varied pleasures of Benguerra and neighbouring Bazaruto islands. My life has not featured many luxury hotels, but I adjusted with indecent speed to Benguerra Lodge and being waited on by the Byronic Sergio in his floor-length white gown and scarlet ­cummerbund. There was no resisting his ability to produce iced tea at the double, summon a dhow or string up a shady hammock.

When I lay in the hammock, I reasoned that everyone deserves to visit this country once. I walked down from Benguerra Lodge to a barbecue on the beach one night, where a fire was burning and its smoke, driven by breeze, poured out horizontally — it reminded me of our beach riding as it vanished rapidly alongside the sea.

Other pursuits
The riding on Benguerra is out of this world: the horses are safe, well schooled and fit. One late afternoon, Lucy and I cantered along the beach and trotted inland past beautiful freshwater lakes where there were cashew-nut trees (the toxic husks are used to brew liquor), wild orange trees and gatherings of flamingos.

On Benguerra I was introduced to non-riding pursuits too: fishing and snorkelling. I think of fishing as a wait at the edge of a dreary English pond and had not realised it could be so active. At one thrilling moment, guided by expert fisherman Graham Pollard, I caught a ladyfish which, with unladylike athleticism, promptly flung herself back into the sea. At another, I hauled in satisfactorily a majestic green spot trevally.

From the boat we saw several dolphins and a turtle (I was thrilled to catch its beady eye on camera). Sometimes it is also possible to see humpback whales and dugongs in these waters.

The next day I went snorkelling above a coral reef and was entranced by the shoals of parrotfish, the finest of which was maroon with traces of gold — like swanky hotel upholstery. I also saw powder-blue surgeonfish and goatfish — white with inky dark spots. I could not believe how unfazed the fish were, as though we were of their company, just larger and more cumbersome with our rigid flippers.

I stayed one night in the immaculate, modern Marlin Lodge (also on Benguerra), where I was treated to a memorably over-the-top “bush bath” scattered with hibiscus petals in an outdoor playpen made of palm leaves. At Marlin Lodge they toss their flowers about freely — like confetti for the many ecstatic honeymooners who fetch up there.

I spent another night on Bazaruto island, a mile or two north, at Indigo Bay — a magisterial hotel for those who prefer not to give modern life the slip altogether (air conditioner, computer room and, a rarity in Mozambique, sparkling mineral water).

But what I most enjoyed was an outing with Indigo Bay’s Mozambican horseman, Domingo, who took me up a 100m sand dune called the Pelican. Going up was easy enough, but then I had to descend an almost vertical sandy slope. It seemed impossible but I just had to trust that the horses knew what they were doing — and they did.

Abandoned and forgotten
Back on the mainland in Vilanculos, I decided the time had come to find out more about Mandy and Pat. I already knew their story had not been one of five-star luxury. They were victims of the 2001 looting of farms in Zimbabwe’s Chinhoyi ­district.

As the land invasions spread, thousands of horses were abandoned on the farms or destroyed. Many ­veterinary surgeons, depressed by the relentless slaughter, left the country altogether.

The Retzlaffs took in horses from miles around and moved from one leased farm to another as the land invasions intensified. Often, they would have to pack up and move on in less than four hours. After their sixth eviction, they went to Mozambique, by which time, they had to acknowledge, the horses were becoming “a huge burden”. Mandy was starting to panic: “What on earth are we going to do with all these horses?”

Pat replied: “We are going to start a horse safari.”
He took his horses off the truck at 4pm one day and was taking guests on rides the next morning: “I went up the beach and found a few paths. The customers loved it.”

And the horses themselves were “delighted by beach life — as though they were on holiday”. It was then that Pat realised he had “never ridden anywhere as beautiful”.

But on February 22 2007, two months after they’d settled into this new life, disaster struck: a cyclone flattened Vilanculos. “We didn’t get a single customer for six months.” Did they think then of giving up? “No, because the horses had become part of our lives. There was no question of deserting them.”

More tragedy
They got by with help from volunteers from overseas but, on November 14 last year, disaster struck again. They had moved 26 horses to an area where there was fresh drinking water and grasslands. “We thought we were being clever but we weren’t. The horses ate a rare poisonous plant called Crotalaria and started to die. We lost a horse every three days. We were pulling dead horses around in a Land Rover and digging pits to bury them.”

They had to hide this tragedy from clients and “paste smiles on our faces” while weeping behind their backs. “We had been through so much together,” Mandy told me with tears in her eyes.

On my last morning, the plan was for a swim on horseback after a final gallop along the beach. By this stage, any attempt at equestrian propriety had gone and I was, like my hosts, riding in Crocs (practical, as it turned out). As I rode into the sea, I registered, suddenly, an uncanny weightlessness as the water lifted half a tonne of horse and me. The horse was swimming horse paddle, moving like a stocky dolphin. It was wonderful. I laughed at the absurd joy of it — this was the ride-swim of a lifetime.

And then it was time to say goodbye. The previous night I did my last-minute packing with reluctance. I noticed that I was behaving as though there were all the time in the world. And that, I now realise, is because Mozambique makes you believe that there is. —