At least 10 killed in attack on hotel in Kabul 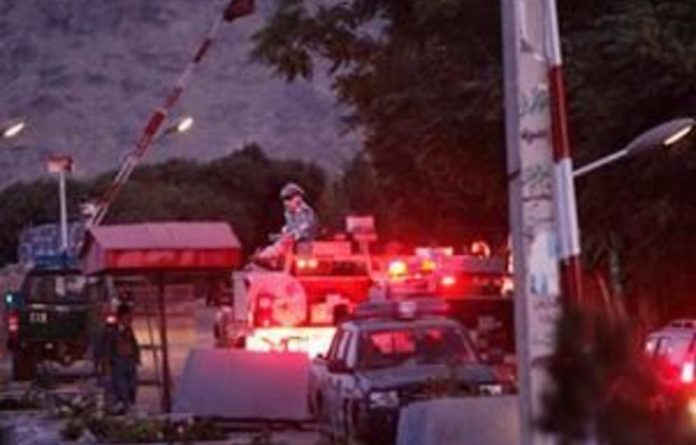 At least 10 Afghan civilians were killed when suicide bombers and heavily armed Taliban insurgents attacked a hotel frequented by Westerners in the Afghan capital late on Tuesday, Afghan officials said.

Helicopters from the Nato-led force killed the last three insurgents in a final rooftop battle, a coalition spokesperson said. Smoke rose from the roof of the Intercontinental hotel as the sun rose over Kabul after a battle lasting several hours.

Sediq Sediqqi, a spokesperson for the Afghan Interior Ministry, said at least six Afghans had been killed.

The attack came the night before the start of a conference about the gradual transition of civil and military responsibility from foreign forces to Afghans. The hotel was not one of the venues to be used by the conference or its delegates, an Afghan government official said.

It was also a week after United States President Barack Obama announced plans for the initial withdrawal of 10 000 US troops from Afghanistan by the end of this year, with another 23 000 to leave by the end of 2012.

Reuters witnesses heard at least seven blasts over the course of more than two hours, with bursts of gunfire heard during the late-night attack on the Intercontinental, one of two main hotels used by foreigners and Afghan government officials in Kabul.

The Nato-led International Security Assistance Force (ISAF) said there had been gunfire coming from inside the hotel.

One Reuters witness said smoke could be seen rising from the hotel, although no fires were visible. Afghan security forces surrounded the hotel and firefighters arrived after the last of the insurgents were killed.

Sediqqi said six or seven insurgents had been involved in the attack, one of the worst in the Afghan capital in months. “All have been killed,” he said.

Zahir also said three police officers had been wounded as they cleared the hotel on the city’s western outskirts.

Mujahid, who spoke to Reuters by telephone from an undisclosed location, said heavy casualties had been inflicted.

The Taliban often exaggerate the number of casualties in attacks against Western and Afghan government targets.

Flares, tracer rounds
One blast was heard at the start of the attack and then three more at least an hour later, one of the Reuters witnesses said. Bursts of gunfire were heard over the same period and flares lit up the sky over the hotel.

Reuters television footage showed police firing tracer rounds into the air as other officers moved through the hotel. Power was cut in the hotel and in surrounding areas after the attack.

The hotel, built on a hillside in western Kabul with heavy fortifications all around it, is often used for conferences and by Westerners visiting the city.

Police threw up roadblocks immediately after the blast, stopping people from approaching the area.

Violence has flared across Afghanistan since the Taliban announced the start of a spring offensive at the beginning of May, although Kabul has been relatively quiet.

The last major attack on a major Kabul hotel used by foreigners was in January 2008, when several Taliban gunmen killed six people in a commando-style raid on the nearby Serena hotel.

The increase in violence comes as Nato-led forces prepare to hand security responsibility to Afghans in seven areas from next month at the start of a gradual transition process that will end with all foreign troops leaving Afghanistan by the end of 2014.

The two-day conference to discuss the transition process was due to begin in a government building in the centre of the city on Wednesday.

Violence across Afghanistan in 2010 was already at its worst levels since the Taliban were ousted by US-backed Afghan forces in late 2001. – Reuters