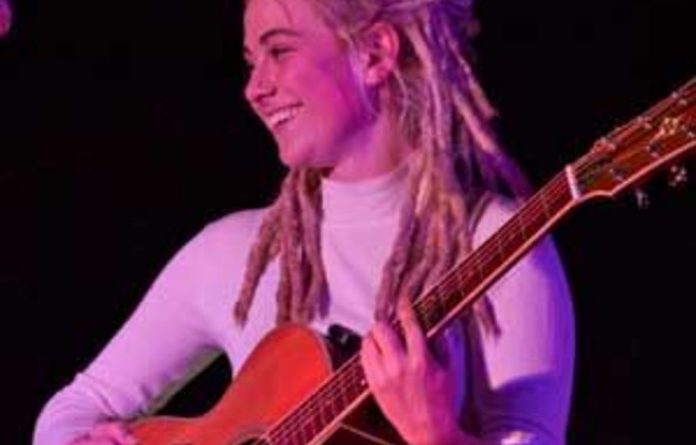 A staple dish on my National Arts Festival menu is always folk music. It’s the soul food that can cure a week’s worth poor nutritional choices.

An erratic diet of new, interesting and experimental art can be a festival-goer’s delight, but it can wear on even the strongest of constitutions. A dose of female folk was just what I needed to refill my tank and sustain me for the next half of the Festival.

The siren sounds of Meri Kenaz are enthralling. They are both earthy and otherworldly. Kenaz tip-toes around stage with a nimble, fairy-like grace, dancing barefoot as flaxen dreads float her wake. Her vocal rage spans from low breathy whispers to deep bellows. She can yodel like Jewel and philosophise like Jodi (Mitchell).

This year, the tireless singer/songwriter and guitarist has been backed by the seasoned skill of keyboardist and percussionist, Martin Wolfaardt and moody and meticulous bassist, Ben Badenhorst, who make up the Appropriate Context.

Kenaz is certainly one of the hardest working musicians at the Festival, performing on the Arena and the late night Sound Kiln, and discussing song writing at WordFest. And for the remainder of her Festival stint, she’ll be performing solo shows on the Fringe.

Kenaz seems to possess all the elements of a first-rate singer/songwriter — her musical ability is impressive, her lyrics are genuine, and Kenaz, herself, is radiant — yet, something is amiss. She promises so much in voice and spirit though she fails to enchant. Perhaps the “appropriate context” for Kenaz’s soulful and soothing tunes is a campfire. Her a vocal range can get tiresome with its constant to-and-fro lilting, after a while it seems gimmicky. Perhaps Kenaz is resisting the polished and well-harnessed performance, purposefully keeping it real and rootsy, but the flurry of musical stunts were energy unwisely spent.

Going the whole way
Where Kenaz can’t quite deliver, taking us through the throws of musical experimentation, Laurie Levine brings us the whole way. With the well-focused, distilled craft of a mature songstress, she explores the highs and lows of love and loss while exemplifying a favourite quote of hers: “Happiness is a sad song”.

Her Contemporary Folk sound draws on the American tradition and Bluegrass, with elements of Eastern European Gypsy ballads and French chanson. Her voice blends the sweetness of Katie Melua with the quirkiness of Joanna Newsome. Where Kenaz is too lyrically abstract, Lavine is so right on.

Certainly Lavine’s soulful sound would not be the same without the backing of dynamic multi-instrumentalist, Lize Wiid. Lavine’s strong vocals and guitar are perfectly paired with the captivating Wiid’s funky and unexpected contributions.

Playing the accordion, keyboard and kazoo, these surprising details create a richness and depth of spellbinding magnitude. Festival critics have been wooed by the duo, naming them one of the Standard Bank Ovation Award winners.

Now that I’m feeling well-fed and soul-sustained I think I can face almost anything the Festival throws my way — bring on the bizarre and dark, the deeply morose, the confrontational or just plain bad. I’ve been given what I need in the form of female folk rock.