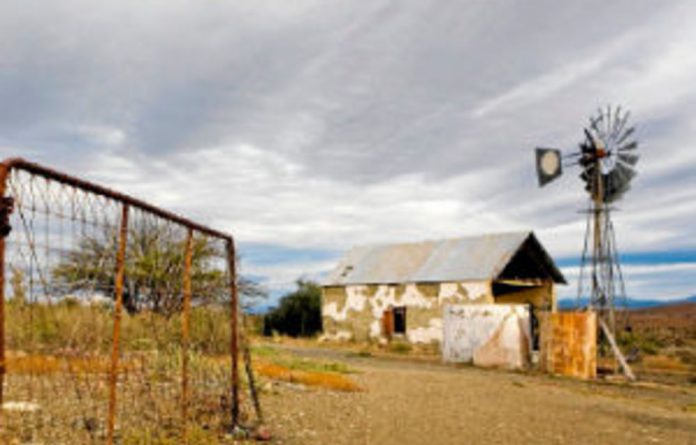 South Africa has such large shale-gas reserves that they could neutralise the balance of payments deficit.

According to Tony Twine, an Econometrix economist, incorporating unconventional natural gas into the primary energy mix of the country, in which crude oil is the single largest import, could revolutionise the position on the balance of payments. “Displacing oil and gas imports would remove part of the necessity for keeping high positive rates to attract foreign capital.”

It would also have an impact on electricity generation, liquid-fuel synthesis and petrochemical feedstock production, Twine said.

There is an estimated 14-trillion cubic metres of natural gas in the Karoo and, according to the United States Energy Information Administration, South Africa has the world’s fifth largest recoverable shale gas reserves.

Hydraulic fracturing involves forcing a fluid, typically 99% water and sand and about 1% chemical additives, into the shale at high pressure. This technology has been in use for more than 60 years but has only recently become contentious in South Africa.

Fracking of the shale rock formations under the Karoo came to light when Royal Dutch Shell applied for prospecting rights. A moratorium has since been placed on all applications by the department of mineral resources.

An estimated 28-trillion cubic metres is recoverable in North America and, according to the American Petroleum Institute, the natural gas industry supports nearly three million jobs and adds about $385-billion to the national economy.

Impacts
A study released by PricewaterhouseCoopers last month, “The Economic Impacts of the Oil and Natural Gas Industry on the US economy in 2009: Employment, Labour Income and Value-Added”, showed that the US’s oil and gas industry remained a steady source of economic activity and job creation even during the recession. In 2009, the industry supported 9.2-million people in the country and accounted for 7.7% of gross domestic product (GDP).

Oil companies have identified natural-gas prospecting areas that account for more than 20% of South Africa’s land surface and the potential economic impact is significant.
Koos Pretorius, the director of the Federation for a Sustainable Environment (FSE), said companies such as Anglo American, Sasol, Falcon Oil and Bundu Oil and Gas were all looking at gas exploration in areas that included KwaZulu-Natal, the Free State and the Eastern Cape.

Twine said it was too early to estimate what effect it might have on South African GDP — the economic benefits would be known only after proper exploration had taken place. Brian Kantor, an economist at Investec, said that 14-trillion cubic metres of recoverable gas would be equivalent to about 400 years’ worth of petroleum consumption in South Africa. “If the reserve is as big as the currently favoured estimate, the energy balance could be vast,” said Kantor.

But, Twine said, not a cent could accrue to GDP or fixed investment until exploration could begin.

Jonathan Deal, the chairman of the Treasure the Karoo Action Group, told the Mail & Guardian the main concern with fracking was water consumption. “By 2025, South Africa won’t be able to manage with its current water use, and that’s excluding fracking, which is a water-thirsty procedure.”

Furthermore, Deal said, the process will pollute the water that we do have. Critics also said that fracking poses a risk to groundwater, even though shale was generally thousands of metres below the water table. The major fear was that drilling fluids could seep into aquifers if well casings failed.

The biodiversity of the Karoo, he said, was irreplaceable. “For Shell to claim it will leave to Karoo in a better state than before is simply foolish,” Deal said.

Shell claimed there would be environmental benefits. An analysis based on data from the European Union showed that gas-fired power was 40% more efficient than coal, emitted up to 70% less carbon dioxide (CO²) and replacing coal with gas for electricity generation was the cheapest and fastest way to meet CO² reduction targets. It had similar operating costs to nuclear and coal and was a stable alternative energy supply for South Africa. Shell believed it was an opportunity to develop a new industry that would deliver sustainable economic, environmental and energy benefits.

But, Deal said, the capturing of fugitive methane emissions from the point of capture to the point of distribution amounted to only 7%. He said that methane was one the most dangerous greenhouse gases to be emitted into the atmosphere and asked whether the change from coal to gas was warranted for such a “small difference”.

Shell told the M&G that only exploration would determine how large the shale-gas reserves were. It also did not know what economic impact shale gas could have on the economy.

But it has yet to be seen whether there is even any profit there for the taking. Chris Hartnady, the technical director at Umvoto Africa, said that profit in the field was limited by energy returned on energy invested.

Shale gas, he said, was expensive to mine and only marginally economical. The productivity of shale-gas wells also declined quickly and therefore the rate of drilling wells had to be escalated. It is not sustainable in the long run,” he said. Fracking required the pumping and transporting of water and necessary infrastructure. It also required the treatment of contaminated flow-back water.

An article published last week by the New York Times, “Insiders sound an alarm amid a natural gas rush”, suggested that shale gas might not be cheap and easy to extract, and triggered widespread outrage. Sources in the article said: “Shale plays are just giant Ponzi schemes and the economics just don’t work.” The process was described as “inherently unprofitable”.

But studies of the economic impact of the natural-gas industry on American communities suggest otherwise. In 2009, West Virginia’s natural-gas industry generated more than $12-billion in business, created more than 24 000 jobs in the state and paid more than $550-million in wages. A 2008 investigation by the Ecosystem research group reported high growth in Sublette County, the largest gas-producing county in Wyoming. Economic development in the county between 2003 and 2006 rose 41% in three years. Household income grew 128% and total personal income 81%.

Another study on the economic impact of the Haynesville shale on Louisiana found that extraction activity generated about $10.6-billion in new business sales during 2009 within the state, in turn creating nearly $5.7-billion in household earnings that year.

But Deal said the job figures coming out of the US natural-gas industry, in general, were not very high and the sustainability of the jobs created was questionable. “These gas wells last five to 15 years. After that, the environment is literally fracked and the jobs are no longer there.”

Craig Smith, the executive manager for the Geological Society of South Africa, said the conventional wisdom about shale gas was that it was a fantastic new energy source but the reality was far more sobering. “There are a lot of claims without geological back-up,” he said.

Although the potential gas deposits were of a significant quantity, they were not nearly as great as the prospecting grounds in the US. “American geology lends itself to that,” Smith said, “I don’t think South Africa has enough basic geological information about the Karoo.”

Twine said it would require at least a decade of investment in both exploration and extraction technology.

Although there were people who believed the Karoo should be sacrificed for the benefit of the country, Pretorius asked where it would stop.

“Then we must also sacrifice Mpumalanga for coal, Gauteng for gold and half of the North West for platinum. In the end, what will we have left?”

International body protects Golden Age of Gas
Uncertainty in the global energy sector has presented an opportunity for natural gas. According to a special report on world energy released by the International Energy Agency (IEA), the time has come for natural gas to play a greater role in the global energy mix. The report proposes the Golden Age of Gas Scenario (Gas Scenario), which maps a positive future for natural gas and makes more favourable assumptions than those adopted in the New Policies Scenario of the World Energy Outlook, released by the IEA at the end of 2010.

Total recoverable resources, the report says, could sustain today’s production for more than 250 years. But the IEA warns that timely and successful development depends on a complex set of factors, including policy choices, technological capability and market conditions.

Unconventional natural-gas resources, such as shale, are now estimated to be as large as conventional resources and they account for 60% of marketed production in the US. Renewables are expected to become increasingly competitive as fossil-fuel prices rise and technologies mature.

But the IEA says government support is a critical factor in determining how quickly this occurs. Lower gas prices, as assumed in the Gas Scenario, may put pressure on some governments to review their policies and support.

Effective, transparent and stable regulatory frameworks are still needed in some regions, particularly for unconventional gas. The IEA says there will always be uncertainty: lower economic growth, greater cost or other obstacles to unconventional gas production, higher achievements in energy efficiency and changes that improve the relative competitiveness of other fuels.