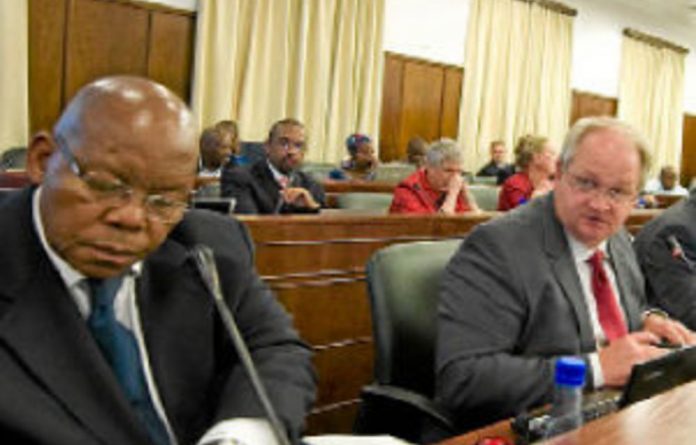 Minutes of a shareholders’ meeting called by Roy Padayachie, the communications minister, last week to amend the SABC’s articles of association back up charges of political interference in the governance of the public broadcaster.

The minutes, obtained by the Mail & Guardian, reveal how board member Peter Harris objected to the lack of consultation with the SABC board, particularly as the amendments “would widen the authority of the shareholder [the government] with regard to acting appointments to key executive director positions”.

Click here to read minutes of the shareholders’ meeting

Calls have been made by concerned parties, including the Save Our SABC Coalition, for the minutes of the meeting to be released in the public interest.

A respected lawyer, Harris resigned a day after the meeting, at which he pointed out that it was “poor corporate governance” for a shareholders’ meeting to be called at a day’s notice when it was dealing with a multi­billion-rand company.

The minutes reveal that, in spite of Harris’s objections, Padayachie used the meeting to pass key amendments to the articles of association to facilitate the appointment of any employee to the SABC’s three top management positions.

Apparently, the purpose was to enable current news chief Phil Molefe to take over as acting chief executive officer.

Harris declined to comment this week. “I have sent my resignation to the president,” he said.

‘Round Robin’
The M&G understands that attempts were also made to hold a board meeting after Padayachie passed the amendments, but there was not a quorum and board chairperson Ben Ngubane, who was away on business in Japan, could not be contacted.

However, a written resolution was sent out by “round robin” later that day. Board members were asked to vote on the withdrawal of the board’s earlier decision to extend the contract of acting group chief executive Robin Nicholson and on the appointment of Molefe from July 1, until a new appointment was made.

Amendments were allegedly made to the minutes after some board members objected to omissions.

Before passing the “special resolutions for the amendment of the articles of association of the company”, Padayachie told the meeting that the board had been motivating the proposals for several months and that some directors “had urged the shareholder to act speedily to amend the articles”.

Board members Cedric Gina and Desmond Golding supported him, saying that the board had been considering the amendments “for a considerable period of time”.

Padayachie told the board members present that the proposed amendments were within his authority and there was no need for consultation or for the approval of the board for them to take effect.

“The shareholder [Padayachie, as a representative of government] informed the board that he was satisfied that the proposed amendments were sound in law,” the minutes reveal.

The minutes show that board member Pippa Green, the head of the journalism department at the University of Pretoria, expressed her concern that the amendments were being proposed to address a current impasse and were not in the SABC’s long-term interests.

But newly appointed board member Lumko Mtimde, the chief executive of the Media Development and Diversity Agency and a vocal supporter of a media appeals tribunal, said that the amendments were intended to empower the board with “more latitude” if someone was needed to act in a top management position.

The special resolution made it possible under Clause 19 of the SABC’s articles of association for the board to appoint any employee of the corporation “as it deems fit” and subject to conditions to act in the positions of acting group chief executive, chief financial officer and chief operations officer.

A number of broadcasting organisations involved in the Save Our SABC coalition called an emergency meeting this week to discuss whether Molefe was suitable for the job although Molefe himself said he was quite confident about his abilities. “It’s not an easy job but it’s not insurmountable,” said Molefe, who has already moved into his new office.

“I am quite suited to this post as I have more than 30 years’ experience in media, both print and broadcasting.

“There aren’t many who will match up to my experience. I’ve been at the SABC for more than 20 years and have served the corporation in many capacities, presiding over television, radio, external services and international affairs.

“I’ve managed budgets and my track record speaks for itself. Not one of the departments I’ve headed has had a bad financial report.”

Preferred candidate
A board meeting last Friday passed a resolution to back Tau Morwe, the chief executive of the Transnet Ports Authority, as the candidate for permanent group chief executive, the M&G has learned.

Although Padayachie’s office has denied it, it is alleged that the minister favours Joe Mjwara, a director of Business Connexion and a former deputy director general in the communications department.

Tiyani Rikhotso, Padayachie’s spokesperson, has denied that the minister was trying to influence selection for the post or that he acted improperly in changing the SABC’s articles of association.

“Scope was needed to widen the choice of acting executives and the matter had been outstanding for a long time,” said Rikhotso.

For Nicholson, it has been a 10-year political rollercoaster at the SABC — and he is not going quietly; he will file a claim for R1.5-million in damages. He said this represented what he would have been paid for the six-month extension of his contract.

Nicholson said he had worked hard to get the SABC back on its feet and was on leave when his contract was unexpectedly rescinded last week.

“The board was happy with the turnaround strategy and I appeared to have its full support.

“When the job was advertised, I applied and believe I came out on the shortlist as the number-one candidate,” Nicholson said. “But I was lobbied to withdraw and was told it was not politically acceptable for me to be appointed to the post. A board meeting was called to extend my contract for six months and the whole board was present. A resolution was taken on this and we shook hands.”

He described his removal as “a political hatchet job. My departure was directly manufactured by political forces”.

‘Revised operating model’
Nicholson said inroads had been made in turning around the SABC and that he had handed a revised operating model to the SABC board that would save the SABC R125-million a year.
The board now had to consider cutting 700 posts at the broadcaster, he said. Several high-profile executives had already been axed in terms of the new cost-cutting strategy, including former SABC chief people officer, Phumelele Ntombela-Nzimande, the wife of Blade Nzimande, the higher education minister.

Turning the corporation around was not an easy job, Nicholson said, but he pointed out that SABC3’s market share had recently gone up by 2% and radio by 2.1-million listeners.
In 2009, the treasury extended a helping hand to the struggling broadcaster, approving its application for a government bank guarantee of R1.47-billion, to be made available in tranches.

A drawdown of R1-billion was made available immediately and it was agreed that the remaining R473-million would be released only on the SABC’s submission of a detailed project plan committing it to explicit revenue targets and cost-cutting measures.

The SABC has met the requirements for a drawdown of the rest of the money if it is needed.

Although austerity measures at the SABC appear to be working, accusations of political interference have been a destabilising factor. Last year, the SABC was plunged into controversy when Ngubane, acting unilaterally without the approval of the board, appointed Molefe as head of news.

A submission to Parliament by board members was leaked to the M&G, revealing that Ngubane allegedly told some board directors he was acting under direct orders from President Jacob Zuma in making the appointment — although he later emphatically denied it.

But the submission laid bare the concern of board members about political interference in the SABC’s affairs.

There are concerns that the ­battle for control of the broadcaster is reaching a peak in the run-up to the ANC’s national elective conference next year.