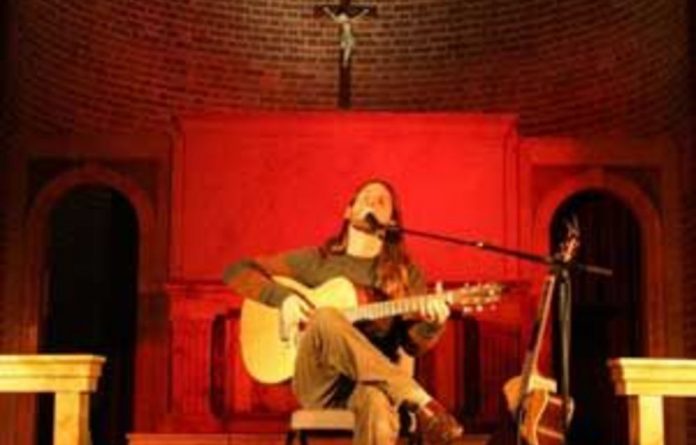 In the wash of its dim, warm light, framed by the vaulted and intricately depicted ceilings,
the Rhodes Chapel was perhaps the most appropriate setting to behold the Festival?s god of guitar, Guy Buttery.

Of course the Jesus allusions abounded as the dark hair draped his shoulders and the cruci?x above pointed evocatively to the man before the altar.

Like a true skeptic, I had steered clear of Buttery’s concerts, despite the fact he was a Standard Bank Gold Ovation Award winner at last year’s Festival. There?s nothing more boring than a solo instrumentalist touting his musical prowess with a series of dif?cult to do, but disjointed compositions entitled ambiguous things like, “Stormy Soul”.

Artists like Kenny G come to mind. But as it turns out, Buttery shared my concern. He himself confessed: “I like an untuned guitar about as much as I like Kenny G.” Thank God.

In the romance and reverence of the chapel, I was converted to this twenty-eight-year-old Durban-born folk phenomenon. The setting only complimented Buttery’s prodigious skill. His ?ngers ?ew as he bent and wound his instrument around, making liquid sounds and molding music like, well, butter. And unlike many solo instrumentalists, the music — not the skill — was on display.

Buttery took us through a number of tracks from his latest album, Fox Hill Lane, including the incredibly achey title track.

Buttery’s ability to draw from such eclectic musical genres keeps his style fresh, even inimitable. His songs are hybrids that merge different cultures and traditions, his sound embraces an ethos of musical universalism. From Afro-Celtic and Arabic blues, Buttery opens his audience to this diverse amalgamation. What Buttery called his “martian folk song” elicited an otherworldly feel as he strummed and bowed a saw, bending it to produce its eerie wallows. He stretched the limits of his instrument, beating it percussively, letting it sing jazz, folk and blues.

This wasn’t a concert showcasing a sequence of slightly altered pieces, indecipherable to the musically untrained. When Buttery played Joanna Newsome?s, The Book of Right-on
my heart melted, like, well, you know.