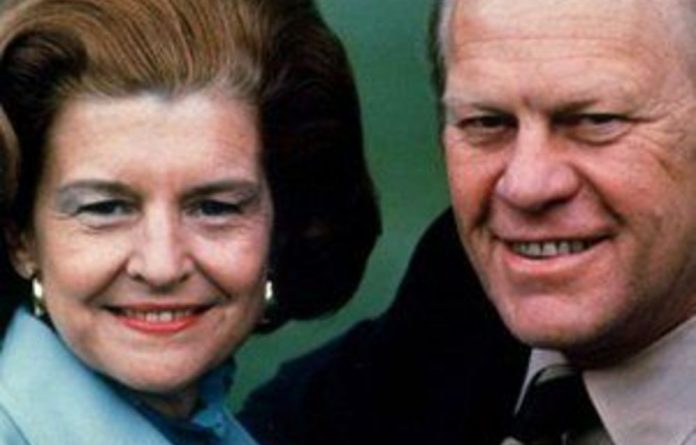 Betty Ford, the wife of the late president Gerald Ford, who overcame alcohol and prescription drug addictions and helped found a rehabilitation clinic that bears her name, died on Friday at the age of 93.

“I was deeply saddened this afternoon when I heard of Betty Ford’s death,” another former first lady, Nancy Reagan, said in a statement confirming Ford’s death.

Ford once was dubbed the “fighting first lady” by Time magazine because of her outspoken political views, which often differed from those of her husband’s Republican Party.

She strongly supported women’s rights while her husband was president from 1974 to 1977, working the phones in a vain attempt to get states to pass the Equal Rights Amendment, which sought to give women and men equality under law.

Ford’s candor was surprising for the time. She took a tolerant stance on abortion and admitted without shame that some of her children had tried marijuana. Nor was she alarmed by the prospect of her daughter having premarital sex.

Ford also was an early campaigner against breast cancer. She underwent a mastectomy in 1974, less than two months after her husband succeeded the disgraced Richard Nixon as president.

Her frank discussions about her disease helped raise awareness about breast cancer and she eventually took the same approach toward her alcoholism, which she battled even as first lady.

Ford’s problems with chemical dependency may have begun in 1964, when doctors prescribed her painkillers for a pinched nerve. She developed an addiction to prescription drugs and also became dependent on alcohol during the 1960s.

The Betty Ford Centre in California came into being in 1982 after Ford was treated for her addictions at the US Naval Hospital at Long Beach, and saw the need for treatment that emphasised the special needs of women.

“She has been an inspiration to so many through her efforts to educate women about breast cancer and her wonderful work at the Betty Ford Centre,” Nancy Reagan, the wife of the late president Ronald Reagan, said in the statement.

“She was Jerry Ford’s strength through some very difficult days in our country’s history and I admired her courage in facing and sharing her personal struggles with all of us.”

“As our nation’s first lady, she was a powerful advocate for women’s health and women’s rights,” he said in a statement. “After leaving the White House, Mrs Ford helped reduce the social stigma surrounding addiction and inspired thousands to seek much-needed treatment.”

Former president George Bush described her as a valued friend who “made countless contributions to our country”.

Ford remained an active chairperson of the center’s board of directors for decades and also worked to help handicapped children, the arts and the fights against HIV/Aids and arthritis.

For most of her adult life, Ford was best known as the wife of Representative Gerald Ford, a Michigan Republican, and the mother of four children. The couple had planned to retire from Congress in 1973 when Nixon, already under fire in the Watergate scandal, chose Ford to serve as vice-president after the resignation of Spiro Agnew.

Ford became president after Nixon resigned on August 9 1974, but he was defeated when he ran for the presidency in 1976 by Democrat Jimmy Carter. Betty delivered her husband’s concession speech because he had lost his voice on the campaign trail.

Born April 8 1918, in Chicago, Elizabeth Bloomer was raised in Grand Rapids, Michigan. She wanted to be a dancer and studied under Martha Graham and modelled in New York before returning to Grand Rapids and marrying a furniture salesman. They divorced after five years and she married Ford in 1948.

In her later years, Betty Ford slipped from the public eye but returned when her husband of 58 years died in 2006. Her stately demeanor in time of grief brought her to the attention of a whole new generation that possibly knew her name only from the famous clinic. – Reuters

Grammy-winning singer Whitney Houston, one of the most talented performers of her generation, died on Saturday in a Beverly Hills hotel room.
Read more
Friday

The Artist, The Descendants rake in Golden Globes

Betty Ford, the wife of the late president Gerald Ford, who overcame addictions and helped found a rehabilitation clinic, died on Friday at 93.
Read more
Advertising
Continue to the category
Politics