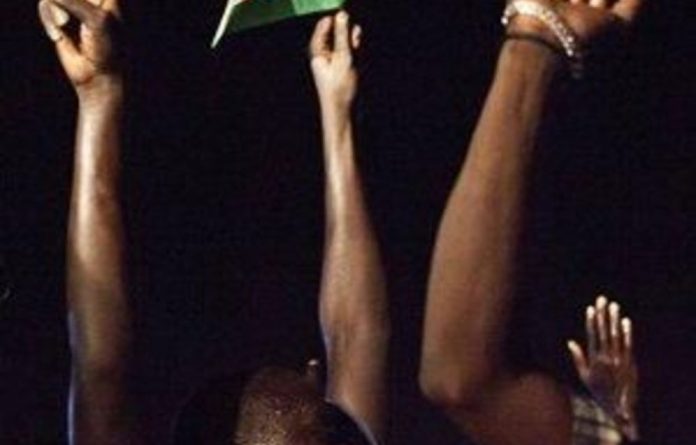 For thousands of southern Sudanese it was a night to stay out dancing to welcome the birth of their new nation. For people in the northern capital Khartoum it was a time of sadness mixed with defiance.

South Sudan, where most follow Christian and traditional beliefs, became independent on Saturday after a referendum in January agreed under a 2005 peace deal that ended decades of civil war with the Arab Muslim north.

While the south rejoiced at finally getting its freedom from the dominant north, for people in Khartoum the secession brought not only the loss of a third of the territory and much of the country’s oil resources but also a profound feeling of sadness.

“I am happy for their independence, and I believe that it will benefit them, and their future,” street artist Yaser Idriss said, sitting by a road near the Nile in the northern capital.

“At the same time however, I am sad at the fact that I feel like a part of me has been severed, contrary to my convictions,” he said.

Fellow artist Mohammed Maheyeddin agreed, wondering: “Are we going to be artistically split as well? Am I now able to draw a southern woman or not? Is she still a symbol of my heritage or not?”

“Today I drew a drawing I named Separation which depicts a southern woman walking off into the distance, leaving behind all of her memories,” he said.

Joy in Juba
Others in Khartoum were defiant, insisting the north — where 80% of the 40-million Sudanese live — was a better place without the south with which it fought for too long.

“It’s the best solution for all that they became independent. We are too different, we have a different religion, a different culture,” said Saleh Ahmed Ali, a high school teacher.

“We dont want war,” he said, while behind him a dozen of northerners danced at a party organised by a Khartoum pro-secession group called “Just Peace Movement” to celebrate what they called the “real independence” of the north.

“Sudan’s unity was a mistake as history has proven. Now we can go our own way and don’t need to listen to the needs of the south,” said El-Tayyib Mustafa, the group’s head.

“The south, for example, did not want to call Khartoum an Arab capital. We are now free and don’t need to heed their calls and wishes,” he said.

With the call for midday prayer the dancing and music are suddenly interrupted as the group all disappear into a nearby mosque.

Other northerners admitted that the northern economy might be heading for tougher times after the loss of 75% of the national oil production now located in south Sudan.

“We are one country, this is wrong,” said a man called Bedri who sought respite from the heat under the shade of a large tree.

In contrast, in the southern capital Juba tens of thousands stayed up all night to celebrate the birth of their new republic.

In the morning they queued to find a place to attend the formal independence declaration attended by African leaders, among them North Sudan President Omar Hassan al-Bashir.

“A very great day in our lives. Everything is new today,” said Jennifer Achiro, who stood for 10 hours in the blistering sun to watch the ceremony.

“Sudan will never be the same again. You can see this by the big attendance of this event,” said Chan Lok.

Thousands of South Sudanese danced in the streets on Saturday to mark their long-awaited independence.
Read more
Africa

When north and south Sudan split into separate countries on July 9, their capitals will already be worlds apart.
Read more
Africa

At least 20 people died in a shoot-out between Sudanese soldiers in a southern town, the military said, warning there was a risk of more clashes.
Read more
National

Turnout at south Sudan's independence referendum has defied gloomy expectations and is almost guaranteed to reach the 60% needed for a valid poll.
Read more
Africa

Sudanese President Omar Hassan al-Bashir made his final trip to the southern capital, Juba, on Tuesday before a January 9 vote on secession.
Read more
Advertising
Continue to the category
Politics