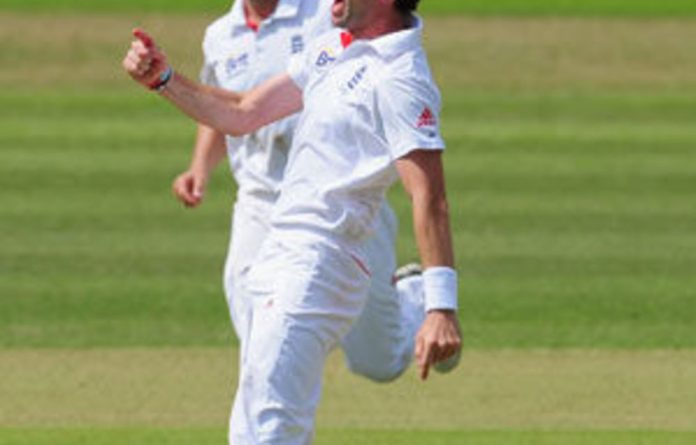 James Anderson took five wickets as England thrashed India by 196 runs to win the first Test at Lord’s on Monday.

Victory gave England a 1-0 lead in a four-match series which if they win it by two Tests will see them replace India at the top of the ICC’s Test Championship table.

India, needing what would have been a Test record fourth innings victory total of 458, were bowled out for 261.

Anderson took five for 65 in 28 overs during an innings where Suresh Raina top-scored with 78.

Kevin Pietersen was named man-of-the-match for his 202 not out in England’s first innings 474 for eight declared.

Raina bites the dust
Before tea India had seen Sachin Tendulkar’s latest bid to score his 100th international hundred, and first in a Lord’s Test, end in failure when he was lbw to Anderson for 12.

They started the final session on 218 for five, with Raina 54 not out and India captain Mahendra Singh Dhoni 16 not out.

Importantly England had a new ball that was only an over old and fast bowler Chris Tremlett used it well to dismiss Dhoni for his interval score as he edged a rising delivery to wicketkeeper Matt Prior.

Raina, on 63, with India 243 for six, survived a huge lbw appeal from Broad which replays indicated was right in front.

It did not prove decisive, however, with left-hander Raina ninth man out when he was caught behind off Anderson to end more than two hours’ resistance featuring 10 fours.

Nipped
Broad finished the match with more than 28 overs to spare when he had last man Ishant Sharma lbw for one.

Tendulkar, in front of a capacity crowd in what was the 2 000th Test of all-time and the 100th between the two countries, rarely looked comfortable from then on and he might have been lbw for 11 to Broad.

Tendulkar spent 38 balls on 11 in all but it still seemed as if it might be his day when, on 12, he was dropped by England captain Andrew Strauss at first slip off Anderson.

But two balls later Anderson nipped one back to strike Tendulkar in front of his stumps and this time New Zealand’s Bowden raised his finger to end a becalmed 85-minute innings that featured just one boundary.

India were 165 for five with the 38-year-old Tendulkar, who has now made 195 runs in nine Test innings at Lord’s at an average of 21.66 with a best of 37 four years ago, contemplating the possibility his glittering career will not include a Test century at the “home of cricket”.

‘Outstanding’ England
India had started the day on 80 for one, with Rahul Dravid 34 not out and Venkatsai Laxman 32 not out after Prior’s unbeaten 103 on Sunday had rescued England from the depths of 62 for five.

Dravid, who made an unbeaten century in the first innings, was out for 36, caught behind playing away from his body off Anderson.

Laxman, in trademark style, flicked Broad of his legs for a boundary to complete a 104-ball fifty featuring eight fours.

But he gave his wicket away on 56 when he pulled Anderson to Ian Bell at mid-wicket before Gautam Gambhir was lbw to Swann for 22.

Fingers crossed
“It’s always tough to bowl sides out on the fifth day, if you’re going to do it you need a disciplined bowling attack, I can’t praise them enough, they stuck to their task well,” he told Sky Sports.

“We had to work hard, India didn’t give anything away. India are a very, very good side and showed glimpses of it in this test, I’m sure they’ll improve,” Strauss said.

But he added: “It’s a long series, we have three more tests to go and more exciting cricket left. Fingers crossed for Trent Bridge.”

The series continues with the second Test at Trent Bridge starting Friday. — AFP