A slice of prehistory 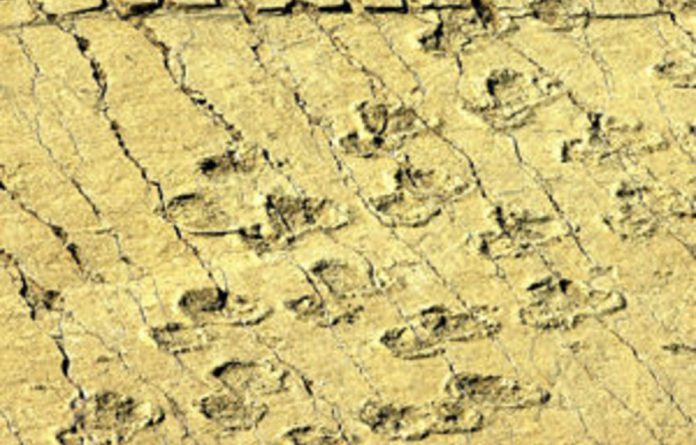 It’s brutal vandalism. I’m staring at what was, until very recently, the largest set of dinosaur footprints on Earth — 581m of vicious slashes gouged by a carnivore’s razor-sharp claws.

But now, a third of the way into the run, as the predator salivated at the prospect of supper, the spoor suddenly vanishes, replaced by a slab of fresh, smooth rock.

It reappears 10m further on. The hunt has recommenced. But it’s too late. A landslide has left a savage rip across the rock face, interrupting the trail laid down 65-million years ago in Bolivia’s central highlands. To palaeontologists it’s almost an iconoclasm, like a theologian finding a page torn from the Gutenberg Bible.

The lost footsteps of “Johnny Walker”, as the dinosaur is known, are the latest tweak to the prehistoric landscape outside the elegant city of Sucre. Cal Orko is a constantly evolving record of life in the Cretaceous era — an epic canvas that because of erosion and local mining will always be a work in progress.

“It’s just amazing,” says chief guide Maria Teresa Gamon as we inspect the damage. “We see fresh footprints and fossils all the time. We lose some, we find some. It’s always changing.”

Whatever the latest tally, the vast wall of sedimentary rock still bears the largest, most diverse collection of dinosaur tracks on the planet. Across a limestone slab 1.2km long and 80m high, Cal Orko sports more than 5?000 footsteps, with 462 individual trails.

My own trail is slightly longer. Sedate Sucre breaks up the schlep from tropical Santa Cruz to the altiplano mining town of Potosi. With a student population served by great bars and cafés it’s the perfect place to kick back for a few days.

Colourful characters
The Bolivian prints belong to eight main species, including the unpleasant carnotaurus, with its terrible dentistry and laughably tiny upper limbs, and the herbivorous ankylosaurus, a sort of heavyweight armadillo. But they and their footsteps are dwarfed by those of the clumsy plant-guzzling titanosaur, weighing up to 100 tonnes.

Cal Orko lies 5km from downtown Sucre, where red, brown and ochre folds of earth smudge into the Andean foothills. I know it’s inside a quarry — miners spotted many footprints after the first discoveries in 1985 — but it’s still shocking to find heavy industry cheek by jowl with a fragile landscape of world significance. The extraction company’s work covers everything — trees, buildings, men — in a fine fuzz of dust. Its vast lorries are a surreal juxtaposition with the palaeontologists’ delicate work.

The Parque Cretacico, opened in 2006, lies further up the hill, with a museum, vast models of dinosaurs and B-movie roars piped through loudspeakers. So far, so Spielberg. It’s only when I reach the viewing platform, 150m from the rock face, that it starts to become marvellously real — a widescreen view of prehistory.

The footprints of giants
Visitors aren’t normally allowed up to the wall, but with mining temporarily suspended, I’m granted rare access. The immense vertiginous rock face is slightly overwhelming in the dust and searing heat. Gamon, the palaeontologists’ assistant, uses a mirror to transform the sun’s rays into a spotlight, picking out specific tracks.

Her enthusiasm is infectious. “Look! Six footprints going up. Ankylosaurus. And over there! Those are about 80cm in diameter. It’s a titan-osaur coming down the wall for about 25m. See where they stop? That soft outer rock will soon ­crumble and you’ll follow them right to the ground.”

Maria uses the footprints to explain how meat-eaters walked with straight feet whereas “herbivores were pigeon-toed like Charlie Chaplin — apart from the long-necked ones, which had the same hips as carnivores”.

The spoors reveal mundane details of daily Cretaceous life. It’s CSI: Sucre. “That ankylosaur was running. It sank its four toes into the ground, rather than its heel.” There’s even a large carnivore that, as with any true gentleman, preferred the female to stay on its left side.

Cal Orko is about geology as well as palaeontology. Unless dinosaurs wore crampons — and size 72 ones at that — how did they leave tracks up a vertical rock face?

But it was unique climate fluctuations that made the region a palaeontological honey pot. The creatures’ feet sank into the soft shoreline in warm damp weather, leaving marks that were solidified by later periods of drought. Wet weather then returned, sealing the prints below mud and sediment. The wet-dry pattern was repeated seven times, preserving multiple layers of prints. The cherry on the cake was added when tectonic activity pushed the flat ground up to a brilliant viewing angle — as though nature was aware of its tourism potential.

But far from preserving the site, man is adding to the ravages of time. As I leave, a low explosion thumps across the quarry’s fragile earth and reverberates through my chest. More tracks will disappear, more will emerge — the endless dance of conservation and industrial progress. —