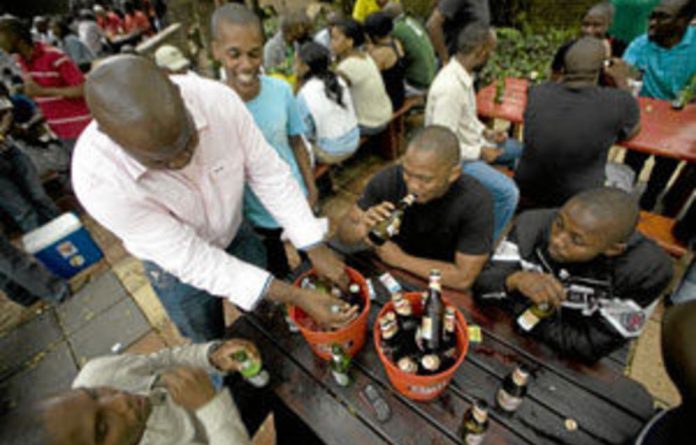 For Bongani, a third year BCom Accounting student, drinking with his fellow students doesn’t begin on a weekend. It does not have a starting point because it does not really stop.

“In the block of seniors that I’m staying at, we drink beers the whole week in residence,” Bongani, who did not want his last name published, said. Drinking at tertiary institutions has come into the spotlight.

Research by CALS (the Centre for Applied Legal Studies) for Soul City has found that drinking is a “serious problem in South African universities” and is said to be higher among new students, as they learn drinking habits during orientation week.

The research stated that although an element of wild behaviour by students was generally tolerated, this often served to conceal very serious problems involving alcohol use and violence on campuses. “These problems need to be taken seriously and addressed and not simply dismissed as “student antics”,” the research noted.

Aadielah Maker, Soul City campaign manager for the Phuza Wize (Drink Wise) Drink Safe Live Safe Campaign, which aims to reduce levels of violence by tackling alcohol abuse, said that 2001 statistics show that among males aged 15 to 35 years, interpersonal violence was the highest cause of death. In 53 percent of fatal and 73 percent of non-fatal cases alcohol was the reason for the violence.

“We have a culture of binge drinking where people drink to get drunk in one sitting. We are not social drinkers, we are binge drinkers and with young people alcohol is one of the rights of passage,” Maker said using year-end matriculant parties and orientation week at universities as examples.

“At orientation week there are often beer gardens. Residence parties are massive alcohol parties. And when first-time students move onto campus, orientation on campus is associated with alcohol,”
Maker said. “If you are newly out of home and you are a first timer on campus, you get introduced to a new culture to which you also want to belong,” Maker said.

And for Bongani drinking has a big social aspect. “Once you start drinking you have many friends drinking with you,” the University of Johannesburg student explained. “I drink whiskey and I drink beer. I drink heavily on weekends but during the week I have about three or four dumpies. I don’t pass out. I just get drunk,” he said.

The research found that male students are more at risk of alcohol abuse than their female counterparts and that there was a lower pass rate among male students, meaning there was a possible connection between alcohol consumption and classroom performance. Despite his heavy drinking Bongani does not think it has affected his studies.

Even though some of his friends think it is the reason for his repeating subjects this year. “No, it is not affecting my studies…you know whenever you are drinking you must be able to say that you are still conscious about your studies,” said Bongani, who is funding his education through a financial loan.

The access to funds for their studies also means that, for some students, it is the first time they have money independent of their families, Maker said.
“Bursaries and scholarship money goes directly to them,” she explained.

Bongani admitted that even though money was tight because it mostly went to his studies, he and his friends always had money to buy beer. “There is always money for beer. At some point you won’t have money but you will find it for beer.”

Maker said that Soul City was not saying that tertiary education students should not be drinking, but there is a need to promote a safer drinking culture as South Africa has a reputation for binge drinking. She said the idea was to look at policy, debates and information campaigns to get students to look at the effects of binge drinking and excessive alcohol consumption.

Soul City has also proposed that tertiary education institutes implement breathalyser testing at weekends, and that lower content alcohol be sold and consumed on campus. Maker said that alcohol outlets within the radius of tertiary institutions also needed to be included in whatever new policy was formulated.

She said bars close to campus were open at 10am, during lecture hours, and later opening times should be looked into. “(We need to look at) how do we bring in regulations that if you are close to a campus that opening hours are at two o’clock in the afternoon,” Maker said.

Currently there is no national policy about alcohol consumption at tertiary education institutions and Soul City recommended that individual institutions look at developing their own alcohol policy.

The Department of Higher Education and Training’s chief of staff, Nqaba Nqandela agreed, noting that many institutions had their own programmes and campaigns in place. He did add that because tertiary institutions and their students were either partially or fully funded from public funds, “there is a direct obligation for the Department to ensure that publicly funded institutions and students do not abuse the public good.”

Rhodes University, which was identified in the research as being the university with the highest alcohol consumption, has an alcohol policy and only one outlet on campus that sells alcohol. The Student Representative Council (SRC) said that if further measures were needed to prevent alcohol abuse, they should be looked into.

“I think the university as a whole, with the support of the SRC, has the instruments or tools to curtail the amount of (alcohol) consumption. Abuse of any kind is detrimental to anyone … we are in support of mechanisms that will curtail any abuse of such things,” Alan Magubane, SRC president said. He said currently the university only had one outlet that sold alcohol.

“It is pretty secure there are bouncers there all the time making sure that the students are safe,” he said. He said that first rigorous debate will have to take place involving all stakeholders before new measures were implemented to regulate alcohol consumption.

The Soul City recommendations called for a zero tolerance policy by all tertiary institutions to incidents of alcohol abuse that inflicts harm on others, particularly where it involves violence.

Nqandela said the department agreed that there should be zero tolerance but added that any disciplinary measures should be rehabilitative rather than punitive. Nqandela said that government was seriously looking at the proposals by Soul City.

“The Department will be willing to play an active role in regards to substance abuse. It is currently studying the report and will make a definitive policy statement on the matter,” Nqandela said.

Case study: The fight for township markets
According to a rare ethnographic participant observer research study conducted by a masters student in industrial sociology from the University of Witwatersrand, two of the biggest alcohol brands in South Africa — SAB Ltd and Brandhouse — compete intensively for customer attention in the Johannesburg township of Soweto through below-the-line tactics.

According to her research, both companies pursue aggressive promotions and competitions to attract market share. The shebeen owners appreciate the promotions, through which customers can receive a wide variety of products provided by the alcohol company (eg music, T-Shirts, key rings, cooler bags etc), because they increase business and the participants — many of whom are poor — presumably enjoy the festivity and free goods.

In 2010, the two companies participated in a highly publicized brawl, with complaints lodged by both Brandhouse and SAB Ltd. toward each other with the ASA. The conflicts arose over bottling and crating issues involving brands oriented towards the market for 750ml beer bottles, which are prevalent in the townships.

These contentious disagreements demonstrate how important low- income consumers are for these companies and is another example of the lengths they will go to in order to compete for this market. — Source: Tsoue 2009

The case for alumni funding

The obvious hurdle is how to deal with economic inequalities among students, while other difficulties are communication without the physical aspects and how to build trust.
Read more
Opinion

Leading others in a time of crisis

Like other sectors, higher education should continue to respond optimally to the coronavirus and map out a new path
Read more
Coronavirus

Our Covid-19 world: how to reintegrate students into universities

Higher education minister expands the allowance for who can be on campus, but numbers cannot be more than a third of the student population
Read more
Advertising
Continue to the category
Politics