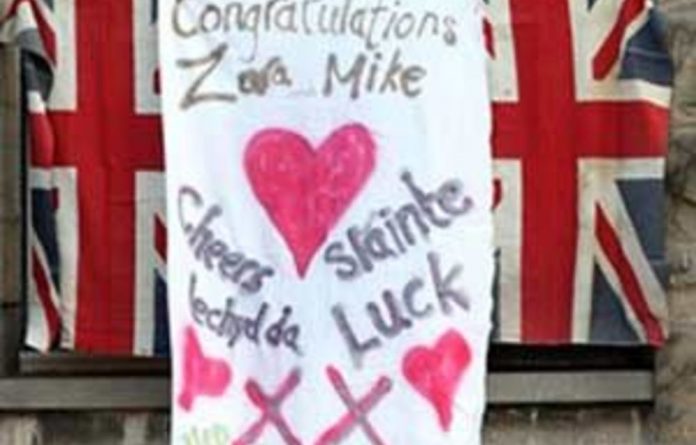 Britain’s second royal wedding of the year takes place on Saturday but the marriage of Queen Elizabeth’s granddaughter Zara Phillips to her rugby player boyfriend will be far removed from the lavish pomp that surrounded the nuptials of her cousin Prince William.

It will be held away from public glare at Canongate Kirk, the parish church of Edinburgh Castle, with a reception at the Palace of Holyroodhouse, the queen’s official residence in Scotland.

“It’s a private family wedding, we’re not giving out any details,” said a Buckingham Palace spokesperson.

The contrast between the two weddings of the queen’s grandchildren could hardly be more different.

William’s marriage to Kate Middleton three months ago grabbed global attention in the weeks beforehand, and royal aides even set up a special website to cope with the massive public interest.

On the day itself, some one million people thronged the streets of London to watch the sumptuous show of pageantry around the wedding at Westminster Abbey while hundreds of millions worldwide watched on TV or online.

However, Phillips has always been considered to be one of the most down to earth members of the royal family, and was considered something of a “royal rebel” when she was younger, even having her tongue pierced as a teenager.

“When we met Zara we noticed she is just so nice and ordinary,” Tindall’s mother Linda told the Daily Mail newspaper.

“Many a time Mike has said if she worked at Tesco [supermarket] at the checkout it would not matter. It’s about her and the sort of person she is.”

Like her mother, who represented Britain in the 1976 Olympics, Phillips has enjoyed a successful horse riding career. In 2006, she won an individual gold on her horse Toytown at the World Equestrian Games in Germany, helped Britain win a team silver and was voted BBC sports personality of the year.

Tindall is also a well-known sportsman — he has played more than 60 times for England and was part of the England team which beat Australia to win rugby union’s World Cup in 2003.

Despite the couple’s attempts to keep their day low-profile, police said they were expecting crowds to gather in Edinburgh.

In addition to most of the royal family, many sports figures are expected to be among the guests, while former England rugby player Iain Balshaw will be the best man.

Tindall’s father told the Daily Mail they had not yet met the queen but had met Zara’s parents as well as Princes William and Harry who are both keen rugby fans.

Just like William, who went back to work four days after his nuptials, Tindall will also not have much time to enjoy married life before he returns to England’s training camp on Sunday, the paper said. — Reuters