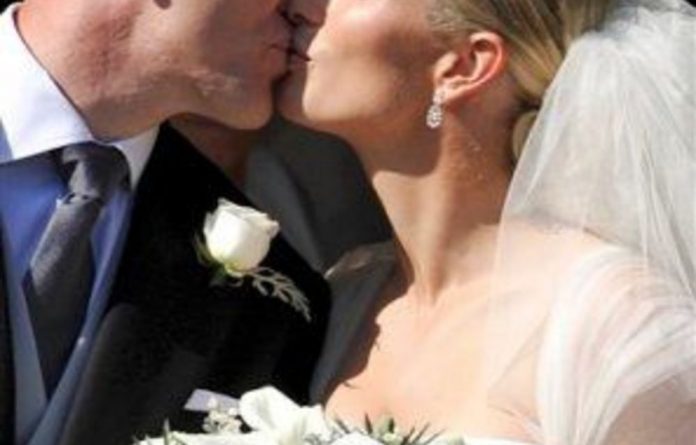 Queen Elizabeth II’s granddaughter Zara Phillips married England rugby star Mike Tindall on Saturday but Britain’s second royal wedding of the year was largely a low-key affair with only a hint of the glamour and excitement of Prince William’s show-stopping nuptials.

Phillips, 30, who is 13th in line to the throne but does not use a royal title, and Tindall, 32, were greeted by hundreds of flag-waving well-wishers and the sound of traditional bagpipes as they arrived for their wedding service at Edinburgh’s Canongate Kirk in a private ceremony.

The often publicity shy bride wore a traditional ivory silk gown and a full length flowing veil but gave only the briefest glimpse to onlookers as she arrived at the central Edinburgh church for a planned 45-minute service.

After a fleeting wave to the crowds, Phillips stepped inside the church as large red doors were firmly closed behind her.

Unlike William and Kate Middleton’s ceremony in April, the wedding service led by Reverend Neil Gardner was not being broadcast on television and crowds gathering in the Scottish city were told by police there would be little for them to see.

A huge cheer erupted as William and Middleton, now known as the Duke and Duchess of Cambridge, arrived to join the congregation, travelling in a sleek black saloon car with Prince Harry.

Middleton, wearing a biscuit coloured coat, dress and angled hat won a warm reception as she waved to well-wishers, as did the queen and Duke of Edinburgh who arrived shortly before the bride.

While the details of Middleton’s wedding gown were a closely guarded secret, Phillips — more commonly seen in jeans or sportswear — made an expected choice, picking Stewart Parvin, a British designer favoured by the queen. She also wore a Greek Key tiara lent to her by mother Princess Anne, and Jimmy Choo shoes.

Known better for her sporting achievements than royal heritage, Phillips is a world class equestrian who is likely to compete in the 2012 Olympics.

Her long time partner Tindall — who Phillips met in 2003 in Australia during England’s triumphant Rugby World Cup campaign — is a leading rugby player who has captained his country. Several of his team mates and coaches joined the celebrations.

While the occasion was far removed from April’s international spectacle at Westminster Abbey, the prospect of a brief glimpse of the royal family was enough to entice hundreds to Scotland, including a few dozen people who camped overnight to win a front row view.

Waving a Canadian flag, Margaret Kittle, 76, said she had travelled from Ontario, Canada, and staked out a spot on Friday night. “I flew over last Saturday and have been here since last night. I started following the royals after I saw George VI and the Queen back home in Canada when I was four-years-old,” she said.

Helen Sutherland, a 65-year-old from Muir of-Ord in the Scottish Highlands, was wrapped in a warm blanket as she waited for a glimpse of Britain’s newest royal couple. “It got chilly through the night but we want to see the bride and her dress. They seem to be a very happy couple,” she said.

Phillips and Tindall hosted a glitzy cocktail party late Friday for relatives and guests aboard the former royal yacht Britannia which they had hired for the occasion.

The party was a rare moment of public glamour for the usually down-to-earth Phillips, who will celebrate with a private wedding reception at the Palace of Holyroodhouse, the queen’s official home in Scotland.

The couple are known for putting their devotion to sport ahead of their celebrity and plan to postpone their honeymoon as both are due to feature in major events next week — the bride in horse trials and the groom in England’s rugby international against Wales. Phillips also plans to continue to use her maiden name when she competes.

Gordhan tells Zondo how Moyane wanted to advance the objectives...

The public enterprises minister is being cross-examined by Tom Moyane’s lawyers at the state capture inquiry, as both men seek to defend their reputations
Read more
Africa

Explosive witness testimony from the International Criminal Tribunal for Rwanda implicates Paul Kagame and the RPF in mass killings before, during and after the 1994 genocide.
Read more
Advertising