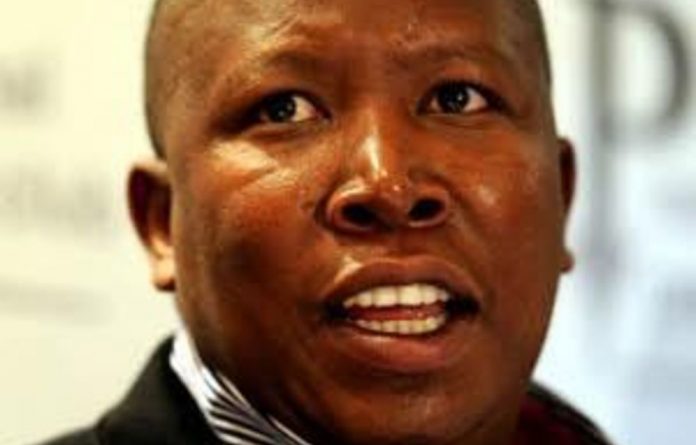 The ANC’s national disciplinary committee chairperson Derek Hanekom confirmed through a statement on Friday that Malema had been charged for “bringing the ANC into disrepute through his utterances and statements on Botswana and sowing divisions in the ranks of the African National Congress”.

The “Young Lions” announced three weeks ago plans to establish a “Botswana command team” to unite the opposition in that country against “the puppet regime” led by President Ian Khama’s Botswana Democratic Party (BDP).

“The BDP-led Botswana is a footstool of imperialism, a security threat to Africa and always under [the] constant puppetry of the United States,” said a youth league NEC declaration.

ANC secretary general Gwede Mantashe retaliated and said the league had undermined the leadership of the ANC with its comments on helping bring about regime change in Botswana.

“Unfortunately, when it comes to the ANC Youth League we have had many incidents that show the desire to undermine the ANC leadership under the pretext [of] not understanding the relationship between the two [ANC and ANCYL],” Mantashe said.

The row between the league and its mother body continued, with Mantashe calling it “defiant” for responding to its first rebuke over Botswana by seeking to “isolate” ANC spokesperson Jackson Mthembu.

Undermining the party
Mantashe said the ANC had informed ANCYL secretary general Sindiso Magaqa that the party would be releasing a statement about the matter before it did so. The ANC would meet the league’s leadership on Monday and discuss why the ANC Youth League opted to then respond to the ANC in public.

He said this “desire” to undermine ANC leaders was publicly displayed by the youth league this week when it announced it wanted to help Botswana opposition parties topple that country’s government.

“Rule 7.4 of the [ANC Youth League] constitution is clear that ‘the youth league will function as an autonomous body within the overall structure of the ANC, of which it will be integral part, with its own constitution, rules and regulations, provided that these shall not be in conflict with the constitution and policies of the ANC’,” Mantashe said.

Managing international relations and implementing conference resolutions was a responsibility of the ANC’s decision-making body, the national executive committee.

“The relations with our neighbours are clearly stated in the Freedom Charter, clause 10: ‘There shall be peace and stability. South Africa shall be a fully independent state which respects the rights and sovereignty of all nations. South Africa shall strive to maintain world peace and the settlement of all international disputes by negotiations, not war.

“‘The people of the protectorates Basutoland [now Lesotho], Bechuanaland [now Botswana] and Swaziland shall be free to decide for themselves their own future. The right of all peoples of Africa to independence and self-government shall be recognised, and shall be the basis of close co-operation,'” he quoted.

According to Mmegi Online the opposition Botswana Movement for Democracy’s chairperson, Nehemiah Modubule, urged more organisations to “come on board and support the opposition partnership advocating for change in Botswana”.

Modubule would discuss with the ANC Youth League what kind of help it could provide.

In May Independent Online reported that Khama described Malema as an “ill-disciplined boy” and said he wondered why action was not taken against him.

The website reported that a faction of Khama’s ruling party befriended Malema on an earlier visit, during which the youth league president told a rally the country needed a stronger leader.

League spokesperson Floyd Shivambu said on Wednesday the league would not discuss in public plans to aid Botswana opposition parties. The league was unaware of Khama’s earlier comments about Malema.

“We are not aware and not interested. We don’t attach value and significance to puppets of imperialism.”

Mmegi Online reported that another opposition party, the Botswana National Front (BNF), did not see anything wrong with the league’s offer, but wanted to “have a close look at the assistance being offered” to examine how it fitted with the party’s programme.

According to the report, BNF youth leader Kagiso Ntime said Malema’s comments followed his own speech at the youth league’s national conference in June.

Ntime had said the Khama administration showed it was a “willing pawn of imperialist forces” because it agreed to host Africom, the United States African Command. — Additional reporting by Sapa