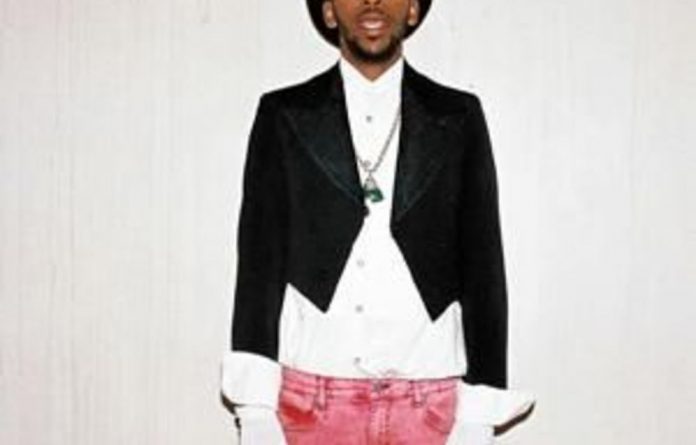 ‘I guess I’m the young prince who’s trying to kill his dad, the king, and take over the kingdom. But I’ve been in exile for a while and now I’m back to take the throne,” said Spoek Mathambo, sitting out on the rooftop outside a recording studio in downtown Johannesburg.

He is here recording his second album, a follow-up to last year’s Mshini Wam, an amalgam of dubstep, house, electro and hip-hop styles. It will be his first album for the United States label Sub Pop, more commonly associated with US indie rock than with Soweto MCs.

Dubbed the “Prince of Township Tech” when he released a series of online mixes of local evolutions of South African house music, Mathambo sees himself as an outsider. His exile, he said, has been a creative one; his second album is the one that will win his crown.

Though his music is grounded in his South African experience, Mathambo reflects an international trend for underground music to be somehow genreless. “It’s 2011,” he said. “I think genres are so dead! I’m influenced by so much: I’m as much rap as I am kwaito as I am a metalhead.”

His words could have come from any aspiring musician in New York or London. South African house music and its indigenous relation, kwaito — the local music Mathambo said he is rediscovering — are a perfect example of how a distinct genre can enter the bloodstream of music worldwide.

Making a mark on popular culture
Since the British label Warp released DJ Mujava’s Township Funk in 2008, South African house and kwaito have become a reference point for producers and DJs in the United Kingdom and the US. It isn’t just an underground thing. By using kwaito (strictly, pantsula) dancers in her video for Run the World (Girls), Beyoncé nods to South Africa’s dance culture. Her hyenas also allude to Pieter Hugo, who directed the video for Mathambo’s single Control.

Beyoncé’s song raised many of the same questions about the appropriation of developing countries’ music, which Paul Simon faced a quarter of a century ago when he went to South Africa to record Graceland. When a major star enjoys a huge success by employing the sounds of another culture, do the musicians of the source music really benefit?

Mathambo is steering clear of those anxieties.

“Being a kid from here, you grow up always looking up to foreign music. I never really respected what was happening in South Africa. And then with dance stuff as well. Until realising how South African house and kwaito is some of the best house in the world. Track for track, it’s badass.” Not only was his love of “international” music common among young South Africans, but kwaito was a product of that love — it was born when two house DJs in Johannesburg, Oskido and Christos, slowed down some house and other records to a tempo of around 110 beats per minute (bpm). Oskido and Christos founded the Kalawa Jazmee label in 1992.

“I saw at that time a lot of Chicago DJs like Frankie Knuckles, Louie Vega, Marshall Jefferson, were remixing stuff,” Oskido said. “That’s when the idea of kwaito came through for me. And after we slowed down the beats we started thinking: ‘Why can’t we put our own lyrics on it? Why can’t we write? We are free now!”

Tired of the politics
From its cobbled-together beginnings, kwaito quickly grew into a South African youth movement that seemed apolitical. As Oskido put it: “After the release of Nelson Mandela we were tired of singing these political songs. I think we just came up with this idea of talking about things in a way that can relay the message via a dance culture.”

Mandela himself noticed the trend. According to Phindile George, manager of kwaito group Ruffest, a dialogue took place between the early kwaito artists and Mandela after he expressed his disquiet about some kwaito songs.

He said the songs in question included Arthur’s song Kaffir — an address to a white boss by a domestic worker — and Boom Shaka’s revamp of the national anthem. Oskido’s act, BOP (Brothers of Peace), also had a hit song about traffic cops who arrested black people in nice cars, believing they had stolen them.

Oskido said that in 1996 he was invited to a meeting with Mandela, organised by the ANC Youth League: “He encouraged us, like, ‘Listen, we need to do more positive things on the music,’ because he could see that it was becoming bigger and bigger.” The ANC, he said, helped kwaito artists by taking them to political rallies where audiences would buy their music after a show.

Kwaito’s grassroots economy — Oskido talked about selling his own cassettes from the boots of cars – made it the music of a newly empowered generation, and though kwaito came from the townships, artists like Mandoza soon crossed racial barriers. At their sales peak Oskido’s Church Grooves compilations would sell “up to 200?000 copies”. Kwaito’s content may have been apolitical, but as a movement it embodied emancipation. As Mathambo put it: “Young black people could start doing whatever they wanted — and they did.”

A dying trend?
These days some argue kwaito is dead. One reason for its apparent decline is that “international” house music became more and more popular in South Africa. (DJ Clock believes this was partly owed to the Africanism movement led by global house producers such as Osunlade and DJ Gregory, and in South Africa by the likes of Black Coffee.) Kwaito producers found their music would be played more often if house DJs could use it in their sets, so they sped up the tempo again.

DJ Clock produces a slick, clipped style of the new kwaito. “People think that because it’s 125bpm, it’s no longer kwaito now, it’s house, which it’s not!” he said. “I mean, if you can check now — Black Eyed Peas, they used to go at 95bpm, at the time they started their group, but now if you listen they’re all 130bpm, 135bpm; they’re following the fast house … But when you listen to Black Eyed Peas it’s still Black Eyed Peas!”

Clock said the lyrics are more important now, as shown by the music of Mathambo’s friend, Okmalumkoolkat, an MC and dancer who has an underground hit with London act LV. In Durban — which has stolen the kwaito crown from Johannesburg — a further evolution has taken place in clubbing after-parties, or “morning bangs” (“banging” means being high on ecstasy), where people chant to the music. Okmalumkoolkat translates one chant from Zulu: “I was dreaming I was banging, and I was banging so high I was in the clouds and there was a small radio.”

Although kwaito’s main language was initially tsotsitaal, it is now performed in nearly all of South Africa’s languages and dialects. For Ruffest, new stars of Cape Town kwaito, the choice of language is crucial — in the townships around Cape Town, not everyone speaks English, and George said they would be considered bourgeois if they used it too much. But they will use some English to go “beyond even South Africa”.

But, for Mathambo, South African language defines kwaito. “I don’t really know if kwaito can be in English. That’s kind of an important factor.” On the other hand, he said, you could slow down Tchaikovsky, chant over it in a South African language, and it would be kwaito. From its borrowed “international” origins, kwaito rose from the end of young South Africans’ exile in their own land. If Mathambo returns to the township, and young South Africans like Clock and Ruffest continue to change kwaito, their music’s formal differences might become harder to grasp. And they can all claim the crown of once-dispossessed kings. —