All Blacks get reminder of World Cup nightmare 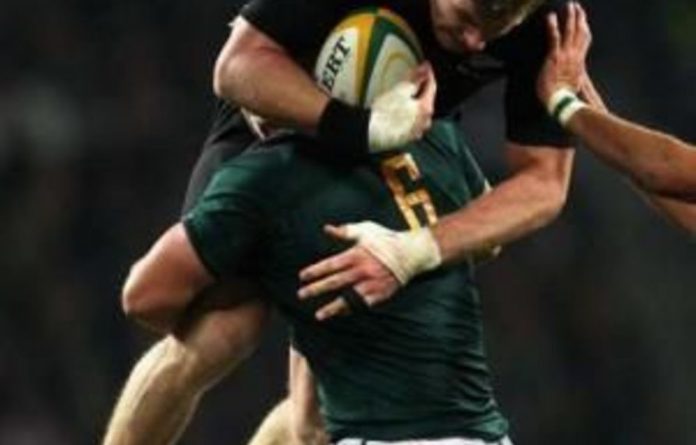 New Zealand coach Graham Henry remained convinced his team were on the right track despite being given a reminder of a recurring Rugby World Cup nightmare when a second-string side were beaten 18-5 by South Africa in a Tri-Nations Test at Nelson Mandela Bay Stadium this weekend.

The All Blacks played most of the attacking rugby Saturday but struggled to break down a ferocious Springbok defense and were kicked to defeat by South African fly-half Morne Steyn, who landed five penalties and a drop goal.

New Zealand, who host next month’s world cup, have not won rugby union’s biggest prize since the inaugural event — also in New Zealand — in 1987. Since then their expansive style of play has fallen short despite the All Blacks being regarded by most pundits as the world’s leading team.

By contrast, South Africa has twice won the World Cup and on both occasions did so without scoring a try in the final, including a 15-12 extra-time victory against New Zealand in 1995. It has become a common mantra that solid defence wins world cups.

Henry paid tribute to South Africa’s scrambling defence and physicality but implied that the result might have been different if some of his team’s established stars had been in action. Nine leading All Blacks stayed at home to rest ahead of the world cup.

Asked by a journalist whether the All Blacks were playing the right style of rugby to win a world cup, Henry responded, “The game that we are playing has got distinct possibilities”.

He said, “We created a lot of opportunities to do the business. There were two blue-chip opportunities in the first 20 minutes where we were five metres short or one more pass may have created a different situation at the end of the game.

“There are one or two other guys coming in with a lot more experience who may have settled it down and turned those opportunities into points.”

‘Needed to settle down’
New Zealand could only cross the South African line once, when centre Richard Kahui scored a first-half try.

“We were a bit frenetic at times,” said Henry. “We played the game at high pace and probably needed to settle it down a bit. We had a lot of young guys who hadn’t played a lot of Test matches. When they’ve played a few more Test matches or have older heads around them we would be a bit more settled.”

It was an encouraging win for the Springboks, who have tried to keep the core of their 2007 world cup-winning squad together. Eleven of the players who were involved Saturday were in the match 22 for the 2007 final when South Africa beat England 15-6 in Paris.

South African coach Peter de Villiers said the Springboks had shown their character — as well as performing the basics of scrumming, line-out work, kick-offs and defence.

He shrugged off concern that the Springboks had not scored a try in two successive home Tri-Nations matches.

“There are no bonus points in World Cups. I am confident this team can reach its goal.”

South Africa played the first hour of the match without regular captain John Smit, with lock Victor Matfield leading the side and Bismarck du Plessis having a storming game as hooker in Smit’s place.

De Villiers said he saw having two strong captains as a positive. “I trust both of them. I know their abilities and I know how they can read a game. Both of them are technically and tactically very sound. I think we are in a better position than we were a few years back.”