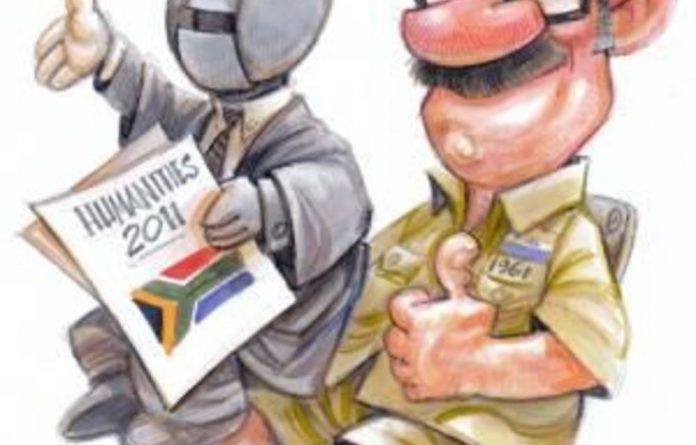 Contemporary defences of the humanities and social sciences generally downplay the need for self-reflection.

We consistently neglect how academic disciplines not only constrain but also enable and constitute the desires of human subjectivity, often to keep the human subject locked in racial formations. We continue to remain unaware of how humanities and social science research was bound up with the racial formation of disciplinary power and reason in South Africa. Even when expressly opposed to the repressive apparatus of the state, the human sciences at times functioned unwittingly to secure the contract between the university and state power.

What is called for in our times is not an uncritical defence of the humanities but a careful consideration of the work that the humanities have performed historically in relation to the demands of a racial state in defining people into categories. Such a move would likely demand a more systematic unravelling of the way disciplines within the humanities have created the desire for knowledge and the conditions for curiosity.

To this end we might consider the possibilities that ensue from what can be called a “subversive genealogy” of humanistic study in South Africa. Such a genealogy, which is aimed at forging a reconstituted concept of the humanities beyond a tradition that must also be cultivated, has two specific instances.

In the first a subversive genealogy may trace the sources of humanistic study in the deliberations surrounding the so-called “native question” in the first half of the 20th century with the founding of “Bantu studies” in the liberal university.

The native question was a response to the quagmire facing the South African state intent on reorienting and recasting the meaning of black subjectivity. Caught between a discourse on vanishing cultures and the story of progress, academic disciplines performed the role of trusteeship over the category of the native, which appeared resolutely bound to administrative decree and capitalist demand.

Here the compulsion to answer the state-sponsored native question resulted in considerable disciplinary reorientation, but one equally constrained by the demands of a segregationist state. Thus my claim to an unwritten contract at times, in the name of the humanities and social sciences, between the state and the university.

The native question aligned knowledge projects with the demands of administering native populations. The Milner Commission of Inquiry (1903 to 1905) was perhaps the first to call for scientific studies of natives of South Africa. The call for the study of the natives had several consequences, not least that the study of human subjects would be indispensable to the modes of government in these far reaches of the empire.

The connection of knowledge with the exercise of power may be gleaned in the formation in 1921 of the school of African life and languages at the University of Cape Town, which announced that “the establishment of the school now provides the necessary correlation between university work and preparation for native administration”.

By 1929 there were steady streams of funds from the Carnegie Corporation in the United States and the Smuts government to support the study of the native problem. The sequence of the call of the state, the response of the university and the funding of the enterprise is a characteristic feature of the unwritten contract.

Not all scholars were necessarily formed by the debate on the native question. For some, the question of black subjectivity was increasingly one that needed to be theorised, even contemplated at the limit of scientific and philosophical approaches to human subjectivity.

Take the example of Dr Silas Modiri Molema, speaking at the African Races Association meeting in Glasgow in 1917, in the presence of WEB du Bois.

Reflecting on the Possibility and Impossibility of the Improvement of the Black Man, Molema explained discrepant views of progress held by philosophers and scientists. While the latter held to linear conceptions of time, philosophers understood the meandering nature of change over time. In philosophy the condition of black subjectivity posited a problem that challenged the scientific pretensions of the disciplines of modernity, but also the concept of progress that had accompanied the rise of the native question.

But while Molema travelled to Glasgow to address a conference of scholars over which he presided, in South Africa his discourses migrated to those disciplines earmarked as “native studies”. Molema was merely rendered by his contemporaries as a man of modernity, preparing the ground for a resistant nationalism mobilised by the passage of the 1913 Land Act. His ruminations were not to be perceived as a theory of the subject, but were restricted to the terms of the native question. Molema’s book was reduced to nothing more than a simple restatement of native customs and native life, as a supplement to Bantu studies.

The native question activated the inclusion of black subjectivity into academic discourse, mediated by a statist formulation of control. While writers like Molema and John Henderson Soga wrote against the modes of evidence of the colonial archive, they were being taken up in the orders of disciplinary reason as exemplary subjects of modernity’s making.

Colonial foundations
Locked in a discourse on Bantu studies, the writing of “nationalist intellectuals” was rendered stable and secure, unable to call into question the very colonial foundations of the disciplines that defined the rise of the university in South Africa. The native question rendered the subject legible, but only as a subject of disciplinary reason and ultimately disciplinary power.

If the native question produced a disciplinary settlement of the ideas of restless natives in the first instance, the Extension of Universities Act of 1959 and the creation of racially and ethnically exclusive institutions produced a second instance of turmoil for humanistic study.

Under apartheid instrumental reason marshalled rationality in the service of racial classification and separate development. However, this was not merely a continuation of the native question, which sought to understand the black subject in a modernising narrative, but a mechanism for intensifying the control of that subject of capitalist modernity through a project of creating racialised and ethnically differentiated institutions.

This critique of apartheid that took hold at many institutions of higher learning, however, neglected to ask how humanistic study extended, rather than displaced, the definitions of race. The target of criticism was largely framed in terms of instrumental reason: critics objected to Verwoerd’s desire to limit education to the “skilling” or “equipping” of black populations for menial labour.

The newly established black universities were invoked in critiques of racial segregation and apartheid as merely exemplary of this pernicious state instrumentalism. The historian CW de Kiewiet, on a visit to the United States in 1960, echoed the irony that the establishment of black universities created conditions for resistance and the promise of a new generation of less tractable leaders.

Institutions of repression, not thought
Read as such, black colleges both in South Africa and the United States were increasingly construed as institutions of repression and resistance, not thought. In an essay titled Herrenvolkism and South African Higher Education in the same year, AC Jordan described a situation of siege at Fort Hare University, with security branch and military occupations, and the impossibility of working under such conditions.

Amid the groundswell of resistance in the 1970s, the students who instigated the movements across South Africa similarly tended to frame their critique in the limiting terms of the instrumental reason of the state. From perspectives of the liberal university, the black universities were merely symptoms of apartheid, nothing more.

The reckoning with the apartheid state’s new institutional arrangements diminished the history of race in the disciplines of the humanities. It also neglected understanding how race was being figured through a mode of disciplinary reason at the institutional site of the black university. In their “own affairs” apartheid raison d’être, the newly established racial and ethnic universities often justified their existence by staking out a sphere of research about “community” that mostly extended the unwritten contract between the university and the state. And with it came not only a racialised conception of the human subject as “normal”, but also one that was kept in its place.

Professor Premesh Lalu is director of the Centre for Humanities Research at the University of the Western Cape and author of The Deaths of Hintsa: Post-apartheid South Africa and the Shape of Recurring Pasts (HSRC Press, 2009)