Who is in the running for medals at the Worlds? 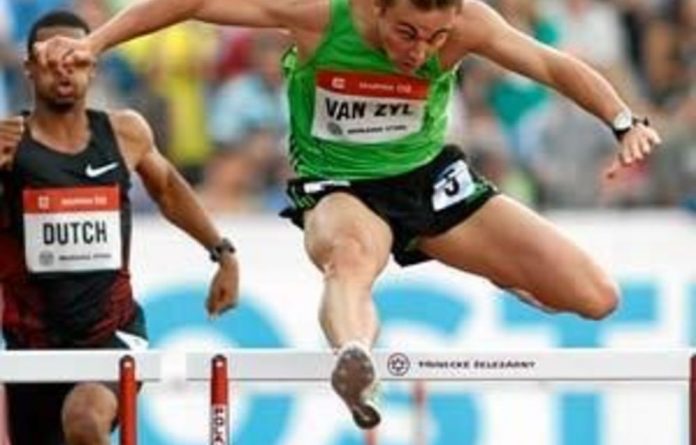 Four hundred-metre hurdler LJ van Zyl will lead the South African medal charge at the World Athletics Championships, which gets under way in Daegu, South Korea, on Friday.

The 26-year-old is ranked number one in the world, having produced the year’s four fastest times, including his two best efforts of 47.66 seconds — a national record — in both Pretoria and Ostrava in the Czech Republic. But all four times were run in the first six months of the year and, even though the Van Zyl camp may argue that he has tapered off in preparation for the World Championships, he has struggled to match those times in his past few outings.

The approach may have something to do with his previous World Championships experience, in Berlin two years ago. On that occasion Van Zyl went into the event with the year’s fastest time, but faded in the semifinals.

Both fatigue and a hamstring niggle have been cited as reasons for Van Zyl’s slower times in recent months but perhaps more worrying is the fact that his competitors for gold in Daegu appear to be peaking at the right time.

Perhaps the outsider in Van Zyl’s event is fellow South African Cornel Fredericks. The 21-year-old ran 48.14 seconds in April, the 11th-fastest time of 2011, and with little focus on him may just surprise the “big four”.

Underdog
Van Zyl may have the times this year but, in terms of pedigree, long jumper Khotso Mokoena is the man to watch in the South African team. The 2008 Beijing Olympic silver medallist has had a poor 2011, producing only the 22nd-ranked jump this year — an effort of 8.25m.

In fact, the man who won silver in Berlin two years ago is actually ranked behind compatriot Luvo Manyonga, who jumped 8.26m in Finland in July. Australia’s Mitchell Watt appears the man to beat, with the four biggest jumps of the year, and reigning Olympic and former world champion Irving Saladino is also in the mix. But none of that bothers Mokoena.

“I am once again the underdog and I thrive on being the underdog. My coach, Hansie Coetzee, is coming along [to Daegu]. I had some problems with my run-up in the last two meetings, which is why having Hansie there will be a great help. But I am in great shape and really looking forward to the championships,” he said before the team’s departure from Johannesburg.

Mokoena may be hungry for gold but he sits in that category of athletes with an outside chance of winning a title.

You could probably “throw” javelin star Sunette Viljoen into that pot as well, although she’ll probably argue that she’s in good form, having retained her World Student title in China last week with a throw of 66.47m, which was the seventh-best effort of 2011, placing her fourth in the world.

The other outsider for a title is fellow javelin thrower Robert Oosthuizen. He’s only ranked 15th in the world but has the ability to go far in Daegu — although he may have to count on the vagaries of javelin competition and a few of the big names having an off day.

Inspiration
Two other South Africans — reigning women’s 800m world champion Caster Semenya and Paralympic athlete Oscar Pistorius — are in the spotlight for different reasons. Semenya has no form to speak of, running the 20th-fastest time of the year in June, nearly two seconds slower than Mariya Savinova’s world-leading time of 1:56:95.

Semenya, who shot to stardom and infamy by winning the title in Berlin two years ago in a time of 1:55:45, hasn’t endeared herself to the South African media of late, refusing to answer questions on the team’s departure and preferring instead to issue a terse statement through her public relations company.

Pistorius, who is usually at the other end of the scale in terms of media friendliness, is in the team for both the 400m and 4 x 400m relay, after achieving the A qualifying standard by running a personal best of 45.07 seconds in Italy in July. He becomes the first amputee athlete to compete in the able-bodied World Championships and he won’t be expected to win a medal. His achievement is his presence in South Korea.

Reigning men’s 800m world champion Mbulaeni Mulaudzi will miss the championships because of injury, and 11 members of the 25-athlete South African team will be making their first appearance at a World Championships. So experience is not on their side.

“We are very clearly looking to 2012 and beyond,” said Athletics South Africa president James Evans. “It is exciting to see this kind of talent at our disposal for the next four years and, with an average age of 24 years, this is quite healthy.”

Athletics fans back home will be crossing fingers and holding thumbs for a few surprise results in Daegu.