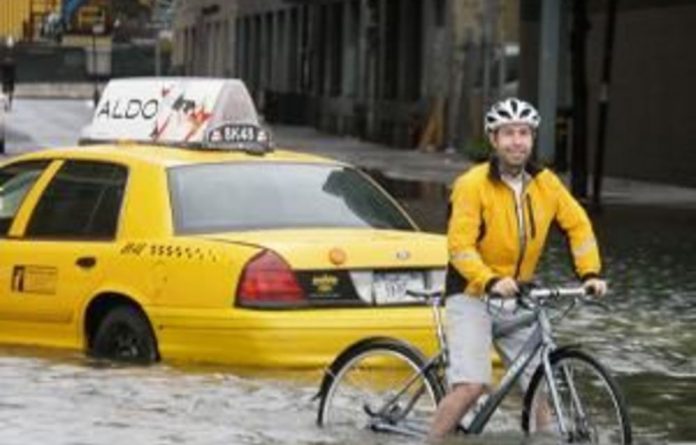 Hurricane Irene swept through Manhattan on Sunday but reserved the worst of its fury for towns and suburbs up and down the north-eastern United States where driving rain and flood tides inundated homes and cut power to millions.

On its march up the East Coast over the weekend, the storm killed at least 20 people, left about five million homes and businesses without electricity, caused widespread flooding and downed thousands of trees. Suburban New Jersey and rural Vermont were hit particularly hard.

Irene forced the closure of New York’s mass transit system, which will crawl back to service on Monday starting at 6am (10am GMT), and the cancellation of thousands of flights, some of which would resume on Monday. Most of the commuter rail service bringing commuters from the suburbs to New York City would remain suspended.

President Barack Obama warned the region’s problems were far from over. “Many Americans are still at risk of power outages and flooding which could get worse in the coming days as rivers swell past their banks,” Obama said, promising federal government help for recovery efforts.

By late on Sunday afternoon, Irene was bringing tropical storm conditions to the six states of New England. Irene was still a tropical storm, packing winds of 80km/h as it approached Canada, the US National Hurricane Centre said.

It wasn’t immediately clear how much Irene would cost but in New Jersey alone the damage was expected in “the billions of dollars”, Governor Chris Christie told NBC’s Meet the Press.

With many thousands of homeowners in the region suffering flooding there will be many questions over whether insurance policies offer cover and whether the federal government’s flood programme can handle the claims, especially at a time of austerity in Washington and in cash-strapped states.

New York City’s 8.5-million people are not used to hurricanes and the city is plagued by aging infrastructure, leading many to issue dire warnings in recent days about what the hurricane could bring.

Authorities took unprecedented steps to prepare, including mandatory evacuations and a total shutdown of mass transit systems that will have had a major economic impact.

About 370 000 city residents who had been ordered to leave their homes were told they could return on Sunday afternoon.

Most bridges, tunnels, subways and city buses will be functioning normally, but the Metro-North and Long Island Rail Road commuter rail would remain suspended, stranding commuters who travel to Manhattan from suburbs to the north and east.

Rail service from New Jersey, home to hundreds of thousands of people who travel into New York each day, was still out, although limited bus services were expected to resume.

It all means that many who normally commute into Manhattan and elsewhere in the region will find it very difficult to get to work on Monday, though financial markets were expected to open as normal, albeit with reduced volume.

“All in all we are in pretty good shape,” Mayor Michael Bloomberg said, adding that while it would be a “tough commute” on Monday there had been no long-term damage to the subway system.

Bloomberg said there were no reports of deaths or injuries in the city, though there were some close calls. In Staten Island, firefighters with boats rescued more than 60 people including three babies from 21 homes flooded with 1.5m of water.

While it weakened before it hit New York, the swirling storm still packed a wallop, especially in districts such as the Rockaways peninsula, a low-lying strip of land exposed to the Atlantic Ocean on the south-eastern flank of the city.

Authorities closed three bridges leading to the peninsula before the storm.

“It was like being in the hull of a ship,” said Patricia Keane (42) who stayed in her Rockaway home and lost power but then used backup generators to supply electricity to herself and four neighbours, who all had flooded basements.

New Jersey slammed
New Jersey was hard hit by flooding, downed trees and power failures. More than 100 dams in the state were being monitored for spills from high water, and one downstream town, High Bridge, was evacuated, Christie said.

Four people were killed in Pennsylvania from the effects of Hurricane Irene, including two men killed by falling trees, a state official said. That raised the US total to 20 dead in addition to three who were killed in the Dominican Republic and one in Puerto Rico when the storm was still in the Caribbean.

Virginia Governor Bob McDonnell, whose state was hit earlier by the Hurricane, told CNN “We prepared for the worst but came out a little better than expected. Unfortunately now, four fatalities have been confirmed.”

“We’ve got some significant damage in some areas, from flooding, from wind, a lot of trees down, 2.5-million people or more without power in Virginia, that’s the second largest outage in history,” he said.

In North Carolina, where authorities confirmed at least six storm-related deaths since the hurricane made landfall on Saturday, Governor Bev Perdue was expected to request a federal disaster declaration.

The storm dumped up to 20cm of rain on the Washington region, but the capital avoided major damage.

As the storm moved north on Sunday, New England officials reported flooded roadways, trees downed over rail tracks and evacuations in some towns.

The storm zone stretched from Massachusetts’ eastern islands of Martha’s Vineyard and Nantucket to the western Berkshires mountain range, where authorities braced for dam failures because of the heavy rains.

Relief
In Manhattan, where massive flooding in the financial district surrounding Wall Street was feared, there was 30cm of water in the streets at the South Street Seaport in Lower Manhattan before the tide began receding at mid-morning.

Jeremy Corley, a 32-year-old web manager, was out in shorts and a rain jacket at the Seaport on Sunday morning. “I was watching the news on TV and they were way over-exaggerating how bad it is so I wanted to go outside and check it out.”

Nearby, a man was walking two dogs through water that came up to the bellies of his pets. Further north, a man was seen kayaking in the street, though the water was not very deep and a cyclist was able to make his way along the same street.

Wall Street seemed largely unaffected as did Ground Zero, where the 10th anniversary of the September 11 attacks is soon to be observed.

The impact was felt harder on Long Island. The waves at Long Beach, which faces the Atlantic Ocean, crested over the boardwalk and on to the streets, taking with them a two-storey life-guard station.

After Irene, weather watchers were keeping an eye on Tropical Storm Jose, which formed near Bermuda.

This year has been one of the most extreme for weather in US history, with $35-billion in losses so far from floods, tornadoes and heat waves. – Reuters

Parts of the provincial ANC will target their former premier, Magashule, and the Free State PEC in a rolling mass action campaign
Read more
Politics