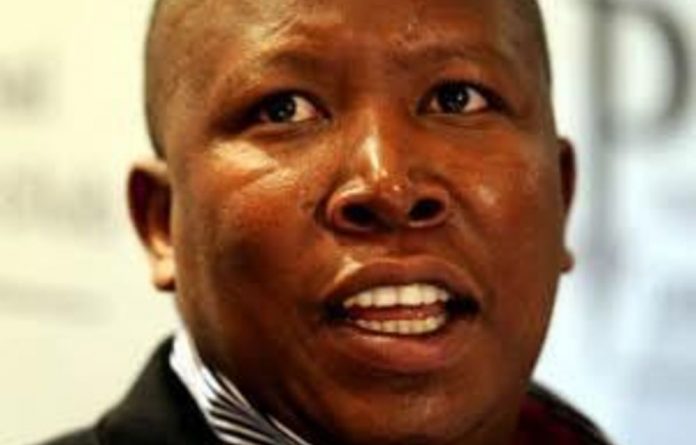 A Mail & Guardian reporter on the scene said protesters had broken through barricades and were pelting police and journalists with glass bottles and stones.

Police had fired a warning shot, and turned a water cannon on the protesters. Police officers had also sprayed protesters with mace.

Malema’s supporters could be seen burning ANC flags and T-shirts and by 10am were metres away from the entrance to Luthuli House. Those inside the building had lowered a metal roll-down door over the entrance. Two police officers were injured in the protest — one appeared to have injured his arm, while another had a bloody face.

Three black BMWs, escorted by metro police, arrived at Luthuli House at about 10.30am to loud cheering from the crowds.

People started shouting “Juju, Juju!” but it was not clear if the leader was actually in one of the cars.

Soon after the arrival of the BMWs, youth league supporters again started throwing broken bricks at police and journalists.

“Malema is our brother,” read a placard being held up by one of Malema’s supporters.

Several streets were closed while groups of supporters, whistling and blowing vuvuzelas, ran up and down, signalling to motorists to stop and make U-turns.

One of the supporters told a South African Press Association reporter they were running around to show the police they were not scared of them, and that they would force their way into Luthuli House if the disciplinary hearing went against Malema and his co-accused.

“Juju, we are with you,” stated another placard that was being waved around.

Beyers Naude square, where portable toilets had been set up, was strewn with litter following a night vigil.

A helicopter hovered over the crowds while police would not allow anyone near Luthuli House.

The charges include bringing the ANC into disrepute and sowing divisions in ANC ranks.

Malema recently said the ANCYL would send a team to Botswana to consolidate local opposition parties and help bring about regime change, as it believed the government there was “in full co-operation with imperialists” and was undermining the “African agenda”.

Initially only Malema and Shivambu were charged, but the four other leaders’ names were added to the charge sheet last week.

The league was reportedly hoping to argue in Malema’s defence that he was communicating a resolution of the ANCYL national executive committee and therefore the entire body should be charged, not just the president.

The national disciplinary committee at the time said that should Malema be found guilty of provoking serious divisions or a break-down of unity in the organisation within the next two years, his membership of the ANC would be suspended. – Sapa