Norway to speak for SA as Zuma boycotts Libya meeting 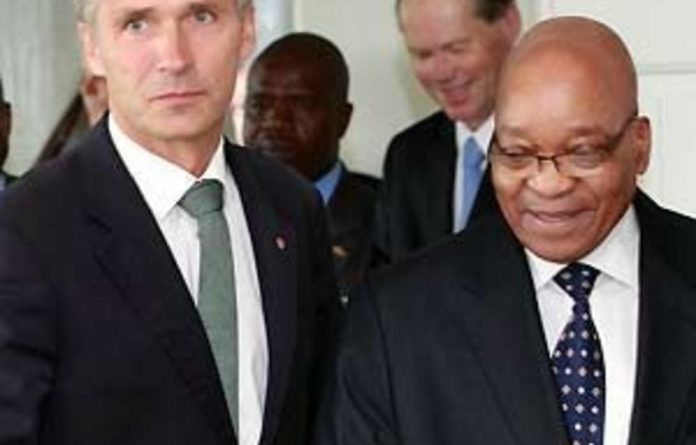 South Africa and Norway came closer to mending the gap between the two countries on their different stances on Libya, with Norwegian Prime Minister Jens Stoltenberg undertaking to carry the South African and the African Union (AU) message to a meeting of world leaders in Paris on how to restore normality to Libya.

President Jacob Zuma, who is on a state visit to Norway, turned down an invite to Paris, where French President Nicholas Sarkozy is hosting the meeting to discuss Libya’s future from Thursday.

In a strictly managed press conference in the Norwegian capital of Oslo on Thursday morning, Zuma told journalists that South Africa and Norway were “finding each other” on Libya.

“We are coming together on what should happen,” he said. “In Libya, because of its unique circumstances, we’re calling for an inclusive government. We agree on that but we also agree that that process must not be taken away from the UN [United Nations]. It is a UN process and the AU must support it,’ said Zuma.

Boycott
He declined an invitation to the Paris meeting mainly because of South Africa’s unhappiness with the Nato bombings in the country. Without naming the countries, but generally understood to be referring to France and Britain, who led the military strikes, Zuma blamed leaders of the West for not respecting the AU’s road map on Libya. The AU had already taken its resolution for a peaceful solution when the UN followed with its own, disregarding the African leaders’ process, he said. Even then, South Africa cooperated.

“When the Libyan question emerged we were all together, we were part of the UN resolution, but that resolution was interpreted differently. We had individual countries, too many people, taking over the process”.

“Now that the NTC [the rebel’s national transitional council] has taken over a large part of Libya, the UN must take the process. We can’t have individual countries taking over the process,” said Zuma.

The bombing of Libya did not tally with the requirements of the UN’s resolution to protect civilians, Zuma said. “If any measure of military would be used, it was to help to protect expats, as we understood it. Instead of protecting people it became the bombing [and] a cover for the other group [the rebels] to advance”.

Libya’s rebels succeeded in taking over much of Libya largely because of a backing by Nato air strikes. On their own, the situation could have been different for the NTC.

Norway seemed convinced. Stoltenberg told the media that Zuma’s views were “interesting” because he was “so close to developments in Libya and Africa”.

Stoltenberg agreed that the military intervention in Libya created unnecessary tension and blocked the way for what could have been a peaceful settlement, but the Norwegian Prime Minister expressed a wish to bury the hatchet on the matter.

“The use of military force is always controversial, but now is not the time to discuss what could have happened if we did things differently. It is time to move on. That is the only way we can help build a democratic country that can respect human rights,” said Stoltenberg, who encouraged cooperation between the UN and the AU.

Delegates from 60 countries are taking part in the Libyan talks in Paris, with the world eager to hear the NTC’s plans for the north African country and if the rebel group can live up to the expectations of a new democratic Libya that respects human rights. The NTC expressed its wish to hold elections within 18 months.

Zuma is leading a delegation of government ministers and about 50 business representatives on a state visit to Norway that seeks to strengthen trade relations with one of Europe’s smaller, but wealthy nations.