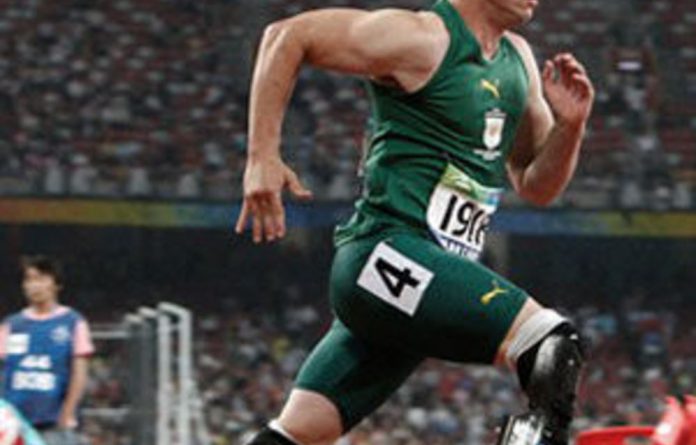 Double amputee Oscar Pistorius led off his 4 x 400m relay team at the World Championships on Thursday and was “extremely proud” to help South Africa qualify for the final with a new national record.

Pistorius, who runs with carbon fibre prosthetic blades in place of his lower legs, had been ordered to take the first leg by the IAAF to “avoid danger to other athletes”.

The Blade Runner finished eighth in his semifinal of the men’s 400m on Monday.

But the 24-year-old delivered the baton smoothly to team mate Ofentse Mogawane on Thursday before Willem de Beer and Shane Victor brought South Africa home in third place behind the United States and Jamaica in the first heat.

“It is unbelievable to be one of four names on a list to run a national record,” he said jubilantly. “I’m extremely proud. To make the final makes me even more happy.”

No problem
The South African’s battle to overcome a series of legal and performance obstacles and become the first amputee to run at a major championships on his prosthetic limbs has made him a crowd favourite in South Korea.

American LaShawn Merritt, who ran the anchor leg for his team, said he had no problem with Pistorius being allowed to compete at the World Championships.

“Not at all,” he said. “After I go back and change I will congratulate him.”

Pistorius first competed against able-bodied athletes in 2007 but the International Association of Athletics Federations (IAAF) then amended its rules to ban the use of “any technical device that incorporates springs, wheels or any other element that provides a user with an advantage over another athlete not using such a device”.

In the following year, the world governing body said scientific research had shown he enjoyed an advantage over able-bodied athletes and banned him from competitions held under their rules.

However, the decision was over-ruled by the Court of Arbitration for Sport (CAS), making Pistorius eligible for the 2008 Beijing Olympics although he was unable to qualify for the South African team, winning gold medals instead in the Paralympic 100m, 200m and 400m.

IAAF head Lamine Diack had said last week that Pistorius was a “particular case” and that he must run the first leg if he wanted to take part in the relay.

“The only thing we said to the South African federation is that if he wants to run in the relay, he must run the first leg to avoid danger to other athletes,” he said. — Reuters, Sapa