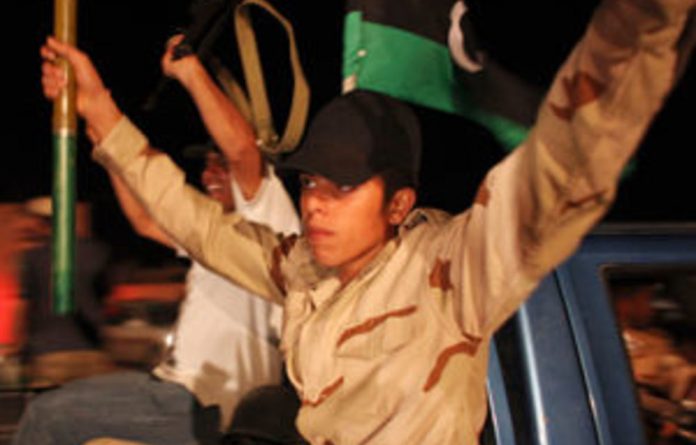 Libya’s new rulers sent a column of extra fighters towards the tribal bastion of Bani Walid overnight, preparing a showdown with supporters of ousted leader Muammar Gaddafi, possibly including his sons or even Gaddafi himself.

Gaddafi, in a call to a Syrian-owned TV station on Thursday, vowed continued resistance to the rebels and Nato and said a military convoy that entered neighbouring Niger this week, fuelling speculation he might be about to flee, was “not the first”.

“Columns of convoys drive into and out of Niger carrying goods and people inside and outside [of Libya] say Gaddafi is going to Niger,” he said in the call that Arrai TV reported was made from within Libya.

“This is not the first time that convoys drive in and out of Niger.”

Gaddafi’s whereabouts have been a mystery since rebel fighters stormed his Tripoli headquarters two weeks ago. Bani Walid, one of the few towns still in the hands of his followers, has refused to surrender despite a stand-off lasting days.

Officials from the interim ruling National Transitional Council said they had sent reinforcements after reports that Gaddafi had issued a call for the town to fight.

“We will move into Bani Walid slowly. There was a message in Bani Walid from Gaddafi this evening,” NTC unit commander Jamal Gourji said.

“He was rallying his troops and calling on people to fight. He is hiding in a hole in the ground, like Iraq,” he said, in a reference to late Iraqi leader Saddam Hussein, captured hiding in a hole nine months after he was toppled in 2003.

Outside the town on Wednesday residents leaving through a sun-scorched NTC checkpoint at the nearby settlement of Wishtata painted an increasingly desperate picture.

“People are terrorised,” said Salah Ali (39). “But many still support Gaddafi because they were paid by the regime, because many have committed crimes and are afraid of arrest.”

Aid agencies have raised concerns about humanitarian conditions there and in the few other cities still under control of Gaddafi loyalists. Communications with them have been cut.

The NTC has sent envoys to neighbouring Niger to try to stop Gaddafi and his entourage evading justice by fleeing across a desert frontier toward friendly African states. A convoy arrived in Niger this week, but Niger says Gaddafi was not in it.

“We’re asking every country not to accept him. We want these people for justice,” Fathi Baja, the head of political affairs for the NTC, told Reuters in Benghazi, saying the ousted leader may be close to the Niger or Algerian borders, waiting for an opportunity to slip across.

“He’s looking for a chance to leave,” Baja said.

Another senior NTC official said Gaddafi was tracked this week to an area in the empty Sahara of Libya’s south.

But NTC officials near Bani Walid in the north said they believed two of Gaddafi’s sons and possibly the leader himself were inside the town.

“That would explain why Bani Walid is resisting,” NTC negotiator Abdallah Kanshil said of reports of Gaddafi’s presence in the town. “His two sons are definitely there.”

Where is Gaddafi?
The Pentagon said it knew nothing to indicate the fallen leader had left Libya. Niger, which took in his security chief this week, insisted Gaddafi had not crossed its border.

Washington said it had also contacted the governments of Niger, Mali, Mauritania, Chad and Burkina Faso — a swathe of poor former French colonies which benefited from Gaddafi’s oil-fueled largesse in Africa. The State Department urged them to secure their borders and to detain and disarm Gaddafi officials.

Gaddafi and his son Saif al-Islam are wanted for crimes against humanity by the International Criminal Court in The Hague. British Foreign Secretary William Hague said any country where he was found should hand him over to be tried, remarks that were echoed by US ambassador to Libya Gene Cretz.

With his overthrow, however, have come revelations of the extent to which US and British officials were until recently cooperating with Gaddafi — once a pariah in the West but rehabilitated by Washington and London in the past decade.

Papers found by Reuters in Tripoli showed a British arm of US-based General Dynamics was modernising tanks and troop carriers for a feared brigade led by Gaddafi’s son Khamis, as recently as late January.

The firm said the military vehicles might have been part of a $135-million 2008 contract, part of what it termed at the time “the United Kingdom’s initiatives to improve economic, educational and defence links with Libya”.

Peter Bouckaert of Human Rights Watch said: “The lesson is that if you are going to sell weapons to dictators, at some point down the line you’re going to be deeply embarrassed.”

In al-Qalaa, a town about 120km south-west of Tripoli, thousands of people gathered to bury the bodies of 35 people they said were discovered nearby, their corpses packed into a shipping container.

“There are still many crimes and graves, and we will discover them,” said Moqtar Fernanah, head of the military council for the western region, speaking at the funeral.

“Our answer will be to capture these criminals and turn them to the courts for fair trials. They will be punished in accordance to the crimes they committed.” – Reuters