Lightening up the fest 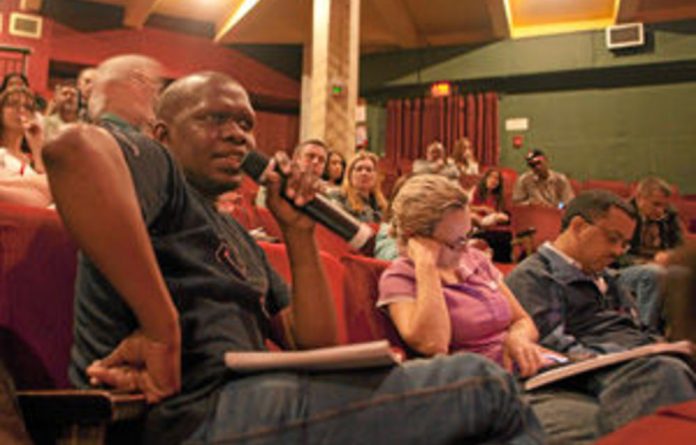 In the darkened foyer of the Market Theatre last Sunday morning South Africa’s science fiction It Girl was forced to defend herself against rumours that had emanated from the main ­theatre just minutes before.

Standing in front of the Boekehuis Bookshop table, which was offering stacks of some of South Africa’s best current literature, Lauren Beukes explained to a fan that she had not actually said at a recent Cape Town book launch that she was sick and tired of “boring memoirs of old
white farts”.

She was, she exhaled with a tinge of exasperation, misquoted by a journalist from a Cape Town newspaper. Wearing a frilly black mini-dress and flats, her blonde hair loose around her freckled face, Beukes, who recently won the Arthur C Clarke award for her novel Zoo City, explained what she had said. It went something like this: there is a cliché that South African literature is about the white man’s journey into the interior of the country’s landscape and his own head, and that, she meant to make clear, it’s about much more than that and always has been.

Beukes, at a vibrant, wickedly smart 35, has obviously been busy turning those notions on their misguided heads with her own work.

But considering the circumstances from which the rumours had come — the M&G’s LitFest session eight, a discussion by three not-so-boring old white farts and their memoirs — it was an important point to get right. Especially since it was old white fart #1: former intelligence minister Ronnie Kasrils, author of two not-so-boring struggle memoirs, who had brought the apparently misreported comments to the audience. He was responding to the importance of apartheid history told “for now, for the future and for the young people to know and understand”; for a populace that appears to be ­consumed entirely in the now.

Understanding our reality
The issue of young and old, past and future, memory and forgetting, underlined much of what came to unravel finally at the weekend.

Opening night headlined with Professor Karl von Holdt, director of the Society, Work and Development Institute at Wits University, who spoke about The Johannesburg Moment — expounding on his book on the subject which, he said, would bring the ideas of the social theorist Pierre Bourdieu, who died in 2002, from Paris to Johannesburg to help reconstruct and understand our very different reality at the tip of Africa.

Drawing on the “Durban Moment” of Steve Biko, Richard Turner and Black Consciousness in the Seventies, he led the audience into the deep end of today’s Jo’burg, a conflicted, corrupt, crime-ridden city of shifting social orders.

Sitting on the dimly lit stage, crimson curtains as his backdrop, a rickety wooden table to balance against, Von Holdt took the audience on a romp backwards and forwards — the all-things-rooted-in-apartheid-past that we seem to wallow in, yet at the same time hurtling us forward into an unknown, a place with no one master narrative to hang our heavy heads on.

The question was, where to from here? “Are we the second-greatest city after Paris?” Von Holdt asked his audience. “Or are we a Third World slum?”

A state of stuckness
But the festivalgoers themselves seemed to underline a point of stuckness. If you took a syringe to the Weekly Mail of old to extract a sample, a bit of original DNA, if you will, of Mail & Guardian readers, you would have come up with this largely pale crowd: greying academics and activists, pointy headed intellectuals and some ageing hippies, with
the tiniest pinch of young black Jo’burg hipsters.

The venue, too, harked back to the Mail‘s original book festival, held there so many years past. The Market Theatre continues to be an outpost island for the arts, wanting to be part of the Newtown rebirth, holding out for something better, even as barbed wire surrounds a hopeful mall-to-be just across the pavement, which pulls it, too, towards a state of stuckness.

Some might have called the opening address too dry, too white, too much past, too little future, punctuated with a showing of William Kentridge’s 1989 Johannesburg, 2nd Greatest City after Paris. Opening night didn’t set the pitch of the festival but certainly set the theme, one that wove throughout the stimulating conversations of the weekend. Von Holdt’s utterings might have been thick thoughts to wrap your head around on a Friday night of sparkling wine and samoosas, but it was heady stuff.

As one festivalgoer snorted: “Dry is the new wet.” Besides, by first thing Saturday morning, it was ­pouring.

An explosive start
Mngxitama, of course, dominated the conversation with his everything-in-black-and-white mantra that included a confession. “I wish I was white and rich,” he shot out. “I would spend my money and go on holiday and have slaves work on my farm.” It was a vibrant panel that ran the race gamut from Mamela’s “whiteness is a material state of comfort” to Krog’s comment about race and politics that hit a reality checkpoint that reverberated throughout almost every session.

“The only person who has a plan in this country is Malema,” she said.

One author immediately accosted Van der Spoel after the morning panel, shocked at what passed for discussion at a literary festival.

“Of course, it was literary,” she said later. “This is not an academic forum and to say so is to disregard literary non-fiction.”

But it was a thirtysomething young man, who told me only that he was “in finance”, who succinctly wondered aloud during the Saturday lunch break while perusing a recent issue of New Frank Talk: “Where is everybody? How can these theatres not be completely full?”

Nabbing the next generation
Beukes was the one who gave me the short, sad answer: “Books,” she said, “are totally unhip. Besides, they’re expensive. They are a luxury for the middle classes.”

Still, there is hope. Saturday afternoon’s session with M&G‘s chief fiction reviewer Jane Rosenthal, novelist Leon de Kock and City Press books editor Karabo Kgoleng talked up some suggestions on how to get young people interested. They threw ideas so far out of the literary box they bordered on book blasphemy: product placement, perhaps, in soapies like Generations, a biography, maybe, on Khanyi Mbau and celebrity endorsements. Still as bizarre — and perhaps as unpalatable — as the suggestions might be to many of the literati, getting the youth to read is a crucial part of wherever it is we are trying to get to from here.

Without them, we’re doomed. So, actually, thinking out of the book box and doing whatever it takes to bring them into the literary conversation — and merging the past and the future — is exactly where we need to go to unstick ourselves.

As Beukes tweeted later: “Some of my best friends are old white farts.”

Here’s to next year’s festival, one that should bring new strands of DNA to the M&G sampling, mixing those academics, activists, hippies and intellectuals with a smart and substantial overflow of Jo’burg’s hippest young hipsters.

Tanya Pampalone is the features editor of the Mail & Guardian

For more from the M&G Literary Festival, see our special report.

Why the geeks will inherit the Earth

In cruise mode: Living the high life on the high seas