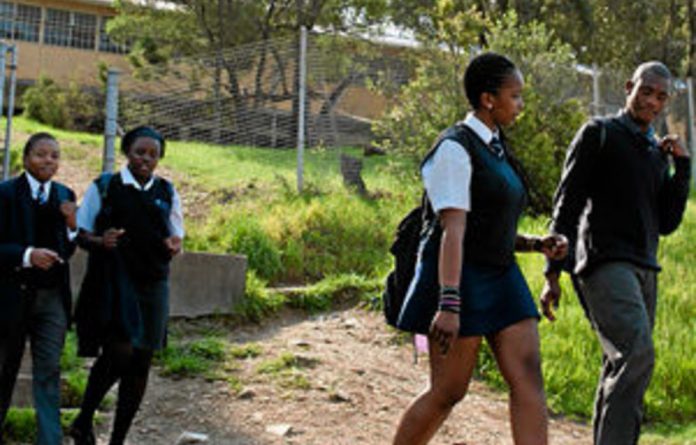 Prosecutions boss Menzi Simelane’s decision to authorise the prosecution of children between the ages of 12 and 16 for having consensual sex has outraged children’s human-rights activists.

The Mail & Guardian knows of two groups of schoolchildren who have been charged with contravening the Sexual Offences and Related Matters Act of 2007, which the National Prosecuting Authority (NPA) says makes it a criminal offence for any person to engage in “consensual sexual penetration” with a child.

“Why is the NPA criminalising consensual sexual behaviour between children when it should be focusing on the real crime in South Africa?” asked Carina du Toit, an attorney at the Centre for Child Law at the University of Pretoria. “It’s a waste of resources and time. This should be dealt with by the social-development system.”

The Centre for Child Law is challenging the relevant sections of the Sexual Offences and Related Matters Act in the North Gauteng High Court on behalf of the Teddy Bear Clinic for Abused Children and Resources Aimed at the Prevention of Child Abuse and Neglect (Rapcan).

The organisations want the sections declared unconstitutional because they criminalise the consensual sexual behaviour of teenagers between the ages 12 to 16. A date for the hearing has not been set.

Last month, the NPA announced that Simelane had authorised the prosecution of six pupils from Mavalani High School in Limpopo, who appeared in the Giyani Magistrate’s Court on charges of consensual sexual penetration while under the age of 16. One of the children was pregnant. The move was welcomed by Limpopo health and social-development minister, Dikeledi Magadzi, according to her spokesperson, Joe Maila. “We believe it will act as a deterrent and help children to refrain from engaging in sexual activity. Teenage pregnancy is a huge problem in the area,” he said.

NPA spokesperson Mthunzi Mhaga said that the children were released on a warning.

“However, we have noted with concern that this problem seems to be continuing unabated as we continue to receive similar cases. The common denominator is alcohol and unprotected sexual intercourse,” he said.

“The national director of public prosecutions is, therefore, making a clarion call to all members of the community, including parents and teachers, to monitor the behavioural trends of learners and children in general, as the NPA cannot deal with this scourge alone.”

The NPA’s intention was to divert offenders from the criminal justice system, said Mhaga. Their cases had been postponed to September 16 for offender assessment and victim-impact reports, which would inform decisions on how to deal with the issue in future.

In January the media reported that there were 57 pregnancies at Mavalani High School. Eighteen pupils were later arrested for rioting in protest against the reports.

Mhaga said this week that the NPA was working closely with the social development department. As a result of the NPA monitoring the situation and charging children in terms of the Act, it had been established that some children had been raped and others were living with their boyfriends while in high school.

“It’s a scary situation. I strongly believe that parents should step in and demand to see what is on the cellphones of children,” he said. “Because of easy access to the internet, the downloading of explicit content is a serious challenge as it now stimulates this unacceptable behaviour. The national director of public prosecutions has the interests of these children at heart, hence the call for community involvement.”

A statement posted on the NPA’s website announced that Simelane had decided to withdraw charges against three students, two of them from Jules High School in Johannesburg, who were captured on cellphone camera having sex at school last year. The three children had completed a diversion programme, wrote Mhaga.

“[Simelane] was furnished with three reports from the Teddy Bear Clinic, where they were attending the diversion programme,” said Mhaga in another statement. “All these reports have shown that they have successfully completed the programme and have shown change in behaviour. Indications are that they have shown remorse and have taken full responsibility for their actions by attending and completing the programme. We are confident that, through the programme, we have managed to address their criminal behaviour by giving them an opportunity to readdress their lives.”

However, Shaheda Omar, the deputy director of the Teddy Bear Clinic, described the children’s placement in its sexual offences diversion programme as “challenging”.

The programme is usually reserved for those who have committed serious sexual crimes.

“So many children are sexually active now, why are they criminalising the matter?” asked Omar. “The children were forced to go on the programme, but they did learn things such as life skills.”

Insiders at Jules High said that it was initially feared that the girl had been raped, but that the NPA had ultimately construed the event as consensual sex between minors.

The girl did not return to the school and the boy was expelled on orders from the education department. The other boy came from a different school. The M&G was informed that all three have found places elsewhere.

Responding to the high court challenge, Simelane said in his court affidavit that if the diversion programme was completed successfully, the criminal case would be withdrawn or converted in terms of the Children’s Act. This meant that minors would not have a criminal record, nor would their details be included on the national register for sexual offenders.

Free contraception a successful option
Prosecuting teenagers for having consensual sex is not the only way of tackling the scourge of school pregnancies, a Cape Town school has demonstrated.

Ismael Essau, the deputy principal of Vista High School, said that a few years ago, there were 20 pregnancies in the school, a cause for concern. “The educators came together and thought about what we could do. We got the nurses in to educate the children and give them birth control if they need it,” he said.

“We have children queuing for birth control when the clinic opens once a month. Now, we mostly have less than 10 pregnancies a year, which shows that our method is working.”

This approach would appear to chime with expert opinion presented in North Gauteng High Court on behalf of the Teddy Bear Clinic and Rapcan by Professor Alan Flisher, a child and adolescent psychiatrist, and Anik Gevers, a clinical psychologist and researcher specialising in child and adolescent mental health and wellbeing.

Both experts said they believed that sections 15 and 16 of the Sexual Offences Act tended to heighten adolescents’ vulnerability rather than protect them from harm.

These sections curb healthy development, with a potentially long-lasting impact, they warned.

“In a country struggling with sexual violence every attempt needs to be made to promote healthy, safe, consensual sexual behaviour and prevent unhealthy and violent sexual behaviour,” the experts told the court.

Currently, policy on whether to distribute contraceptives at school rests with the school governing body. A mooted government plan to distribute condoms at schools appears to have stalled after certain religious groups, nongovernmental organisations and principals objected, it was reported earlier this year.