9/11 commemorations draw to a close 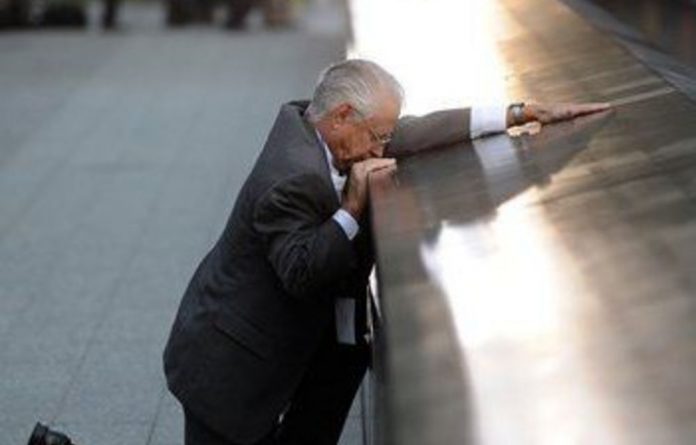 The ceremony of reading the names of the nearly 3 000 people killed a decade ago on September 11 2001 ended on Sunday in New York with buglers playing taps.

Earlier, President Barack Obama was among dignitaries attending the annual ritual commemorating the dead of 9/11.

Relatives of victims read out the names next to the new memorial at Ground Zero, consisting of two huge black fountains on the exact spots where the Twin Towers used to stand. After the last name was read out, uniformed officers played the haunting tune of taps.

Painful memories
Tears flowed and bells tolled as Americans marked the 10th anniversary of the 9/11 attacks in a rare moment of unity for a country still shaken by the horrific attacks.

Obama and his predecessor and political foe George W Bush stood together in New York for the main ceremony at the site of the destroyed Twin Towers.

Obama then flew to the crash site of Flight 93 in Pennsylvania where he laid a wreath ahead of his next stop at the Pentagon.

At Ground Zero, the Stars and Stripes fluttered from cranes used in the massive project to rebuild the World Trade Centre, while below relatives of 9/11’s 2 977 victims brushed fingertips across the names of their loved ones etched in bronze around a new memorial.

With federal officials warning of a new terrorism scare, lower Manhattan was under police lockdown. Security in other major cities was also tight, as Obama called for a “heightened state of vigilance”.

Ceremonies
The ceremony began in New York with a procession of bagpipers and singing of the national anthem before a bell signalled the first of six moments of silence marking the times when the four hijacked airplanes hit their targets and the Twin Towers collapsed.

The sky over the Big Apple was initially clear, recalling the brilliant backdrop to the horrific surprise attack on the World Trade Centre, where 2 753 of the day’s victims, including 343 fire-fighters, died in the inferno of collapsing skyscrapers.

As every year since September 11 2001, relatives of the dead took turns reading out the names, a heartbreaking litany accompanied by virtuoso cellist Yo-Yo Ma.

Readers fought to keep emotions in check as they pronounced loved ones’ names. “I’ve stopped crying but I haven’t stopped missing my dad. He was awesome,” one young man said.

“From the depth of my soul,” a sobbing woman called out to her deceased husband, “we will always miss you”.

Optimism
Reflecting a growing sense that it is time to turn a corner from 9/11, the Ground Zero ritual this time was accompanied by signs of optimism.

Instead of the chaotic-looking construction site and vast pit that scarred lower Manhattan for years, the ceremony now features a gleaming, three-quarter-built One World Trade Centre tower and other signs of progress.

Sunday also saw the dedication of a simple but moving monument consisting of massive fountains sunk into the footprints of the former towers with the names of the dead inscribed around the edges.

Obama praised the design, saying it “meets the moment,” according to a spokesperson.

The president, who also declared “al-Qaeda is on the path to defeat,” then flew to Shanksville, Pennsylvania — site of the crash of Flight 93.

The 40 victims of that hijacking have often been overlooked in the bigger dramas of the strikes on the Pentagon and the Twin Towers but they were remembered on Sunday as heroes for overpowering their assailants and crashing the plane before its apparent target of nearby Washington, DC.

The president and his wife Michelle laid a wreath of white flowers at a new marble memorial at the site.

“Their uprising marked the moment in history when Americans showed what makes us different. We know there are things more important than our own lives — chief among them, freedom.”

Remembrance
Obama’s last stop was to be the US military headquarters where earlier Vice-President Joe Biden attended a ceremony honouring the 184 people who died when a hijacked airliner smashed into the exterior of the Pentagon complex.

The ceremony closed with an army sergeant playing “taps” and then a stirring rendition of “America the Beautiful”.

The 9/11 remembrances unite Americans like almost no other event. According to a poll last week, 97% of people remember where they were when they heard the news, on a par with John F Kennedy’s assassination.

This year’s event also follows the stunning news in May that US Navy seals had flown into Pakistan and shot dead al-Qaeda founder Osama bin Laden.

While al-Qaeda is severely weakened and New York is recovering, the anniversary still finds a nation struggling to overcome the longer-term impacts of the last decade.

Decade of war
In Afghanistan, where ceremonies were held on Sunday at the Bagram air base and the US embassy in Kabul, US troops are stuck in a seemingly unwinnable war against a Taliban guerrilla movement few Americans understand.

“Some back home ask, why are we here? It has been a long fight and people are tired,” US Ambassador Ryan Crocker said at the US embassy. “The reason is simple: al-Qaeda is not here in Afghanistan and that’s because we are.”

Earlier on Sunday, the US Army said 50 American soldiers were among 89 people wounded when a suicide bomber driving a truck attacked an advance Nato combat post in central Afghanistan on Saturday.

As unemployment and next year’s presidential election become the focus for most Americans, the wars in Afghanistan and Iraq — launched in the wake of 9/11 — can seem a world away.

For at least a day, though, 9/11 was a time to reflect and for the world to recall the surge of sympathy for the US 10 years ago.

British Foreign Secretary William Hague declared that al-Qaeda “is now weaker than at any time in the decade since 9/11”.

But the Taliban hit back on Saturday saying the post-9/11 invasion of Afghanistan by the United States and its allies “will remain a permanent stigma on the face of Western democracy”. — Reuters