Flying high with His Excellency is enlightening 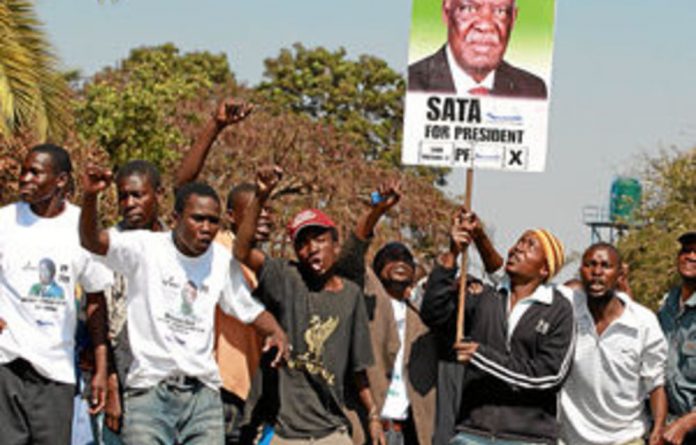 It was immediately clear, sitting on the runway of the Zambian Air Force base in Lusaka, why incumbent Zambian President Rupiah Banda and his party, the Movement for Multiparty Democracy (MMD), have been tipped to win the September 20 elections.

For starters, we — the president, his campaign team (including their American consultant), his doctor, security chief, one South African journalist and assorted others – were about to hit the campaign trail in Zambia’s air force one, munching complimentary chocolates.

An hour later, while opposition politicians were presumably rumbling along on congested and potholed roads to their constituencies, we touched down for a rally in Kasama, 800 kilometres to the north, where we boarded government helicopters and jumped east to Chinsali, to listen to schoolgirls singing Banda’s praises. After that it was on to Lundazi to minister to a great mob, and, finally, at dusk to Chipata, the president’s home town.

The use of government resources by the MMD, and that includes the national broadcaster (Banda’s aides openly ordered television executives about over the telephone), has been one of the most contentious issues of Zambia’s 2011 elections and has shaped the contest in very direct ways.

The key poster of the major opposition, for example, shows the president of the Patriotic Front (PF), Michael Sata, holding his forefinger to his lips above the slogan “Don’t Kubeba”, meaning “don’t tell them” — don’t let on who you’re going to vote for. Or, as PF vice-president Guy Scott explained: “We encourage Zambians to take the bicycles and other freebies the MMD are handing out, because it’s their money anyway, but to quietly vote PF when the time comes.”

The PF leadership seems pleased with this strategy, which makes a mockery of polling information but, as former agriculture minister Simon Zukas pointed out, it’s a strategy with obvious flaws.

“Like it or not, everyone wants to be on the winning side and, if PF support isn’t showing up in polls because they’ve been told not to tell anyone who they’re voting for, there’s a chance non-core PF sympathisers will see the result as a foregone conclusion and stay away,” Zukas said.

During our conversation Scott handed out piles of kwacha to some of his best councillors and when they asked for more, said, “If the money’s there, I’ll give it to you.”

Fighting issues
The MMD campaign is, by contrast, modern, extremely well resourced and has been slickly executed. Banda and his people have fought on issues: infrastructure development, government transparency, job creation and security — not substantiated with the nitty-gritty, it must be said, but far better than a shushing finger. They’ve also thrown in tons of free chitenges (skirts), shirts, caps and even lollipops, all branded with the president’s face, initials and the strapline: “A president for all Zambian people.”

Banda (73) is a solid man who walks with a limp and speaks in extremely low but gentle tones. His face is equal parts Morgan Tsvangirai, Zimbabwe’s main opposition leader, and Colin Powell, the former American secretary of state — a grandfatherly, benevolent mien, which his campaigners have put out front. And he is genial, a real charmer.

“He’s a beautiful, humble man, much like Madiba,” gushed Andrea Breytenbach, the owner of Mama Rula’s B&B on Zambia’s border with Malawi.

After a day of red carpets being rolled out across the veld in Banda’s honour it took me aback to hear HE (his excellency, as his aides call him), suddenly addressed so familiarly and in such a thick Afrikaans accent.

The story of Banda and the elderly Breytenbachs, from Chinoyhi, Zimbabwe, who came to Zambia when they found themselves on the wrong side of Zimbabwean President Robert Mugabe’s land reform programme, is touching. Banda was living on his nearby farm when his cousin “told me about some Afrikaners that had imported apartheid” — they were turning black Zambians away from their lodge. He went to test the claim, was invited in for a drink instead, and the friendship has withstood his elevation to vice-president and looks set to outlast his presidency.

But Banda’s friendliness is no consolation to the millions of Zambians living outside the formal Zambian economy (only 300 000 out of a population of more than 13-million are formally employed). To many, Banda is too accommodating, especially to big business.

“Our core problem is analogous to the South African situation, where you have a growing but resource-based economy increasingly presided over by a fairly corrupt black elite, which delivers a diminishing number of jobs,” said Scott.

Banda’s predecessor, Levy Mwanawasa, was, before his death in 2008, widely regarded as a progressive president who determinedly grew the country’s anti-corruption architecture from scratch, opening the way for corruption charges to be laid against his predecessor, Frederick Chiluba.

Political deal
For Zukas, the president’s failure to build on Mwanawasa’s anti-corruption legacy has been a disappointment. “There’s no question that he interfered with the courts to get former president Chiluba off corruption charges. He made a political deal — Chiluba was to have campaigned for Banda in his home province in return for the dropping of charges,” Zukas said.

Banda denied that there was any deal, but admitted the people of Chiluba’s home province “felt the MMD had persecuted one of their sons”.

“If you dig into what Chiluba did, you will find that he was one of the greatest presidents for most of his rule. He stood up to one-party rule and delivered pluralism to the country. For me to forget all that and take the line of his critics was impossible. I could spend all my time bringing people up on charges, but I prefer to go forward,” he said.

Banda’s defence of his anti-corruption track record was significantly undermined by the release of American diplomatic cables by WikiLeaks in early September. According to an October 5 2009 cable, Banda was told by the vice-president of the World Bank that he should address the perception that he was soft on corruption. “Banda said it would be easier for him to tackle corruption problems and the associated perception when and if he is re-elected,” read the cable. “Banda insisted that he did not fire taskforce leader Mark Nkole; he simply decided not to renew his contract. When pressed for his reasons why, Banda responded that he needed people ‘who are loyal’ to him.”

Banda said his critics should look at his achievements. “I’ve promised a stronger democracy and delivered on that. I’ve given the country a free and fair election and I’m about to give them a second. I have strengthened the auditor general, which is a key institution for the fight against corruption.”

Banda’s biography explains some of his strategic cautiousness. He was appointed ambassador to Egypt at the age of 27, ambassador to the United States at 29. He cut his diplomatic teeth when Zambia was a frontline African state, grappling with the complex dynamics of the Cold War. Caution has been his second name. His predecessor, Mwanawasa, famously criticised the rule of Mugabe. Banda should not be looked to for more of the same. “His strategy was applauded by certain interest groups, but it failed. You must forgive Zambians after years of Cold War politics for taking a break and focusing on domestic issues. We are rebuilding our country. That is our core focus now,” Banda said.

Asked why he had supported the decision to squash the Southern African Development Community tribunal, and how he would counter the criticism that regional human rights had been sacrificed to serve the interests of ruling elites, Banda said that “ruling elites have their share of rights too”, before seemingly thinking better of the explanation. “To be honest, I don’t have an answer for that one.”

We return to Lusaka after dark, to the twinkling of the escort’s lights, and sail towards State House on empty roads — the traffic was stopped by police on foot. It’s an extravagance that would be easy to ham up, but I’m chastened by the aide with whom I share a car.

“I think it’s great that we have a president that is happy to open his campaign to a foreign journalist, to tell all his staff that his questions are to be answered, who breaks bread with you and who takes the time to answer your questions himself. Would that happen elsewhere in this region?”

Zambia’s guardian is quite a guy

Zambian police have used batons and teargas on a crowd of opposition activists outside a police station where their leader had been summoned.
Read more
Africa

The Lusaka Magistrate's Court has heard that, Henry Banda received US$550 000 from an oil deal, facilitated by his father, with a Nigerian company.
Read more
Africa