Taxi airline to boldy go where others are ‘scared to travel’ 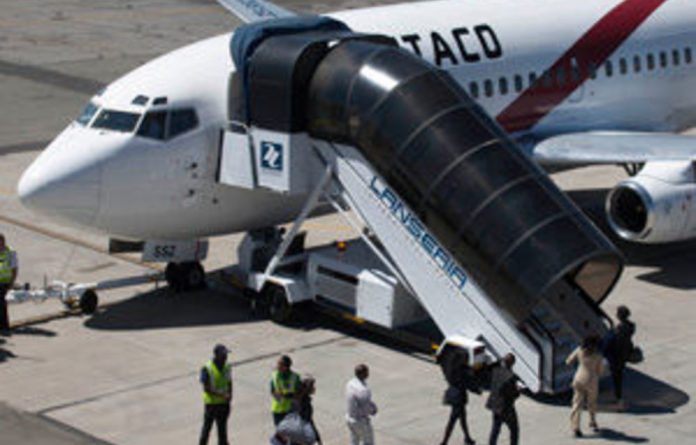 A new airline intended to open up the skies to taxi commuters was launched at Lanseria airport, north of Johannesburg, on Friday.

Santaco airlines, the brainchild of the South African National Taxi Council, would offer flights between Lanseria, Bhisho in the Eastern Cape and Cape Town.

“This is a historic day for the taxi industry … We are not rewriting history, we are part of the history of South Africa,” Santaco secretary-general Philip Taaibosch said at the “proof-of-concept” launch.

“We are taking the black community … which has been suffering for many years … to the promised land.”

“The taxi industry has come of age. In the seventies, it was small, uncoordinated, narrow. Over the last 30 to 40 years, the industry has become a major player.”

Taxi council president Jabulani Mthembu said the aviation industry was a tough one to break into, but Santaco would “travel where everyone else is scared to travel”.

He said the low-cost airline would bring dignity to those whose only experience of aviation had been seeing a plane above their rooftops.

Mthembu said the airline’s target market would be people without a car and large income. The airline may also cater to people wishing to travel with their goats. He said Santaco was also looking at the logistics of providing flights to those without internet access or credit cards.

“We will have finalisation of all the details in a month’s time to deal with all the blockages.”

“We are bringing the taxi operation on-air,” Mthembu said, adding that the service was expected to launch commercially at the end of the year.

A little more than taxi fare
Santaco’s chief executive, Bongani Msimang, told the Mail & Guardian that the company was still finalising the cost of the air tickets, but said they would be considerably cheaper than flying to that part of the Eastern Cape with other airlines.

‘It will not cost more than R800 for a single trip from Johannesburg to Bhisho,” he said.

This would be more than a taxi fare to the Eastern Cape from Johannesburg, but much less than current air tickets that he said ‘cost as much as R2 500”.

Msimang said the airline would have a higher load factor and therefore be more accessible and affordable than current airlines flying to the Eastern Cape.

He said that by providing taxis to and from airports, people would not have to rely on metered taxis and this would also increase the number of airline users.

‘People will take a taxi from their doorstep to a taxi hub and then be taken to the airport. From the airport they will fly to their destination. Then they will catch a taxi to that city’s taxi hub.”

‘More people will consider the issue of flying if they know they have available transport when they reach their destination,” added Msimang.

He said the South African taxi industry transported 15 million people already and had experience providing affordable transport to the majority of citizens in the country.

‘About close to 10% of taxi users travel long distance routes already so there is a market [of people who want to] travel far,” he said.

Msimang also said that Santaco was not leasing an airline and crew from AirQuarius.

Instead, he said they were leasing planes and crew from another company called Air Cargo. – Sapa

The sterrings of the journey