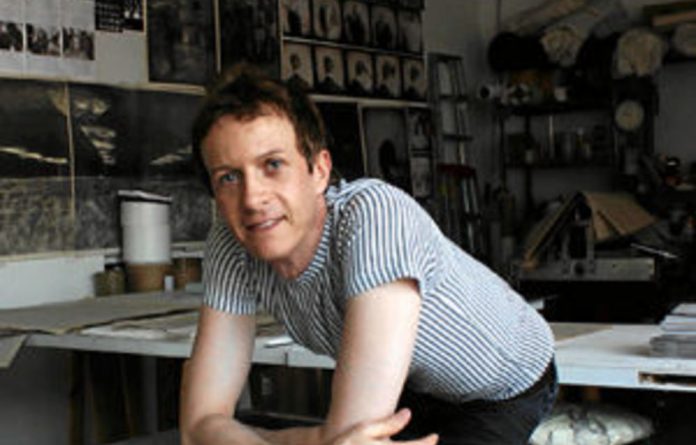 When Ross Douglas was researching international art fairs, looking for a model that would work in South Africa, he realised a local iteration needed a special project that was outside the highly commercial imperatives of other art fairs. So when he launched the Jo’burg Art Fair in 2008, it encompassed an exhibition by a featured artist.

It was an opportunity to showcase a practitioner who wouldn’t ordinarily have exhibited at the fair and to unfold a body of work without the constraints of being squeezed among a gallery’s other artists. It has become a collaborative process realised with little constraint and no charge to the artist.

A walk on the arts sideArts editor Matthew Krouse guides us behind the scenes of the 2011 Jo’burg Art Fair to see what galleries are showing at the biggest art exhibition of the year.More videosIn the first three years the featured-artist programme was sponsored by Gordon Schachat, starting with Robin Rhode, and followed by Jane Alexander and Siemon Allen. With two of these artists living and working outside South Africa, and one who rarely shows here, the programme has certainly fulfilled its expectations. This year Douglas is going ahead with the programme, without Schachat’s sponsorship, and has selected Paul Emmanuel as its fourth recipient.

“It’s not a competition,” says Douglas. “It’s about things coming together in a particular time and place. We try to find special projects that have an interesting back story.”

He was particularly intrigued by Emmanuel’s story: importing large and cumbersome lithography tools, gathering many investors to make the project possible, and the artist’s intensive working process. In association with the project management company, Art Source, and the gallery, Art on Paper, Emmanuel is exhibiting a new series of five stone lithographs and an existing video projection.

It occupies a more modest space than the vast area required for Alexander’s monumental installation, Security, in 2009.

Emmanuel, one of the country’s most proficient printmakers, has produced the five lithographs using the manière noire technique, in which the stone is coated with black ink and the eventual image is scratched out of the dark surface. In this process of taking away, in its negative effect, the work redoubles the artist’s interest in visual forms that emerge out of instances of absence and loss. Reversing the more familiar convention of making dark marks on a light surface, these new works at times resemble the photographic negative or x-ray image.

Sensitive surfaces
Not surprisingly, Emmanuel is taken with sensitive surfaces that are receptive to forming impressions, notably traditional photography where there is a special relationship between the negative and the positive print. “I like the metaphoric relationship between forming an impression and the memory of that impression,” he says. “I like that the photographic negative is an intermediary state, one step on from light bounced off the subject and one step away from reverting back to the positive image in a conventional photographic print.”

But about printmaking itself, Emmanuel is still emphatic: “There is something appealing about making an impression, about ‘bruising’ the paper’s surface. I like that paper can be as touch sensitive as skin.”

Drawn to touching things, the tactile quality in Emmanuel’s work is often palpable. “I’m often seduced by surfaces and textures. Even air has a texture, substance that can be ­rendered visually.”

Emmanuel is easy with the rigour of intensive and ultimately time-consuming mark-making: “I like gently scratching away layers of darkness to work up the light and often I get lost in the action of scratching the images.”

There is masochism too in the physical labour of holding a blade so tightly that your fingers bleed, in binding your fingers with thick plasters to be able to continue to scrape away the dried ink that builds up the tones of skin on someone’s neck, or the steel hand rail at a train station.

Buying into artThe FNB Jo’burg Art Fair brings over 500 artworks, 200 artists and 20 African galleries together this year. The event will showcase art from around the continent, as well as encourage investment in and support for creative industries. This year’s selection features work by emerging artists alongside pieces by some of the biggest names in African art.More slideshowsEmmanuel pre-sold some of the lithographs in this series on exhibition, enabling him to finance his short film, 3SAI: A Rite of Passage. It is unclear whether this was the right investment, even with the film’s somewhat obscure accolades.

There is a clear historical reference for Emmanuel in the making of the film: “South African white men in their 40s and early 50s would have been conscripted into the military during the 1980s.

Anti militatry
“I never did military service but my older brother did and did duty in the border war. He was 19. He was conscripted into a political system as well as a belief system.”
As examples of his interest in the effects of this system, Emmanuel cites films such as Kaptein Caprivi (1972). Narrated by ex-state president CR Swart, it peddled a journey from childhood to adulthood in which fighting for apparent peace and harmony brought only pride and honour. In trying to explore the connections between sexuality, masculinity and patriarchy, Emmanuel emphasises that he is not anti military: “I do have strong feelings about the military, but I don’t think my film is an overtly anti-military statement.”

However, in the unfolding of Emmanuel’s own film, the precision of an apparent meditation on hair cutting as a ritualistic induction for new recruits is smudged by indifferent filming, lighting and editing. Unlike the complexity of the lithographs, in both their process and the finished works, there is nothing engaging in a film that too often slides first into ambivalence and then slips further into sentimentality.

In the six years Emmanuel has devoted to his Transitions project, he has returned to complex histories where the shadows of events past are cast over the present and appear to extend and disappear into the future. In running his hands over these transitional moments between the meaning and meaninglessness of memory, Emmanuel has produced striking renditions of these liminal places in especially installation and print form.

Rory Bester is an art historian at the Wits School of Arts. The FNB Jo’burg Art Fair is on at the Sandton Convention Centre from September 23 to 25.

New curator on the block