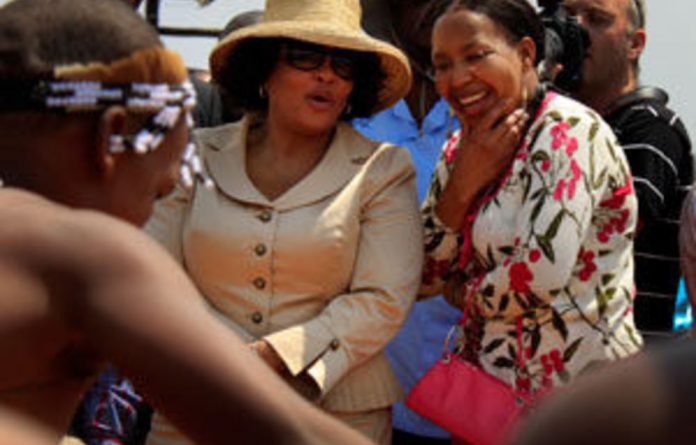 Jo’burg’s high society can bundu-bash in their own back yard after Gauteng’s minister of economic development, Qedani Mahlangu, officially opened the dusty Dinokeng Game Reserve — in a pair of snazzy pink high heels.

The reserve, based in north-east Gauteng, is a joint initiative between government, land owners and community members of Tshwane, which aims to boost economy through various tourism projects in an area. CEO of the Dinokeng project, Fana Jiyana described the region as “underdeveloped and economically depressed”.

The opening ceremony, which took place on World Rhino Day on Thursday, had already been marred by reports in the media of rhino poaching and vandalism.

According to the New Age, police are investigating an unnamed “self-proclaimed chief” who allegedly sold pieces of land inside the reserve through illegal title deeds. The same man is accused of encouraging community members to vandalise park fences, which has cost the department millions to repair. More 200 cases have been opened against him.

At the ceremony Gauteng premier Nomvula Makonyane, asserted that the project was initiated with the input of the community.

“These individuals involved in vandalism have their own hidden agendas, they do not share a popular view with the community and they only want to benefit themselves,” she said.

Makonyane affirmed that there is tight security at the reserve and that animals are tagged for monitoring.

Jiyane said the opening of Dinokeng marks a historical event in the province. “Others have mountains and beaches tourism operators can stop selling other routes outside of Gauteng. Now we have a world-class game reserve within an hour’s drive from Johannesburg.”

CEO of Gauteng Tourism Authority, Dawn Roberts, acknowledged concerns that locals might not be quick to take a holiday due to inflated prices.

“We want holidays to firstly be affordable to ordinary people. We have begun a campaign to encourage lodge owners to offer low-cost packages to residents on weekends and off-peak seasons.”

Jiyane jokingly told Mahlangu that her extravagant attire was inappropriate for the occasion but quickly added: “Maybe Gucci will design bush wear in the future.”

ANC candidates list filled with people accused of crimes, but too late to make changes

Basic income grant not on treasury’s watchlist — yet